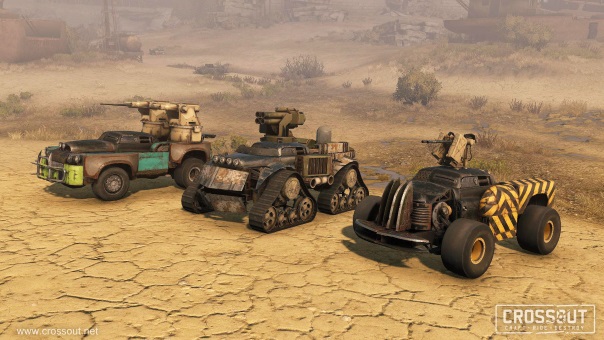 Update 0.8.3 for Crossout drops today, which adds new game modes for PVP and PVE to the post-apocalyptic MMO action game. The new PvP mode is called “Bedlam” and is open to all Crossout players, regardless of their level. Respawns in this mode are unlimited, allowing players to put their constructions to the test against other players and quickly find out which parts of their design work and which don’t. Once the ride is perfected, the unforgiving battles of “Bedlam” are a great way to improve tactics and teamwork. The new PvE mode is “Frontier Defense” and is located on the site of a destroyed chemical plant. A valuable artifact of the old world has been uncovered, and players choose to take a short route through the flooded passages, or the easier-but-longer detour to get to the rear entrance of the plant. From there, players either navigate the area in a few different ways to try and get the artifact. It promises to be a difficult task, but one worth undertaking. All AI enemies featured in Crossout’s PvE modes have seen a significant rework to represent the different factions more closely present in game. Having learnt additional tricks, the AI is now far more dangerous in battle. The “Lunatics” faction, for example, will show up in large numbers and prey on the player with the least amount of hit points in close combat. “Nomad” enemies will employ modern technologies like drones and stealth generators and generally favor combat from a distance. The factions opposing the player in PvE change regularly, making it necessary to also change tactics as well. For now, AI enemies of the Lunatics, Nomads, and Scavengers are available. With future updates, reworked enemies of the other factions will be added as well.