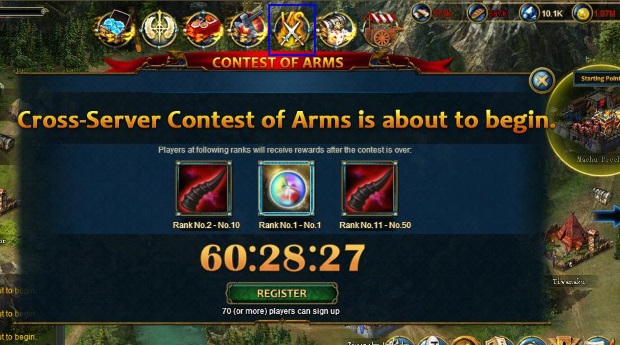 It is time to sharpen your blade and mend the chinks in your armor. Siegelord‘s cross server battles are about to commence- are you prepared for all out war? The fate of Thieden lies in your hands. It is up to you to tip the balance and ensure your faction’s total supremacy.

1. What I should do before I join the contest?
Before you join the contest, you need to register first. The registration is only available from March 17th 4.00AM to March 19th 7.50PM for who have reached LV.30 in servers 1-20.

3. What is the fighting format?
This contest is a collection of individual battles against players in other servers.

6. How can I use the voucher?
You can use vouchers to exchange senior resources in the voucher store. (Some of these resources can’t be acquired in any other way!)

7. Are there any other ways to get vouchers?
Except for joining the battles of this contest, you can also get vouchers via merit chests, ancient ruins and other recharge rewards.

8. How will the winners be determined?
After each battle, you will be given a rank which will be refreshed in real time. You will be awarded according to your last rank.

Come test your skills and see where you rank among the Siegelord Elite: http://siegelord.37.com