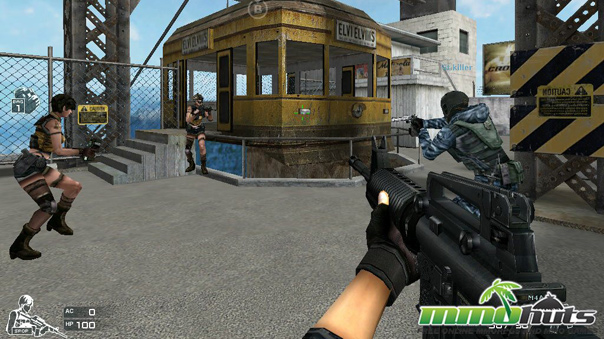 Cross Fire went into open beta at the end of January, making it the first free FPS release of 2009. At first glance Cross Fire looks more like a game from the past decade than a new release. The game’s graphics are similar to the popular Half Life mod, Counter-Strike which was released back in 1999. While some of the game modes do resemble those found in the classic CS, Cross Fire manages to bring some of its own unique features and adds to the formula. I won’t claim Cross Fire is the best free shooter available but it’s a solid game with a small 268 mb download that runs on a large range of computer specs. 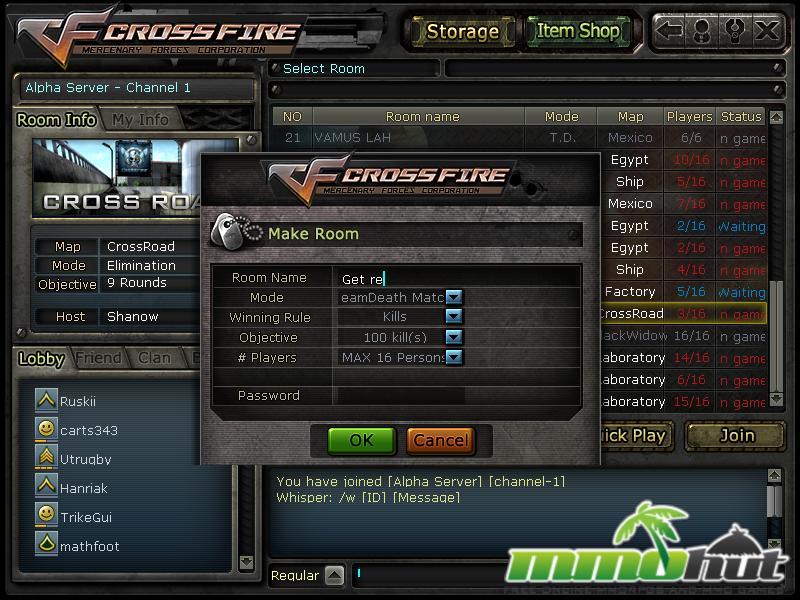 Downloading and installing Cross Fire is quick and painless. Even character creation is steam lined, there is no appearance customization. Instead, players chose from two nearly identical factions; the GR (Global Risk) or BL (Black List) and are taken right to the game lobby. Currently there are 4 servers but only the first seems to have anyone playing on it. I’m not sure how many people are online at any given time but it’s never difficult to find a game to join so no worries there. The lobby is well organized, with a large button on top for the item shop and your storage area. On the left players can track their kill/death and win/loss ratios. Towards the bottom, you’ll see a box that tracks your buddies and clan members who are online. Cross Fire has a short tutorial available for those who are not familiar with first person shooters. There is no reward to completing it but it only takes a few minutes. The tutorial covers the game’s basics; movement, aiming, crouching (ctrl), jumping (space bar), walking (shift), shooting, and finally throwing grenades. 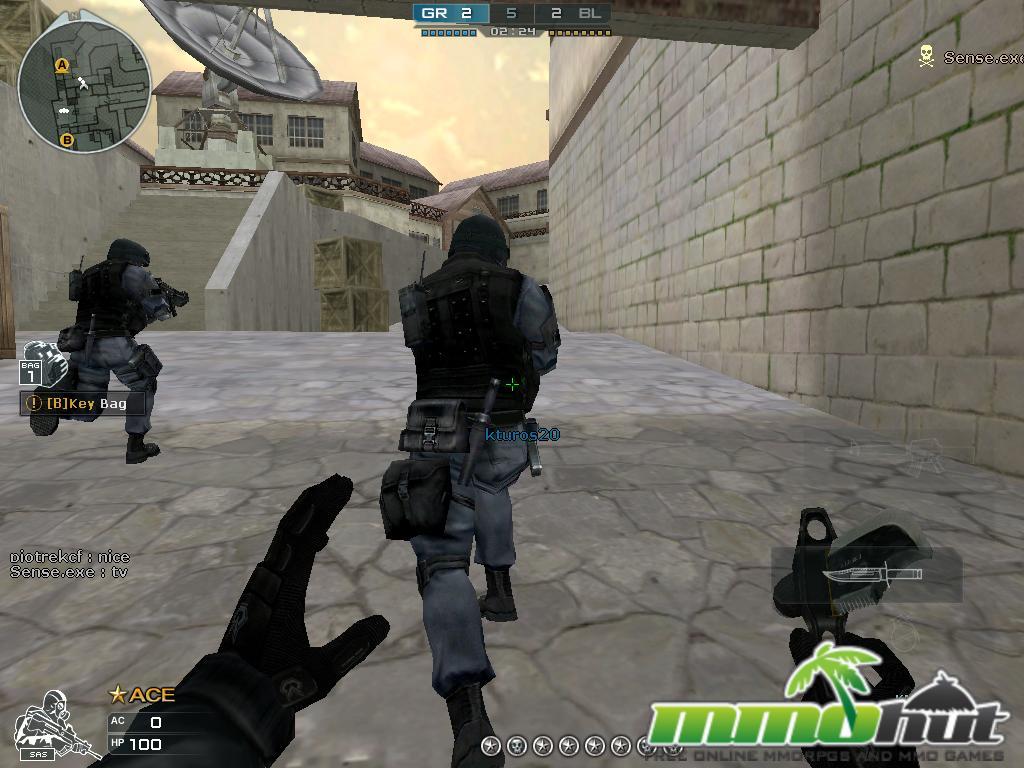 By far the most common game mode in Cross Fire is Team Death Match. Respawn times are low so even if you die, you can get right back into the action within a few seconds. The gameplay in this mode is similar to those of other modern tactical shooters like Combat Arms and Operation 7. Most public games lack any resemblance of team work and cooperation but this doesn’t take anything away from the game’s enjoyment. There are three other games modes and you can check the overview for a full description of each but the only other one worth going into detail about is Ghost Mode. Here, one team can only use knives but are nearly invisible. The ghosts must stalk down the team of regular players without getting noticed and gunned down. The regular players must rely more on their team mates to cover their backs and move with caution, keeping an ear open for footsteps as they advance. As of this writing, there are only 2 maps available for Ghost Mode which is a shame. Even Team Death Math has a paltry 5 map selection. If Cross Fire wants to compete with its graphically advanced rivals in the free to play shooter market, it had better add more maps soon. 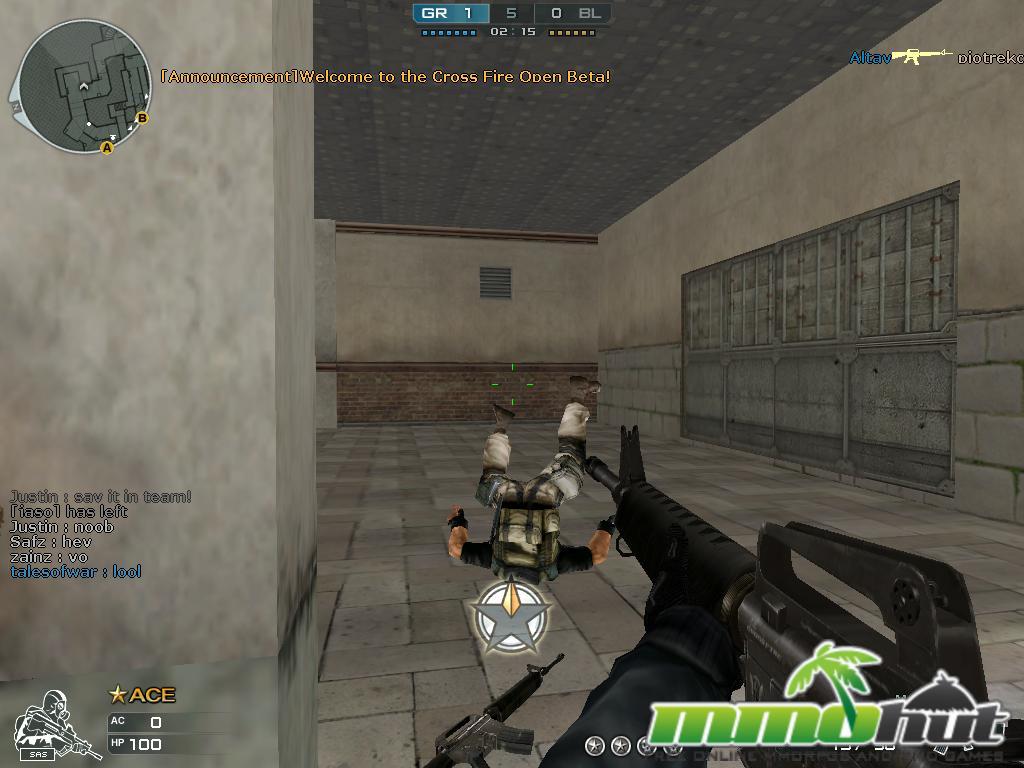 The game currency in Cross Fire is ‘GP’ and new players start with 50,000 of these GPs. Selecting a faction (either GR or BL) costs 4,000 which leaves players with 46,000 to spend or save. The item shop has a total of 16 primary guns for sale though most have rank requirements. There are four available with no rank requirements for players to chose from. The starting gun itself is quite powerful and I had no problem handling it so feel free to save up your GP for a higher ranked gun. Weapons have a heavy cost, usually 40,000+ and it takes a great many rounds to accumulate that much GP so think twice before splurging. Besides guns, the item shop also has spray paints and other accessories for sale. A third bag can be purchased which allows players to carry additional guns with them. There are also three additional character types for sale; SAS, SWAT, and OMOH (Russian special ops.) Each of these has its own type of helmet, backpack, and ammo pouch for sale. Guns and equipment require constant maintenance in the form of repair costs which further chip away at your ability to earn GP. 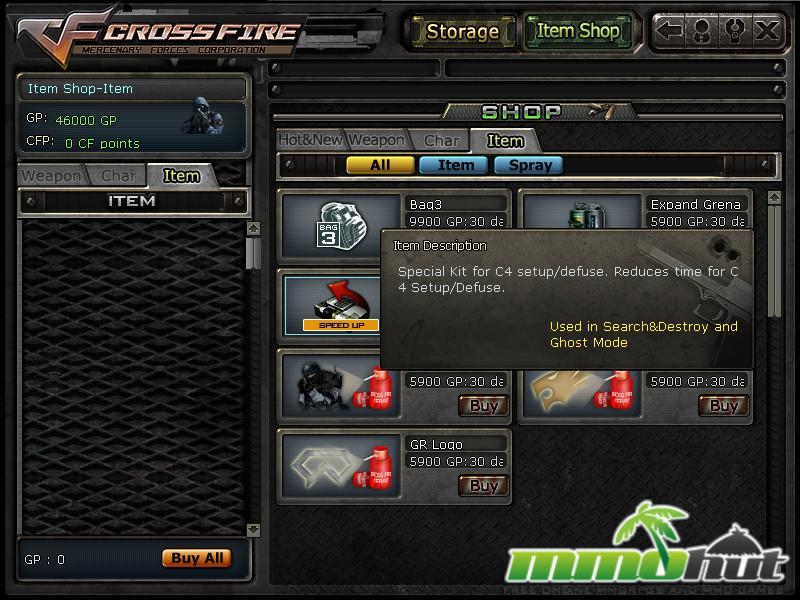 Like many other online shooters, players gain higher ranks as they play. The experience rate is pretty fast, my first rank up occurred after playing two games. Certain guns do have rank requirements but its mostly a status symbol more than anything else. Players can add others to their friend list and see when they’re online along with what game room they are currently in. A quick join feature automatically places you in an available room but I rarely use it, it only takes glance to find a room hosting the map you’re interested in playing. Clans allow players to form groups and battle as more organized teams. Currently, Cross Fire doesn’t have anything like the clan feature in War Rock but perhaps it will come in time, the game is still in beta after all. I did experience one bug that will hopefully be cleared up soon, my music and sound didn’t work properly. I run windows vista 64 bit so I’m used to the occasional glitch of this nature. As usual nProtect, the anti cheat problem employed by Cross Fire, conflicted with my antivirus (AVG Free) and had to be added to my exception list. Other than that, the game ran smoothly. Cross Fire’s main strength is the ease with which a new player can start playing. A short download, quick install, no character creation or tutorial — just jump right in and start shooting.

Cross Fire is a new game that feels old. The graphics won’t impress anyone and the gameplay is something you’ve seen dozens of times before. But the game is fast paced, small, and doesn’t require a hefty graphics card to operate. If you’re a fan of old team based shooters, Cross Fire is worth a try.