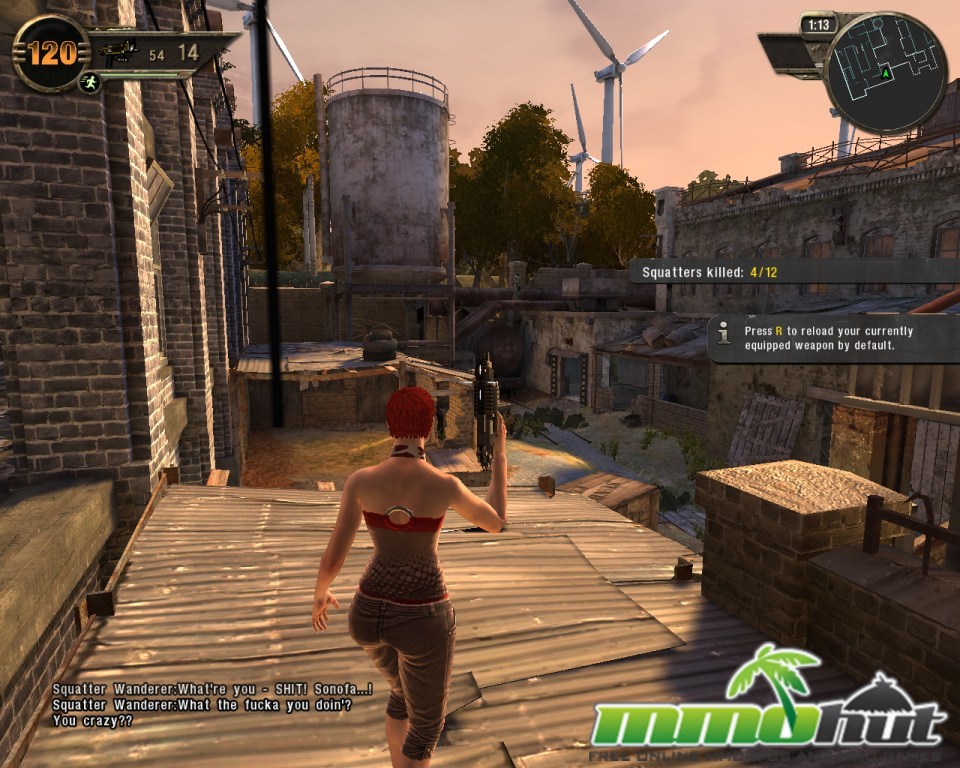 Since the time of this review CrimeCraft has steadily released new content including its bleedout expansion. Listed below are some of these updates.

Character Customization – New character customizable options have been added along with refinements to player professions and skills.

New Maps – New PvP maps have been added allowing you to take the fight into multiple new areas including a heavily guarded financial fortress!

In the history of the MMO shooter, there are two that have had some of the rockiest starts to date: APB and CrimeCraft. While APB died in a blaze of glory before being taken into the hands of GamersFirst months later, CrimeCraft has stayed alive, working through its problems to improve the game and draw players in. Two years and a special expansion later, CrimeCraft has come out of darker times to offer a truly renewed experience from our first review.

Shortly after its release as a pay-to-play MMOTPS, CrimeCraft switched to a freemium model with two optional subscription tiers. This initial “free-to-play” model was extremely limited and biased toward premium subscriptions: free player’s experience was a small fraction of premium experience, and they were denied banking, crafting, mail, gang creation, and PvP rankings, as well as given limited access to chat and character slots. 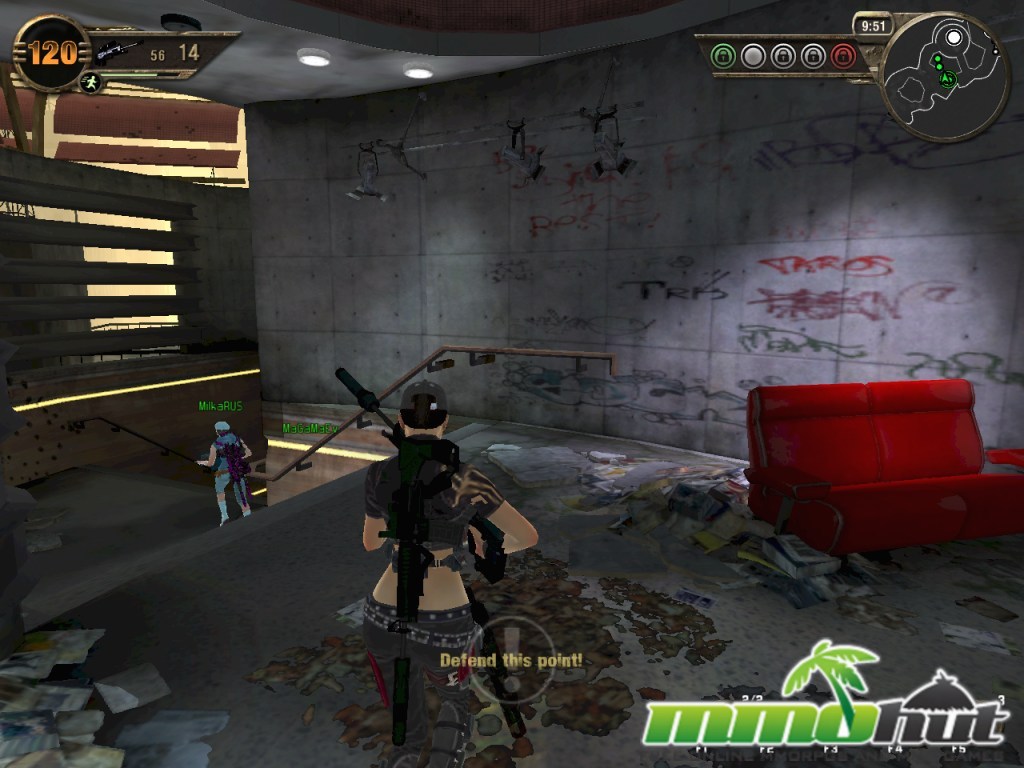 Those days are gone, however. While the game retains a freemium model – free-to-play with optional game subscriptions – the free player experience has been expanded to include almost all game features. All players have the same access to character slots and game features like crafting, banking, and mail, as well as game rankings and tournaments. While premium members do get boosted experience, loot, and gold (as well as access to the Bleedout expansion included in their membership) the gap has been significantly reduced, making a premium membership feel more like a set of perks, rather than free play a set of punishments.

Character creation in CrimeCraft allows a fairly standard range of choices: face, hair, clothing options, and hair and skin color are available to be fine tuned or simply randomized. Once you’ve created a character, you’ll be tossed in to your first live match against other players. This initial “trial by fire” mission pits newbies against other ranked and experienced players in PvP, giving you a few weapons, grenades, and a camo system to battle with. As you go along, tips will flash on the screen, directing you on basic fighting and game play. When the match is over, congratulations: you’ve just been initiated into CrimeCraft.

You’ll be ported afterward to a special Orientation Center. This is a special prologue area where you’ll earn your first levels and be introduced to the game. Unfortunately, this process is a long one; you’ll be stuck for an hour or two going through missions that will introduce you, through PvE combat, how to handle mission objectives, use your weapons and skills, buy and upgrade weapons, craft, and more. Some of these missions are no push-over, and while the game allows others to join you in these PvE missions, you may find yourself often alone against a boss that requires multiple runs from the respawn point to destroy. The entire experience is a little too much, and at times had me frustrated enough to want to quit then and there. Thankfully, for all the pain the prologue area is, there’s something to look forward to in the real Sunrise City.

While CrimeCraft remains primarily a skill-based shooter, it offers a few RPG elements, including the ability to level up and train your character in specific skills. Level itself plays a small part in your overall ranking, and determines primarily what equipment you can use; it also marks a few milestones where you can gain a new boost slot and skill slot. Leveling up also gives you skill points, which you can spend in a variety of skills that are useable in combat. Most skills available are active, and include various types of grenades, special weapon ammo like incendiary rounds, camouflage systems, and even turrets; others are passive and include regenerative boosts, stat boosts, or boosts to guns or skills previously unlocked. Keep in mind, however, that skill points are sparse (unless you hit the cash shop), so think carefully about what skills you think would best accent your playstyle. 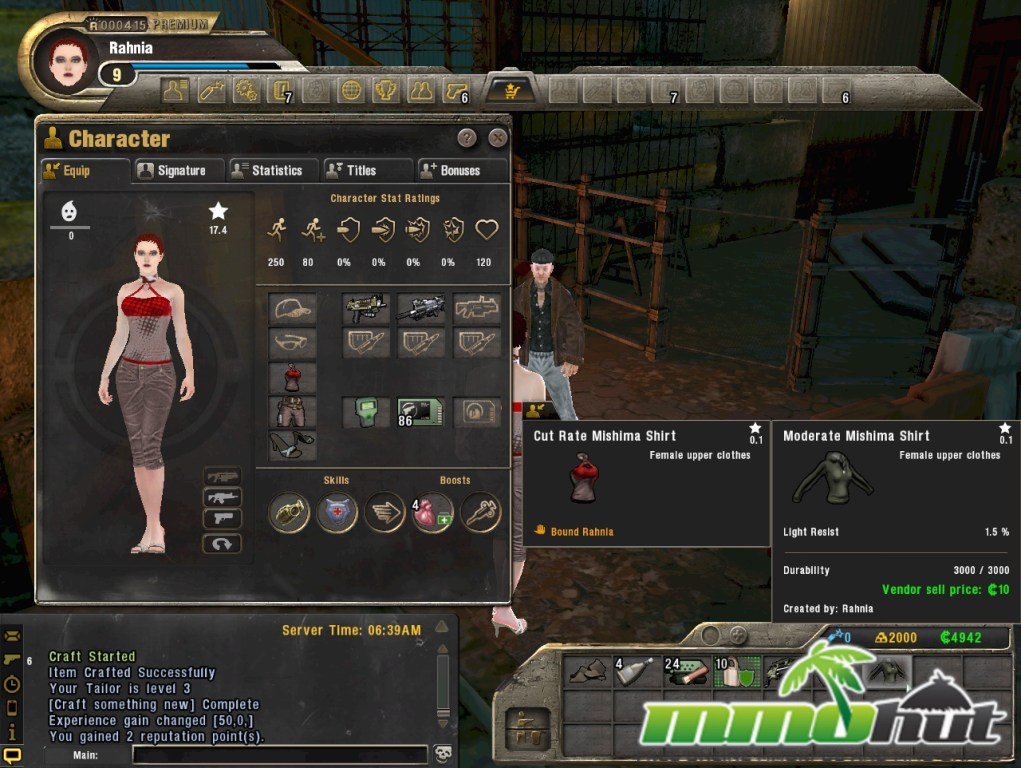 I’ve Got a Mission For You

CrimeCraft is driven by missions available from NPCs that, while telling a backstory, also challenge players to meet objectives in specific maps and modes. Completing missions reward experience, money, reputation, and sometimes gear, as well as the final skill and boost slots when they become available to your character. Unlike most FPSs, the game features both PvE and PvP missions, although most missions are PvP-oriented.

In order to complete a mission, you must enter the map and mode specified by the mission itself, and then complete the objective (usually involving a certain number of kills, or reaching a location on the map and waiting to complete it). Doing so uses the game’s built-in lobby system, and lets you quickly join a game already in progress, or start your own.

Unfortunately, because many missions are PvP, and because many PvP maps require a certain amount of players, you may be waiting in queue for a long time before your mission actually begins for others who need a mission on the same map/game mode to join you. At times, this wait went well beyond just a few minutes; one queue we waited in passed beyond a half hour before the others waiting with us gave up looking for more and moved on. It seemed most beneficial to grab all available missions, and simply watch the lobby for what was needed, rather than create whatever mission was first on our list. Either way, there were often long wait times with little to do in the game’s persistent world. 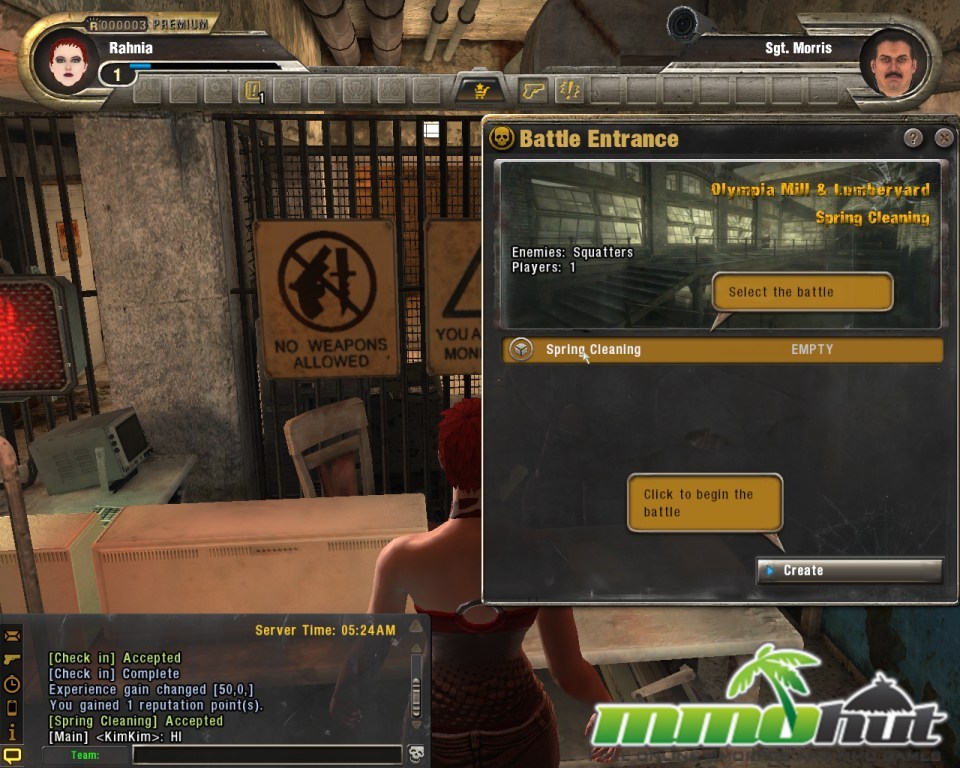 Because of its focus on player skill, CrimeCraft has put several checks in place to make sure that player equipment and skills do not unbalance the gaming experience. This balance is primarily checked through the ranking (star) system, which compiles a number based on the player’s total equipment, level, reputation (earned through completing missions), and kill to death ratio (KDR). This allows the system to flex around individual player skill and equipment, and offers a fair equalizer that is used to determine a mission’s difficulty. Additionally, while players can theoretically learn as many skills as they want through leveling, time, and skill point purchases in the item shop, only three skills at most can be equipped at any time.

Players who choose to face a higher difficulty mission, which is marked on the game’s mission lobby, are able to see that the mission is marked with a high difficulty, and must prepare accordingly to face off against possibly better opponents. Higher ranked players, however, will be faced with a severe penalty in entering low-difficulty missions: their damage, health, and resistances will all be knocked down by 15%, and all of their abilities will be set to level one. While high level players may have an advantage over lower ones in certain areas – an extra skill and boost, or skills not yet accessible to the lower level player – the penalties that are placed keep them in check enough that they can’t simply dominate everyone. Skill, not gear or level, generally win the day in any battle.

CrimeCraft’s equipment system is fairly extensive and allows great customization, as well as allows for player crafting and a player economy. Players have four armor equipment slots, three weapon slots (each designated for light, medium, and heavy weapons), ammo slots, boosts, and available modifications on the gear itself. Everything can be crafted, or purchased from vendors, and various enhancements are designed to let players determine what protection and benefits they want from their gear to fit their playstyle. 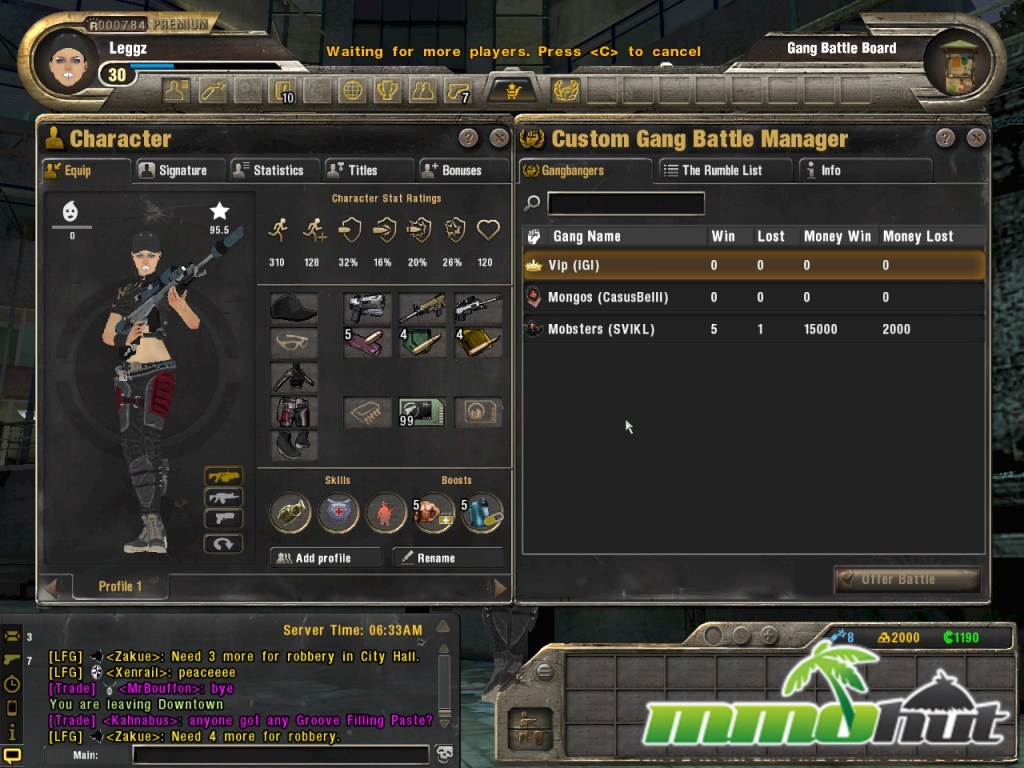 Crafting lets players pick one of four professions: tailoring, engineering, chemistry, and gunsmithing. Materials are available both through the Stockpile PvE mission, and through using a scavenger tool to gather loot automatically as you play through any mission. While not all of the gear you make you may find useful, you can always sell it back to vendors, or post it on the auction house in hopes of selling to other players. You can only learn one profession, but you can change this, and if you hit the cash shop, you can learn a second profession.

There’s still plenty of room for improvement in CrimeCraft. The game’s controls are a little off from a traditional FPS, meaning that for a while, you may struggle with awkward controls, like reaching up to hit F1 to throw a grenade, or having Aim mode act as a toggle rather than being used while the right mouse button is held. Thankfully, these controls can be customized and even left at default, do become comfortable after some time. The tutorial seems too extensive, and drags on longer than necessary. The worst downside, however, is that despite a fun, fast-paced, customizable gameplay, the player population is often too low to support its mission-based style.

There’s no doubt that CrimeCraft has significantly improved since our first review when the game went free-to-play. The free play experience is almost unlimited, and the cash shop seems relatively balanced in the game to only enhance gaming quality for the individual – enough so that a player pumping money into it is barely distinguishable from one who hasn’t spent a dime. The game is beautiful, runs generally well, and has enough variety in missions, game modes, and equipment that playing is truly rewarding. Despite its flaws, CrimeCraft still stands out above the rest of the free-to-play shooter competition as one of the best.