Couple Falls in Love, Gets Married in Entropia Universe and Real Life

When Karen Oderkirk and Jetze Koole first met it was 2011 and it was online. They met in another MMO and soon formed a hunting team on Arkadia in Entropia Universe. Jetze is known as “Geronimo Roni Last” and Karen’s avatar is “Wicked Saradu Hawklord”. Not long afterwards they bought a two-person spaceship, and using their interceptor they toured the other planets eventually settling on Planet Cyrene. During their time online together they got to know each other by talking in-game over Skype and developing a large group of mutual friends. In 2012 they got married online in a ceremony officiated by a friendly starship captain.

Real life took a little more time to get to the same stage as they were living in different countries. Jetze lives in the Netherlands and Karen lived in the USA in California. Karen decided to make the big move to be closer to Jetze and started on the long process of paperwork needed to get a permit to stay in the country. In August of 2013 Karen finally got her permit, and a request for marriage approval was submitted to the town hall. While it took a long time, the two are now a recently-married happy couple and continue to both play in Entropia Universe and in real life. 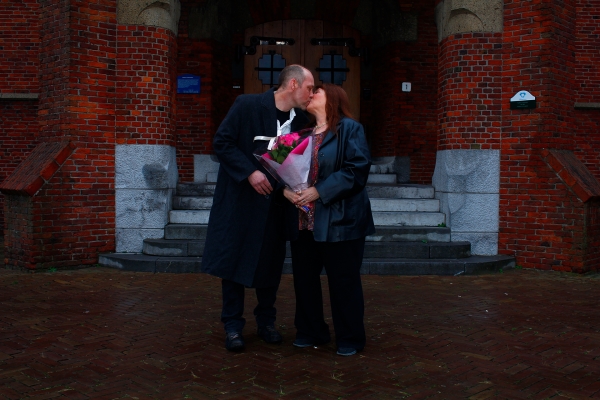