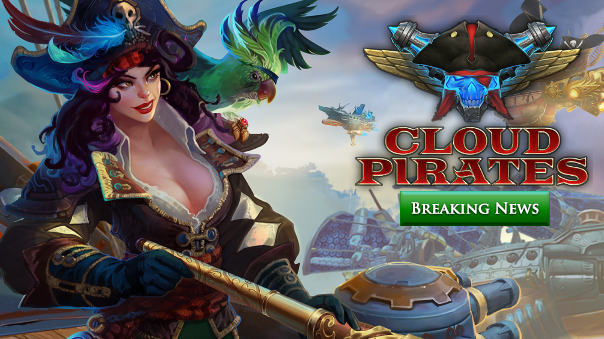 At the end of August, My.com (and the Allods Team) announced their newest title: Cloud Pirates. Based in the Allods Online universe, this title promises airship battles in pursuit of profit and glory. Thankfully for players looking for that airship battle fix, no knowledge of Cloud Pirates’ sibling MMO is necessary as it functions as a full standalone arena experience. This weekend, we had the chance to test out the game in the Friends & Family Test.

Cloud Pirates is an action MMO slash PvP arena game, with a similar game style to Dreadnought, Fractured Space, and to a lesser extent, Guns of Icarus. Rather than have an individual character, players pilot one of their choice of airships into instanced team-based skirmishes with other players. Based on the conditions of the skirmish, the winning team is declared, experience and coin are awarded, and players are free to repeat the process.

Testers were given three ships to start, though I imagine new players will eventually only start with one: the Training ship. This ship has an auto-target ability in place to make aiming easier as players adjust to the game mechanics, and functions as an all-around combat ready vehicle. There are, however, several different classes of ships. Cruisers, for example, take less damage the faster they travel; battleships offer heavy protection and powerful strikes at the cost of their own speed; support (“healing”) ships can repair and rejuvenate their allies; and other assault ships specialize in mobility and quick strike mechanics.

Obtaining new ships is done through research. Like modern warfare games, such as World of Tanks, airships in Cloud Pirates are split into tiers and research trees. Players must first research early tier ships to get access to these better ships. Research is funded primarily by Ship Experience, represented by a steel skull, which can only be earned by taking that ship into battle. Additional Experience, earned by the player as a “surplus,” can also be used to research. Once researched, upgrades can be purchased with coin.

A quick look at research trees.

Each ship has multiple parts to research upgrades or sidegrades for. These include variants on weapons, improved armor and shields, and mobility enhancers. They also included tactical skills which can be activated via hotkeys during battle. Only one type of each upgrade can be equipped at once, and equipping these costs some coin. While it may be straightforward on some parts, choosing a tactical skill may take a little more planning. Still, income seemed generous enough to not make this an issue.

So once all that is settled, and a ship is chosen, all it takes is hitting “Battle!” to head into battle. The gameplay user interface is relatively clean and minimalistic, with most crucial info being tucked into the bottom left and right of the screen where it’s the least obtrusive. A map in the lower right shows the location of your team mates, your objectives, and (if close enough), your enemies. The lower left shows your shields, speed, altitude, and skills.

There’s a lot going on in a team battle.

Controls are also simplistic, with (as default) WASD controlling forward, back, and turns, and shift and space controlling altitude. Left and right mouse buttons are used to fire weapons. Keys can also be reassigned. Currently, controller support doesn’t appear to be an option. Hopefully this will be implemented in a later build. Without it, controls felt a little stiff for moving in three planes, especially in battle where you may be constantly leaning on two or three keys to turn, bank, and change altitude.

The central HUD displays your three cannon’s heat meters – front and broadsides. Aiming a cannon is dependent on where your camera is pointed in relation to your ship; thus you must “look over” the sides of your ships to fire your broadside cannons, and look toward the helm to fire your front cannons. Each weapon has its own heat meter, and overheating your cannons will cause them to be locked out on cooldown for a fairly long period.

Destroying an enemy is satisfying.

The end result is that in a battle, you must move your ship often to turn your broadsides to the enemy. This is not only to enable using your broadsides on both sides of the ship, but serves importantly to help mitigate damage by turning your shields to maximize your defense. With a 3D battlefield riddled with environmental obstacles and cover, mobility is a constant. Many ships come with a teleporter, which allows your ship to warp ahead a short distance – enough to get out of the heat of battle and wait for your shields to recover.

Engines down? Warp out!

There are also powerups found on the field which can be picked up by flying into them. This includes repairing shields and boosting power for a limited time. These appear to spawn in random areas on the field (also displaying on the minimap), and it can be useful to know where these are and have one in your sights in case you need it.

Repair Boost is a much needed relief.

Overall, Cloud Pirates seems like a promising action MMO. Its controls and gameplay are easy to learn but will take time and practice to master. Movement can feel sluggish, until you get into a team battle and find yourself paying more attention to your shields, engines, and cannons than how fast you’re moving. Researching new ships also seems feasible and not prohibitively grindy to do. Naturally, this comes with a caution: the game is in early testing, and these mechanics may all change. The cash shop was also not implemented, which will be an important factor in the game’s success.

You can look forward to more testing, and sign up for the Cloud Pirates beta, at this link!