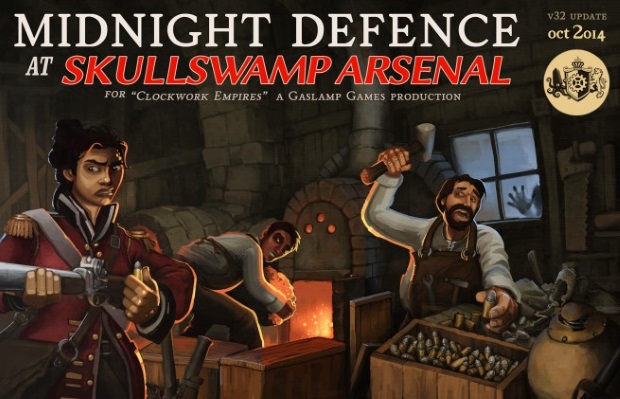 The latest news from the frontiers of the Clockwork Empire is that Progress continues to expand at a rapid rate. A flurry of News of Substantial Significance has emerged from the front lines of the Clockwork Empire, foremost being that Her Majesty’s Army is now employing sturdily made explosives in an effort to continue to secure the border against barbaric enemies, new and ancient. Yes, lads, Landmines! Coupled with the new state-of-the-art Ammunition System, those pesky Ancient Beings Summoned from Beyond don’t stand a chance! Her Majesty’s loyal colonists continue to Impress and Succeed at the forefront of technology in the name of Progress and Industry, huzzah!

Additionally, reports from Our Great Army detail new and impressive combat techniques, though the Minister reminds all loyal Bureaucrats that they should not speak to postulants or members of any MURDER CULT. This will Not Be Tolerated. The Minster also mentioned to be cautious of the armoured Giant Beetles, as they, along with other Giant Beasts, are wild in nature and pose a threat to the good colonists of the Clockwork Empire if disturbed.

Yes, Life on the Frontier grows more challenging each day even as New Solutions and Enhancements are made on the hour, ever-furthering the Development and Progress of the Clockwork Empire.

Each week the Empire makes new advancements, breakthroughs, and Purges that shall assist and enhance our Colonization Efforts, so be sure to follow our Weekly Development Reports. All hail the Clockwork Empire!

A thorough listing of each new Advancement can be explored at www.clockworkempires.com or on the Steam forums once the patch is officially live today: http://store.steampowered.com/app/224740/.