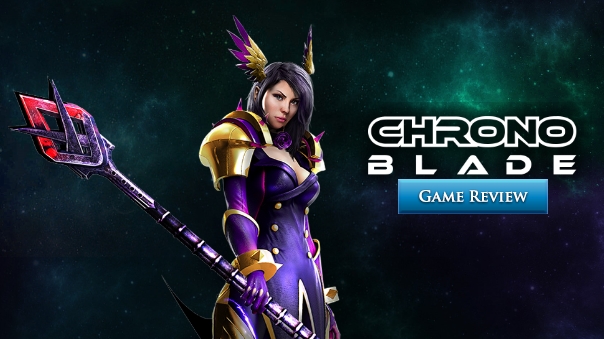 ChronoBlade is the latest free-to-play mobile game for the iOS and Android platforms from nWay, the company who brought us Power Rangers Legacy Wars. The game is supposed to follow the story of warriors from multiverses that are taking on the Chonarch Empire, a technologically enhanced invader who are set to conquer their various worlds. You’ll take control of champions from the various universes as you jump into missions and quests where you’ll be facing the minions of the Chronarch Empire in hopes of thwarting their plans of domination.

ChronoBlade is an energy-based free-to-play side-scrolling brawler that brings in an “explosive” arcade-style combat system. However, the game just plays like the typical side-scrolling brawler where you play with a virtual controller, with attacks and skills streamlined for faster combat inputs and skill activation. Aside from the light and heavy attack buttons, jump and block commands, players have the option to equip three skills from the plethora of unlockable and upgradable skills each hero has. You can then fine-tune the equipped skills to further “customize” the abilities your heroes have in matches and PvE arenas.

You are given four heroes to play with, with each hero offering different playstyles, skills, element damage, and equipment that you can upgrade and unlock as you level them up in-game.

Game progression follows the typical free-to-play mobile game system where you will go through each instance per stage. Each stage has a star-rating where you can get to three stars depending on how fast you finish the missions. Each instance also has a normal and heroic mode where you have to return to farm materials and equipment material for each hero.

There are also timed dungeons that you can get into where accomplishing them can net you better rewards that you can’t normally gather them the PvE maps. 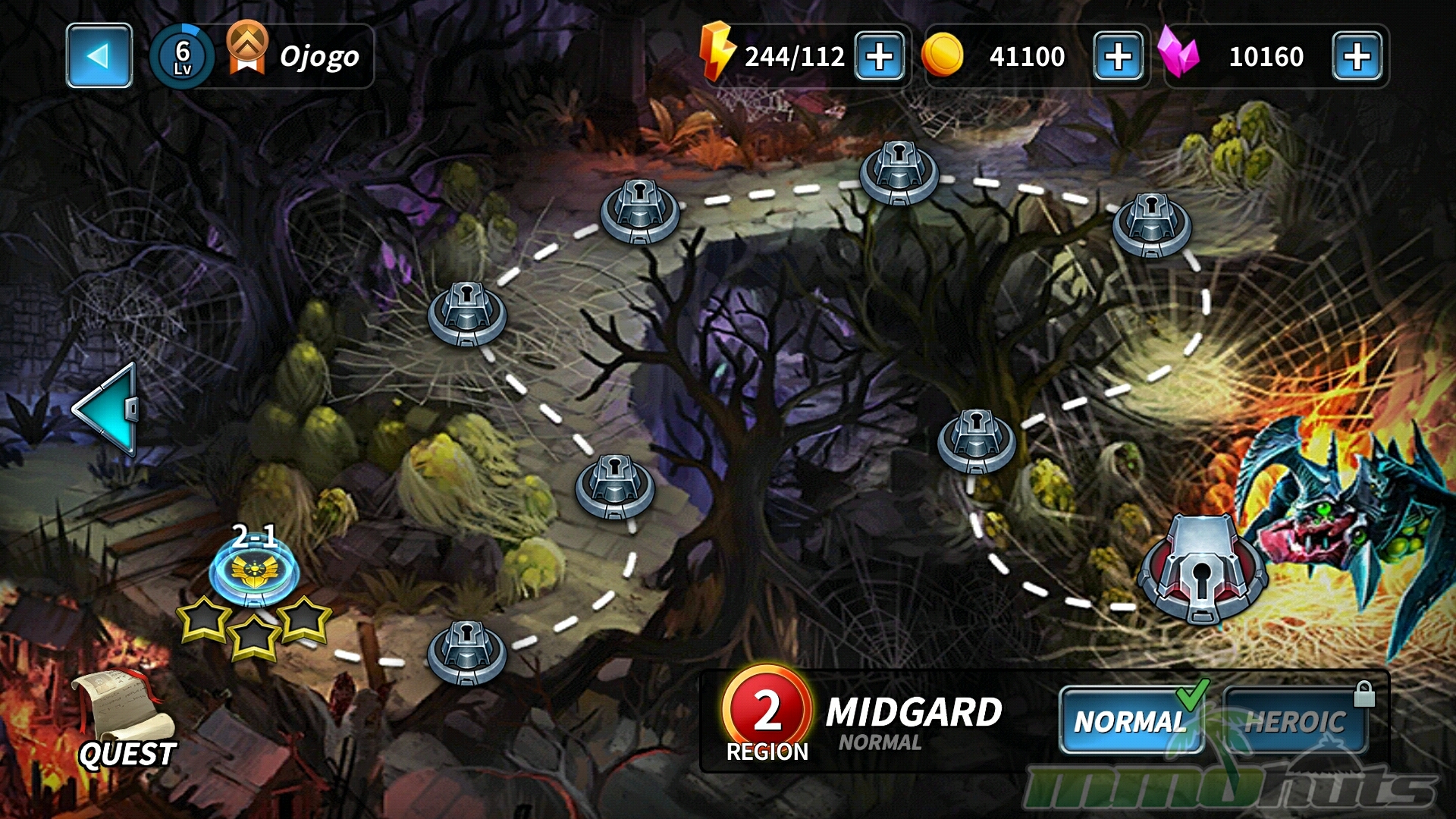 Aside from the PvE system, ChonoBlade players can join in the PvP/arena system where you can face against other players in synchronous battles. There’s even a ranking system in-place so that people will have reasons to participate jump into the ranks.

It seems like nWay will have a guild system in place somewhere down the line. As of this review, it’s still unavailable.

You are given four heroes to play which you can upgrade their equipment or raise their level as you play them in arenas.

Currently you can choose from heroes Lophi, Aurok, Lucas, and Thera. All have basically the same control scheme, but each has their own set of “unique” skills that you can equip and level them up through the use of skill points.

Leveling and unlocking equipment for your heroes will be your primary focus in ChronoBlade since you’re going to have to focus on unlocking stat boosts which come primarily from the equipment. nWay also designed the game to force you to juggle and unlock the equipment since each hero have a predetermined amount of equipment and weapons.

You can also “promote” the equipment by raising its rarity level improving its stats and abilities. 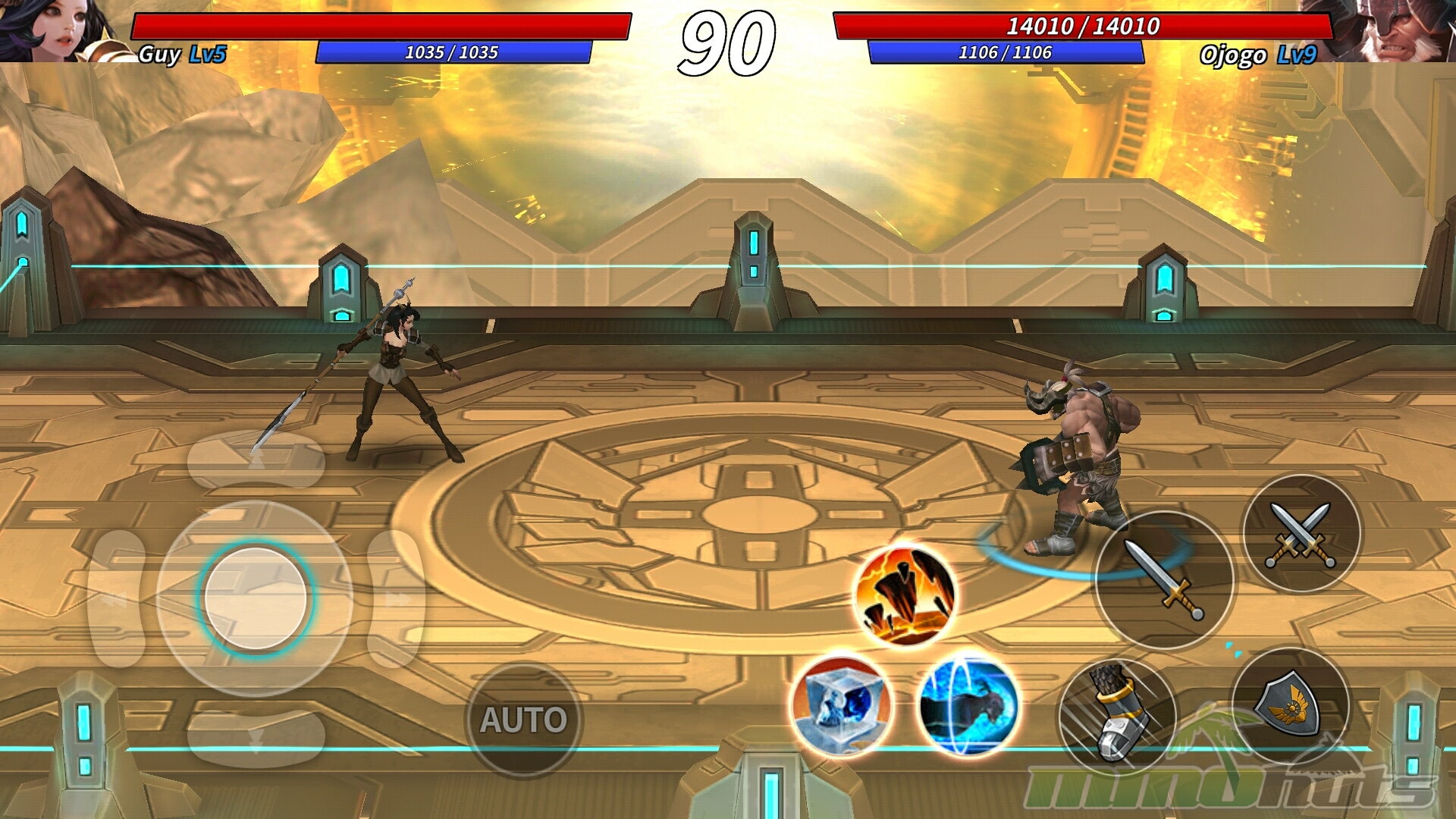 Everything is simplified for mobile control.

One interesting feature that ChronoBlade has when it comes to it’s heroes is that aside from the three switchable abilities, if you hit your combos high enough, you have a fourth ability that you can activate and use. This is really handy since the fourth ability doesn’t require any mana consumption on your part, you just need to combo properly.

Upgrading skills in ChronoBlade requires you to have skill points that you can acquire in regular intervals. You can also purchase the skills by using the in-game premium currency to quickly get the points if you can’t wait for them.

nWay also designed the upgrade system for both equipment and abilities by making the heroes’ current level as the cap for the upgrades. So you basically can’t upgrade past your current hero level.

Conclusion: Good (3.5/5)
Solid but pretty dated game system. The ability switching gameplay is interesting but will only keep you interested for a while. You won’t have any reason to get back into the game.

As you can see, nWay didn’t reinvent the wheel with ChronoBlade. Even the skill/equipment based leveling system isn’t something new since other games have already used and abused it.

However, this doesn’t mean that ChronoBlade is a really boring game to play. What really stood out to me as I played the game is the way you can customize your skills to tailor-make to suit your playstyle. I loved that I had Aurok focus on interrupt skills so that I can have better arena runs, while I am actually forced to switch his abilities to AoE and PvE centric abilities. This is pretty important since this allows a variation in gameplay for people especially for those looking to spice things up when they come back into the game.

Since the game system is typical to that of the usual side scrolling mobile games, replayability is iffy and subjective. If you like retreading dungeons and maps and find the practice interesting, then ChronoBlade has got you covered. However, if you’re looking for a more engaging replayability system, ChronoBlade isn’t something I’d suggest you get into.

If you’re someone who’s already been playing tons of action side-scroller games, there are other, better options right now. The game hasn’t been able to keep my interest even with it’s interesting skill switching gameplay.