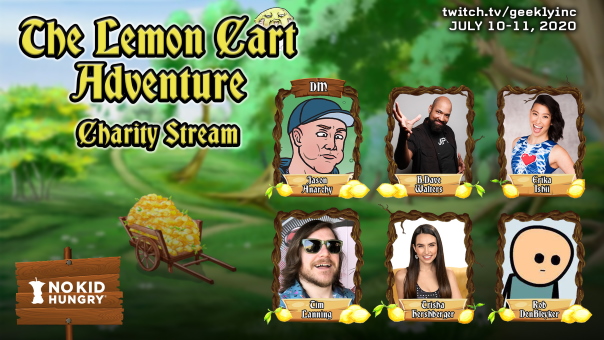 Community leaders from across the gaming landscape are coming together for a live-streamed, chat-driven Dungeons & Dragons adventure in an effort to fundraise for No Kid Hungry.

Four gaming personalities–led by a seasoned game master–will unravel the mysteries of an evil plot steeped in lemons (yes, lemons) in front of a live Twitch audience. Along the way, Twitch viewers can influence and change the direction of the adventure through votes and donations. How will the heroes react to aid from the audience? What if the audience spawns a pillaging pack of bugbears? What if the audience hides the lemons?!

“The passion and energy of the Twitch community has played a huge part in our ability to get meals to children in need,” says Carla Warner, Director of Revenue Innovation for No Kid Hungry. “We’re so blessed to have such great people in gaming coming together for this event, and we hope the interactive format makes viewers feel like they are part of the adventure.”

Those great people include:

“Dungeons & Dragons has so much potential for player and gamemaster creativity. We’re excited to see how much creativity the audience can bring to the adventure as we push for toward our fundraising goal,” Warner says.

Viewers can tune into the event on the GeeklyInc Twitch channel (https://www.twitch.tv/geeklyinc) on July 10 and July 11th from 7pm to 11pm EST. To learn more about No Kid Hungry and its impact on childhood hunger across the U.S., visit the No Kid Hungry website at NoKidHungry.org.