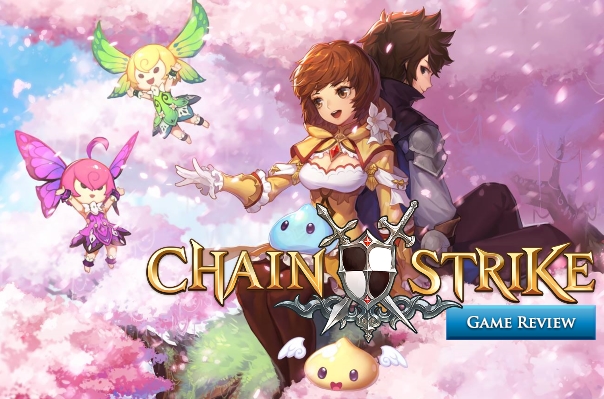 “For all men tragically great are made so through a certain morbidness…. all mortal greatness is but disease.” – Moby-Dick; or, The Whale.

The craze of “gacha” mobile games will never go away, but what price must be paid to have powerful characters? The answer may shock you. Gacha Games are games where your characters are acquired in a random summoning system, akin to the Japanese “Gachapon” Machines. Think Brave Frontier or Dragon Ball: Dokkan Battle. Though it probably should be pronounced “Gotcha” because ultimately, an unfortunate majority of these games only serve to push players towards spending money to be competitive. Chain Strike is the latest mobile RPG from com2US and is a team-based RPG with interesting Chess mechanics to go along with each character. The characters you recruit will have a random Chess-styled movement linked to them (Rook, Queen, Knight, Bishop) or if you’re very lucky (and pull a 5*) you could have one with a combination of movements. These characters can only attack/move in the direction listed.

Chain Strike has an incredibly long tutorial, which is amazing for a game that isn’t exactly complicated to begin with. The only thing players have to get used to is the Chess-combat system. The tutorial drags on for what feels like forever, and it did not take me long to figure out what this game is all about. At the end of the day, a mobile game that is free-to-play has to create revenue for the developers, and they do give you a fair amount of the standard summoning books and a slow trickle of Gems (RL currency) to summon for the 3-5* units. I do appreciate that they show you the percentage chances of each rank unit per style of summoning, but that is what crushed my hopes of getting a decent unit. Let’s break down your odds of having a decent time. Sure, I was very lucky getting a few 4* units, but not everyone is going to have that same RNG blessing. 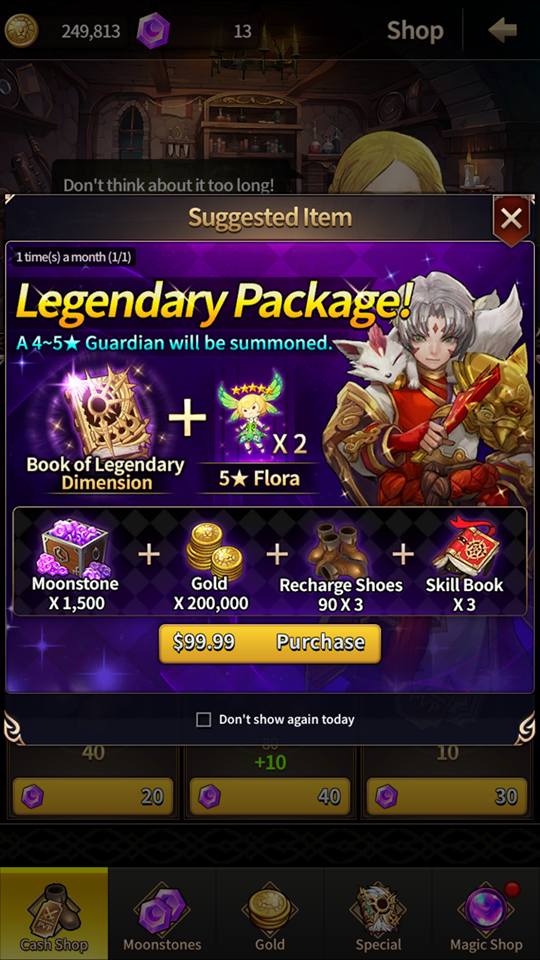 There's a whole lot going on in this image.

Outside of the “Book of Legendary Summoning”, your highest chance of getting a 5* unit is 0.8%. 4 stars are 12% for both Book of Mystical Dimension/Moonstone (Gems). The regular/free summon book has an 86% chance for a 1* unit. Seeing that the Book of Legendary Summoning only gives 4 (95%) or 5* (5%) chance, I went to see how you’d get them. Right now I only see them in one spot, and that’s a 99 dollar bundle. The Legendary Package is 1x Book of Legendary Summoning, 1500 Moonstones, 200,000 Gold, 90x 3 Recharge Shoes (Stamina System), 3x Skill Books, and 2x 5* Fiora character. There’s a weaker version for 49 dollars, without the Legendary Summoning. But with only a 5% chance to get a 5*, that still hardly sounds worth it. 100 bucks for two 5* units, and a “chance” of another one? Of course, you can spend money on the Mystical Summoning Books, which give 3-5* units, but the cheapest bundle of those is 10 bucks, then jumps right to nearly 50.

The combat is really where Chain Strike shines. Two forces stand on a 5×7 grid, and before the fight starts, you set the units you to in designated spots, or you can auto-place them, which has pretty reasonable smart placements. That’s also where you designate your “Leader” unit (4* or higher only), which confers a variety of buffs, depending on the unit put there. You get three “points” which are shown with blue crystals on the UI. Movement uses 1 of those, and if you move, you can no longer attack. Most of the attacks are 2 crystals, but the buff abilities are either 1 or 0. Characters can only attack units that are in their movement range, and when you select an ability, anyone on your side who has an attack range that is also in range can join in for team-attacks. This is the major brunt of your damage, since you only have but so much in the way of points per turn. This can become incredibly frustrating when enemies begin moving around and suddenly are out of range, requiring you to move yet again.

It features an Auto-Battle that is mostly smart. I would never use Auto-Battle on Bosses though, because of the “Rage” feature. The AI will default to killing the smaller enemies first, which in most games would be wise. When either side (player or enemy) is down to one unit, they enter a “Rage” state. That unit will become much stronger, and Boss units will start hitting more often, for more damage, and are generally horrifying. If you kill a boss, the stage is over and you win, and you don’t get the exp from killing the other units, but I’d much rather not have a Rage-filled boss. Sounds like a terrible idea. This battle system is one I truly love, figuring out the right attack with the right damage/status ailment/benefit to lead off with for each situation.

Chain Strike also includes PVP, where you use a Battle Ticket to play against a players default team. You can see their power rating, PVP ranking, levels, et cetera before you pick, but I noticed even in Bronze that there was a pretty huge disparity. You’ll see who is lucky/who is a whale and who is not. In this same menu, there are also “rivals”, which are NPC groups that you can do battle with again after beating them in the story. This was a neat feature, and if you have a team that is strong and you’re confident with, you can have a lot of fun in PVP. It comes right back to having an incredibly powerful team though; if you don’t have it, you will want to probably stick to PVE. 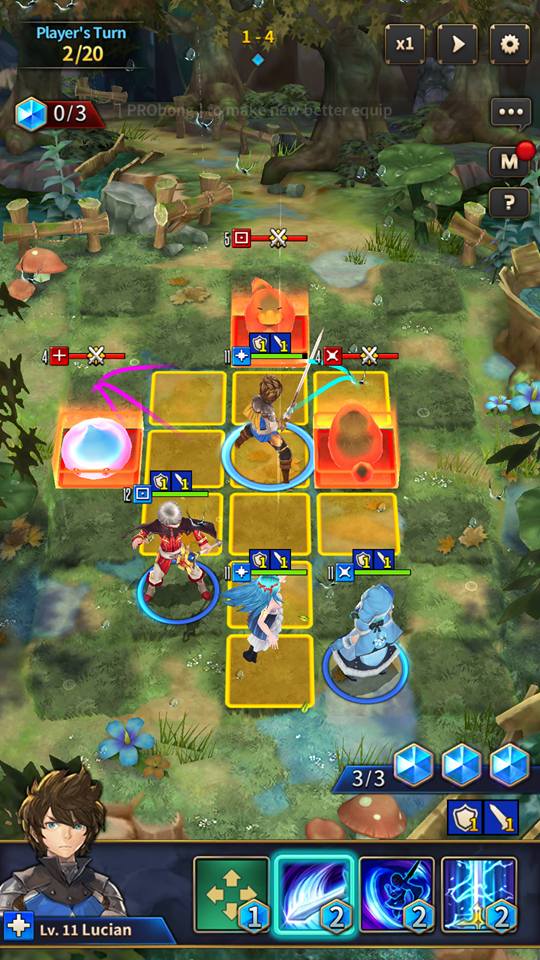 It's easy to tell what's in range, what team attacks will occur and how far you can move.

The visuals are very polished and smooth, and the characters, regardless of their rarity, range from adorable to badass. I enjoy the music although, like most mobile games, I muted the music soon after starting to play – not because it’s bad, but I simply prefer to enjoy my quiet time. The game plays without any measure of lag, even on my Galaxy Note 4, and offers a fun way to tackle team-based tactics RPGs. Having a wide variety of units is important because situations will require healers sometimes, whereas others you might want a ton of damage and well-equipped/ high-level units. Learning the chess system and having a glut of units helps, but ultimately, that means you have to play “all the time” or drop some cash. The major takeaway seems to be “grind or spend money”. Those Mystical Bundles also come with some EXP Potions, which also come in minor amounts throughout your adventure, as you complete challenges/log-in daily. There is such a gigantic amount of grinding to be had in this game if you aren’t spending money to get those bundles that include EXP Potions, or trying to start off with 5* units.

Of course, you can evolve units, so if you have a 3*, you can make it a 4 or 5 with some time. They require Evolution Stones (acquired from the Unknown Land dungeon) and stones for whatever role they play (Rook, Bishop, King, Knight, Queen) which are in the same dungeon area. Personally, I don’t think it’s worth bothering with the 3* units and maybe focus on one of the 4* units you enjoy to make a powerful leader unit. At least the challenges for each area in the Unknown Land will give you a large chunk of the stones you need, but that’s only great for the first units you will transform. I recommend collecting those stones, but don’t waste them. You might wind up with a 5* unit one day that will need these after all. Leveling units, equipping them, all of this takes time. To their credit, I’ve never come close to running out of Stamina for my grind and was able to get most of my units to their level cap (which is also dependent on rarity). You’re going to want to summon as much as possible though because you can also feed units to your stronger units to give them +1 to +5 power boosts. The higher the units rarity will give more towards this and it seems to also help if they are in the same style of unit. 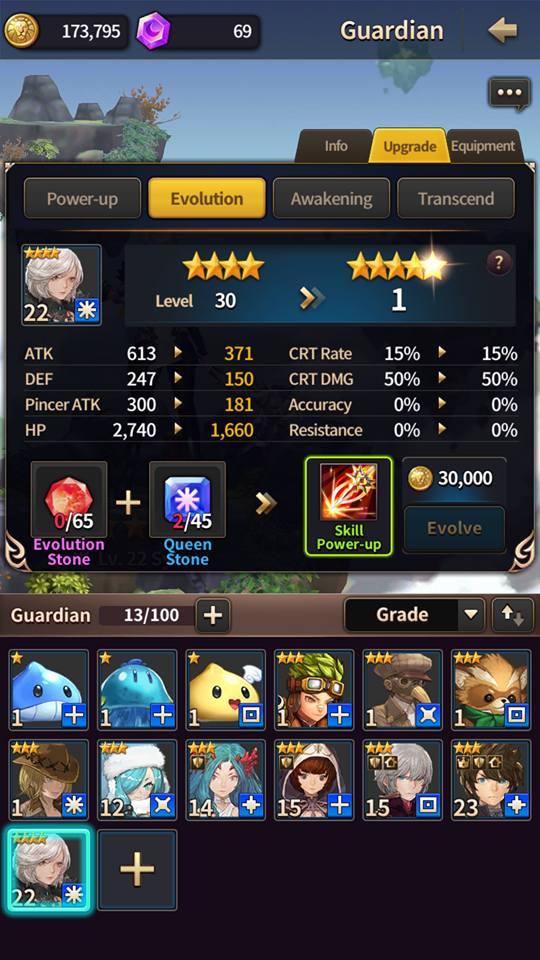 The grind is all too real in this mobile title.

Chain Strike’s gameplay really makes this stand out, but what drags it down is, frankly, the rest of the game. It does offer tons of gold and other things through Challenges and Quests (completing certain requirements in-game), and the log-in bonuses are decent, but it is entirely too difficult to get “good” units, and then to increase their power to 6*. I enjoyed playing with my 3* and 4* units, and the story, while mediocre, was not what pulled me in. The combat requires thought and strategy, even if you have powerful characters. Those characters do you no good if you don’t know how to position them for successful team attacks. I love that the game has tons of game modes to explore and grind your way through, it has a huge roster of wild fantasy characters and honestly looks very pretty. The emphasis on spending money is stronger, though, than most Gacha-style games I’ve played over my years here. I don’t mind spending money if it seems fair and I enjoy the game, and while yes, I enjoy this game, the odds do not seem like they are in my (or anyone’s) favor. Chain Strike is a trifle pushy, and the titanic paywall comes early. I wanted to love this game, I really did. Chain Strike started off hitting me hard with stuff I loved, but that love quickly faded.