Still in early development, Card Monsters is aiming to draw in testers now to help shape the game and make it as excellent as possible before release.

We gave Card Monsters a quick test ourselves, and were pretty impressed with what we saw!

While the term “TCG” has become extremely popular, only two real formats seem to persist – the classic Magic: The Gathering style, and the more modern Hearthstone style. Card Monsters, however, follows neither of these formats.

Decks are built through two types of cards: monsters and equipment. Each card has a color, and monsters can only equip items that match their card color. Monsters come in three varieties: melee (sword), archer (bow), and mage (staff). While monsters can equip any piece of equipment that matches their color, using the right equipment for their attack style is key.

The playing field can only hold three monsters on each side, and their positioning is crucial. Melee attackers can only go in the front center spot, and attack the unit directly across from them first. Hunters and mages can go in the rear left and right spots, but attack diagonally, with hunters having a greater range and attacking the furthermost card first, while mages have a shorter range but attack the closest enemy card first. 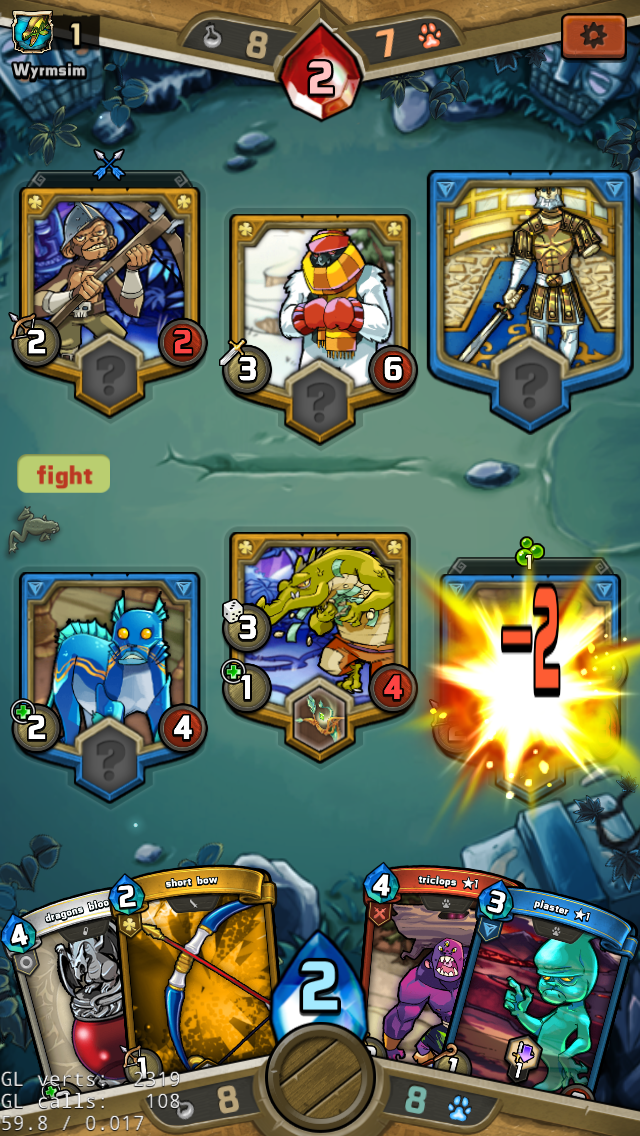 The playing field is compact and to the point.

If a monster is lost, the other monsters on the field shift to occupy their slot based on a center, left, right priority. This means that if the melee card is lost, a ranged attacker will move into the melee position, making them vulnerable and unable to attack. Players will have to quickly place a new melee card in the center to save their ranged monsters from such a fate.

Unlike many card games where the hero’s health is the key win-or-lose factor, in Card Monsters, it’s all about the monsters in your deck. Currently each deck is set to contain eight monsters. If all eight of these monsters are defeated, it’s game over.

The beta test currently only contains real-time battles between players, but matches feel rather fast paced. The graphics are also vivid and colorful, and have a distinct style. The board also wastes no space, making it ideal for phone players.

If you’re looking for a new card game to try, or want to help be a key part of the development process, give Card Monsters a try! Mu77 is eagerly awaiting feedback.