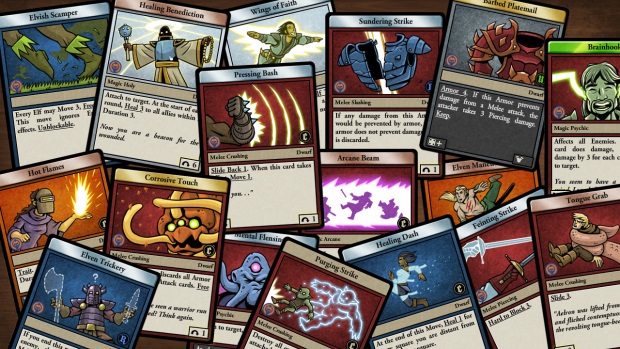 Card Hunter’s first expansion, Attack of the Artifacts, is now available for play at http://cardhunter.com. Included are over 70 new cards, 200 new items and six new adventures as well as a brand new multiplayer league system.

Explore the mysterious Valley of Tezkal and collect powerful new cards and artifacts from the distant past. Challenge Sharkbears, Umber Bulks and other monsters of legend in fiendishly difficult new adventures.

In the brand new league system, play as monsters wielding devastating monster cards or use your multiplayer party to challenge others on radically new boards to win prizes including pizza, treasure chests and unique figures.

Every day during our launch week, simply log in to Card Hunter to receive a free magnificent artifact chest and try out the league system for free in Artifact Anarchy or Clash of the Geomancers.

Attack of the Artifacts is Card Hunter’s first expansion set, bringing new depths to the game that was nominated for Best Debut at the Game Developers Choice Awards and accoladed as the most original game of 2014 by PC Gamer.

Expansion details and launch specials can be found here.