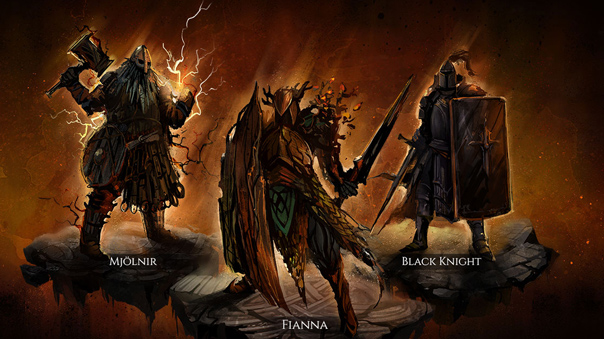 Following this week’s stretch goal funding of stealth, CityState Games has revealed its third of 10 class archetypes for upcoming PvP RvR MMORPG, Camelot Unchained. This week group A was voted on by backers, revealing the Heavy Fighters across the three realms.

Of the three heavy fighters, the Fianna are generally the squishier of the group. At least by the numbers and in terms of their promoted armor types. However a skillful Fianna can cheat death repeatedly with powerful built in regeneration abilities, combined with powerful shouts to maintain and maximize the strength of their allies on the battlefield. Their spear grants them long melee range for a tank class, with a faster attack speed than you’d expect. With fast strikes and devastating counterstrikes, expect your enemies to cry “Kill it with fire,” as their frustration builds from your powerful impact on group fights.

Juggernauts in the true sense of the word, Black Knights slam into their foes at high speeds, dealing crushing damage that ignores some bonuses from armor while making foes more vulnerable to continued crushing damage. Juggernauts can maintain bonuses from badly damaged armor in long battles to sustain immense amounts of damage without showing weakness. They can temporarily ignore wounds to fight at full strength for a limited duration, and can unleash their true power when closest to death. Their motto “Fear Us” is wise advise for those forced to face a Black Knight in close combat.

Mjolnir utilize hammers embedded with elements of the two shattered moons. This imbues these hammers with control over the element of lightning, making them living embodiments of the storm. The Mjolnir are capable of crushing foes caught in close combat, with a combination of crushing damage and a building rage that heightens their attack damage for hitting the same target multiple times. However against ranged foes, the Mjolnir can utilize hammer throws and lightning blasts to disrupt enemy spells, or boost their speed to close in on these targets. Wielding the power of lightning is dangerous for someone in heavy metallic armor however, so Mjolnir may need to lighten their load to increase their ranged utility safely.

Today Camelot Unchained also revealed a new stretch goal to hire two more advanced programmers to the team! Learn more about this new stretch goal or the new classes on the official website.