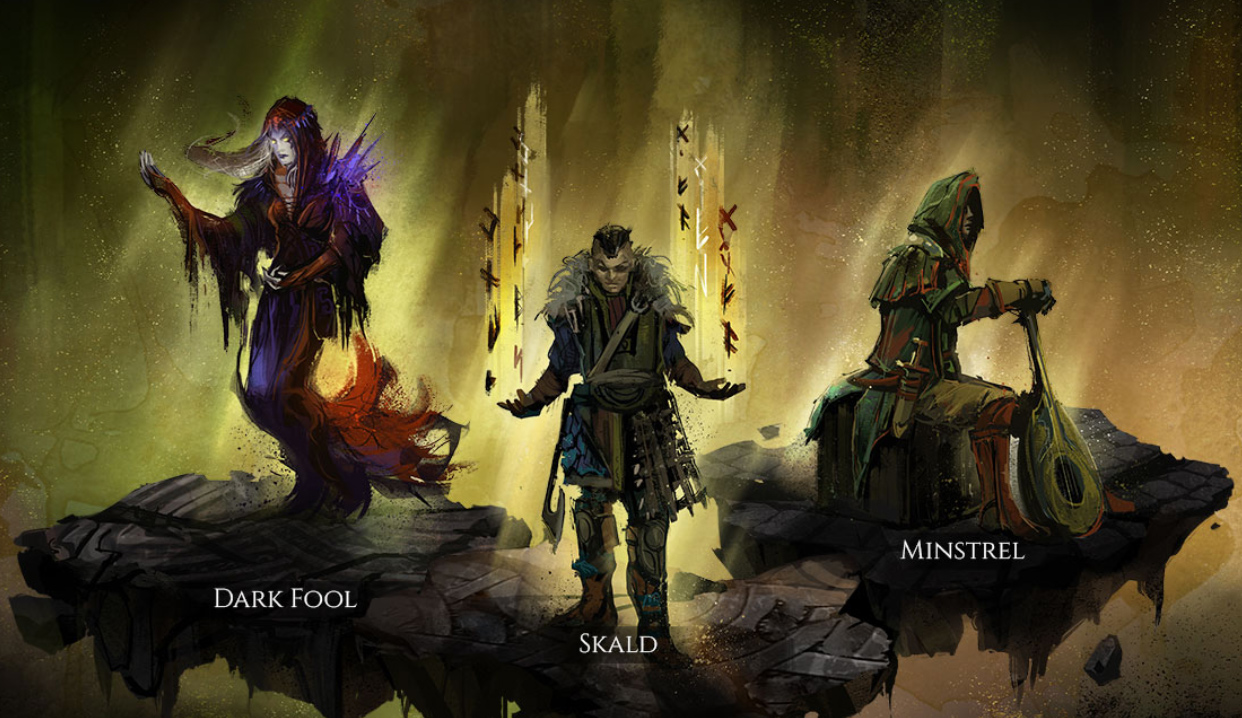 Camelot Unchained has just concluded their livestream reveal of the Support Archetype, taking on the form most commonly identified in MMORPGs as bards. As I was out the previous week, I’ll also be recapping last Friday’s mage archetype below to clue those in that missed out! Let’s jump right into the break down!

The support class seems focused on bringing wide arching buffs or enemy debuffs across a battlefield. While primarily sold as a speed buff machine, this limited description seems to hide the far more sinister and arching power the support class brings, with the more allies/enemies present only amplifying their utility on the battlefield. Everything from illusions and fear to game changing power-ups are at the command of the bard.

Skalds stand as unique among the supports as a result of their song focus being primarily vocal. This is both a blessing as well as a curse as this means silencing attacks can entirely shut them down, but also that they are more offensive oriented since their hands (and resources) are free to focus on a weapon of choice rather than musical instrument.

The Skald’s sample songs focus on buffs to damage and divine interventions. They’re capable of preventing wound inflictions on allies, and can debuff enemies over time to cause greater and greater damage from Viking attacks. Their particular brand of speed buff can be broken if damage is inflicted, but offers a hefty attack bonus if a Viking under its effect can land the first blow on an enemy. Focusing on their offensive nature, Legacy Strike offers a boon for Skalds that can penetrate through an enemy’s armor, buffing up their next song to new heights!

Skalds also offer a twisting nature to their songs, allowing them to stack effects from a recently sung song with the currently sung song. Over use of this effect will be limited by the high initial cost of starting a song, as well as the constant channel maintenance to remain singing.

Minstrels love nothing better than an audience, and come out of the gates swinging harder than their less musically talented counterparts. The more enemies present to hear their tune, the harsher the impact on the foolish zergs that oppose them. Multiple minstrels uniting their talents to a single song have a multiplicative effect that will grant allies massive boons. Alas a song can only hold the interest of its audience for so long before fading from memory. So a talented Minstrel will need to plan out a full performance with a variety of songs to maintain effectiveness over a long battle.

The Minstrel offers the faster speed buff of the supports, at a cost. Should you take surprise fire while playing their song, those hit will be unable to gain the benefit of song for a short period. Perhaps the most unique part of the Minstrel is their power to play harder for more immediate and more powerful effects, though the songs lose potency faster over time.

Of course the TDD continue their ways of trickery and deceit even among their supporters. While still technically performers, the Dark Fool gets their kicks more from the terror in their enemies than the smiles of friends. They utilize shouts (instant effects rather than channeled over time) more so than their counterparts, and lean much heavier towards negative debuffs as a whole. These jesters of the battlefield create illusions and lead their foes into traps for jollies, but more enjoy tormenting their foes than killing them. Their true might is felt when their side is losing, while Dark Fools lose effectiveness as their side pushes towards victory.

Their signature song is a blood draining tune that targets enemies with more remaining blood than allies, and transfers it to themselves and their hurting friends. Their speed buff also carries a great risk, with great reward. Damage taken while under Mischievous Haste is raised, but should the song conclude, all allies gain a mind buff that lessens the blood and stamina cost greatly of their next attack to get off a truly powerful strike at low cost. Overall their shouts drain the buffs from foes, leaving them panicked and weak in the knees.

Learn more about the Supports on the Camelot Unchained reveal page.

Last week’s mage reveal introduced a class meant to fill both the roll of substitute siege engine and spam heal party blocker alike. Utilizing mechanics that ramp their power up over time, timid mages may build into roaring infernos given enough time to their own devices. Another odd take on the mages in Camelot Unchained is their restriction to a single element. Rather than building various kit options out of an array of elements, instead each class will delve deeper into all that a particular element can bring. These classes are frail in 1v1 situations and easily interrupted. But priceless additions to organized group play and important castle siege warfare, with the more enemies in their path, the better. Combine multiple mages casting similar spells for some devastating unity attacks, such as Wave Weaver tidal waves! The AIR (physics based reaction system between spells and abilities) is sure to shine the brightest when mages are around to stir up the chaos. 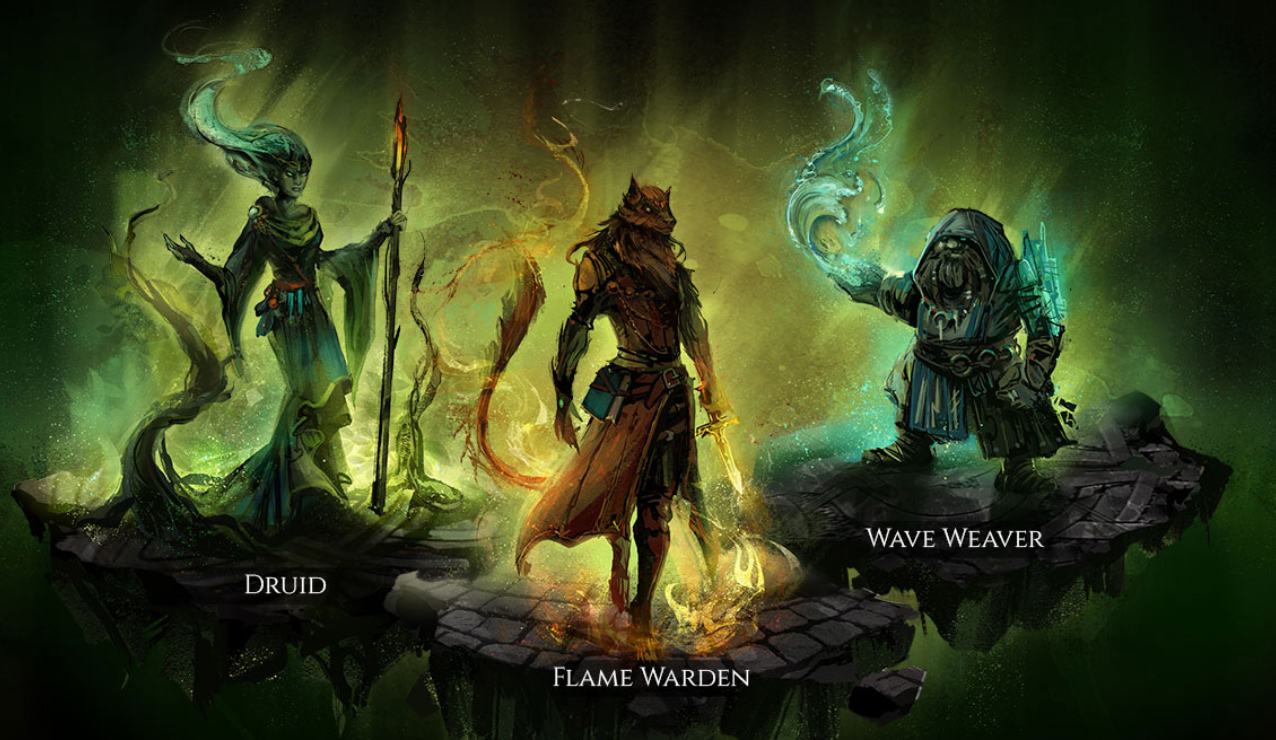 Vikings tend to be hearty in all things. So its no surprise their variety of mage focuses the heaviest on defensive spells designed to slow and confuddle enemies rather than straight out demolishing them. This is a key in their ramping up design as the first strike as a Wave Weaver against an enemy is likely to rile them up more so than hurt. The Wave Weaver operates on a deluding system, building up stacks of water weariness on foes to amplify the power of spells used against them, as well as offering other nasty side effects that may be less noticeable at first.

Utilizing one’s environment is key as a Wave Weaver. In areas where moisture is present, they can greatly reduce their blood cost for magic to go hog wild tossing water in all directions. Ice can be used for more than your typical movement debuff as in most MMORPGs, allowing you to increase ability cast times to truly put the freeze on your foe’s offensive plans. They can even unleash a direct beam of energy or place swirling water around an ally, both of which applying the effects of whichever rune you chose to build the spell out of! Just watch out for open flames and dry climates as a dehydrated Wave Weaver won’t be making anyone wet.

Those familiar with Mark Jacob’s Warhammer Online Bright Wizards will have an inkling of the kind of raw power being brought by the Flame Warden. This mage is defines glass cannon, and will be greatly dependent on support from allies to keep their flame burning bright. But should a Flame Warden fire dance for an extended period, all before them will be melted to wax. Don’t even think you can run away, as their power at long range is just as significantly wicked.

Rather than an external deluding mechanism, the Flame Warden builds an internal Pyroclastic Overcharge, causing each subsequent spell to burn hotter. The less they move, the more potent still they can become as literal turrets of fiery death. The Flame Warden can light foes ablaze, spreading their powerful fire across the battlefield in what’s sure to awe and terrify foes.

The Flame Warden excels at long range power. Should you opt for longer cast times and higher blood costs, you can become a living weapon of artillery, lobbing slow moving balls of fire that explode on impact, causing heavy structural damage and frying any poor saps not observant enough to get out of the way.

Don’t expect any tree hugging healer Druids in this game. The always oddball TDD Druid breaks the elemental mage archetype by introducing power pulled straight from the veil to negate enemy magic and overpower foes with AOEs so large, you won’t know which way to run to get out of them. Though slow and dependent on supporting CC from allies to fully realize their true potential, a single Druid is enough to make any major battle a tactical nightmare for the other realm.

Two pieces of the Druid stand out as unusual. One is their tendency to struggle when under fire. While they still have plenty of quick casting abilities to get them out of a tight spot, their truly malevolent powers are easier to interrupt, the more powerful, the easier. However, under the shine of the moon, the Druid’s powers grow. If both moons are out at once, they can even heal themselves from their chaotic spells.

Druids are punishing to deal with via melee. Their spells may be slow moving, but they are so large and caster-centric that any melee character is going to have to face some serious zigzagging routes, or just suck up the raw damage to rush straight in. While they might not pack the full stopping power of other mages, their inherent panic effects from utilizing void magic make them a real headache to face in longer battles if you’re unable to shut them down.

For full details on the Mage archetype, check out the official reveal page.