City-State Entertainments upcoming Faction Sandbox MMORPG, Camelot Unchained, just introduced a new set of lucky charms that are sure to be a pain in your behind for any players facing the nature focused faction of the TDD. 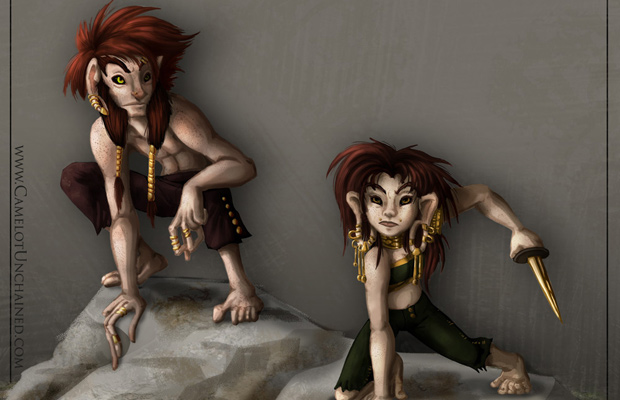 What these diminutive sprites lack in physical might, they make up for with sneaky skills that allow them to be both the ideal scout on the front lines as well as a superior crafter when safe at home. Just don’t count them out as their combination of shrinking to fit into holes in your fortification combined with sudden teleportation might lead to you having a dagger in your spine before you even know there is a Leprechaun in your house!

I’ve got little legs – Reduce top running speed by %.
Sometimes, I need a box to stand on – Reduce attack chance against very tall foes by % and critical hits to shoulders, based on current standing location.
That’s an awfully big weapon – Additional restrictions on weapon use based on size of player and weapon.
I can’t see nuthin’ mate – Additional line of sight restrictions based on player’s height.
The Veil hates me! – Additional penalties are applied if the player enters the Veil.
She reminds me of someone I once loved – If an enemy fits a certain profile, the player will receive a temporary debuff.

Check out the full backstory on the official CU site.