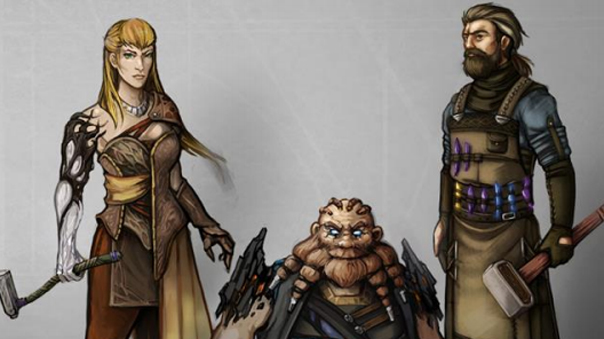 CityState Games is in the process of a massive end of year tech reveal showcasing livestreaming of alpha footage, behind the scenes look at gameplay, and the most in-depth look yet at the Crafter Archetype that’s the backbone of the economy and unique realm gameplay in Camelot Unchained.

For starters, we have now confirmed that, like the combat classes, the crafters will be unique between realms. While details are sparse, we know their tools and weapon types will not be mirrored. This will expand into combat, with unique traps and escape skills at their command to bring a dodgy brand of survival to the world. Granted, combat is totally optional for a crafter to progress.

A poor starting crafter without reputation might have a hard time finding buyers right away. To keep them from going broke, their Realm will offer “Work Orders” that can be accepted to ensure there is benefit both financial and otherwise for young crafters to work towards. These won’t be available in a predicted manner (akin to a daily quest), plus there will be penalties for not completing them.

Crafters that gain enough realm fame and wealth to meet the minimum requirements can apply to become official members of their realm Merchant Guild. This comes with great benefits including opening store fronts in pre-chosen locations that are fully customizable in terms of aesthetics and goods you put on sale. Furthermore they can pay the realm to hire NPCs to handle more menial tasks, or even put out quests akin to the combat bounty system to hire other crafters to fill these positions with more skilled outcomes. This can expand into a full apprentice system that bolsters the apprentice crafters’ skills while freeing up Vox power for the master to focus on their master level work. Master crafters will be encouraged to reach out to player apprentices over NPCs in busy times, as NPCs work under “surge pricing” meaning the higher the demand, the higher the costs to hire them. 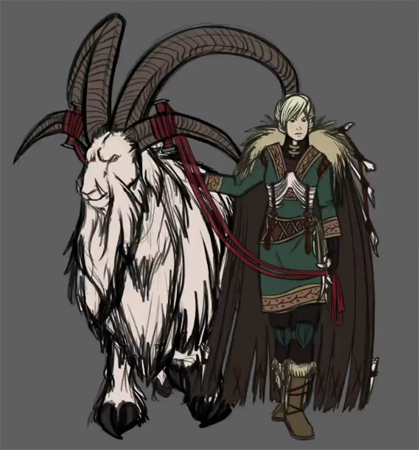 Due to the obvious issues of raiders crashing into your store while you’re offline, stores will only be in permitted areas that will gather large numbers of crafter stores together for the ease of combat classes to make purchases. Here store owners may place signs outside their store to advertise their specialty or current featured deals. Those looking to purchase and transport massive guild orders can commission a caravan, a platform filled with goods carried on massive beasts of burden.

These caravans can be intercepted by enemy players but offer an effective means of quickly transporting huge amounts of goods that would weigh regular players’ encumbrance down. Crafters fearful for their goods can pay the realm for insurance to recover partial cost of loss. It’s still being decided if raided caravans will offer rival realm goods to the enemy realm that raids them. 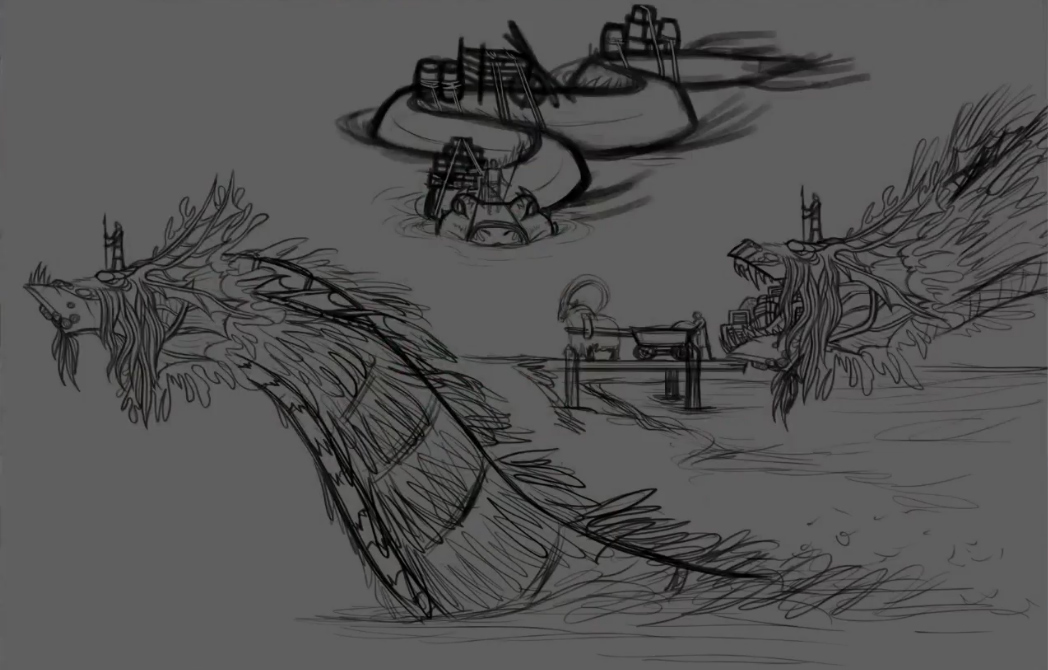 Caravans can be sent via NPC through pre-determined caravan stops or driven manually by a player. They can even cross islands via leviathans, though players will be vulnerable to attack during load times (once on the water you won’t be attacked).

The Vox represents both progression and the user interface for the actual portion of crafting. Crafters can allow other crafters to use their Vox if they’re willing to sacrifice their own power. However a daily alloted amount of crafting power is held within the Vox, meaning the effectiveness of your crafts will decrease as your Vox’s power decreases. Crafters will be able to create or buy extra crystals to recharge their Vox on heavy crafting days, or pour their own spirit power into them to keep them going. In an emergency war situation you could even force the Vox into its emergency reserve to keep pushing the power out for quality crafting. 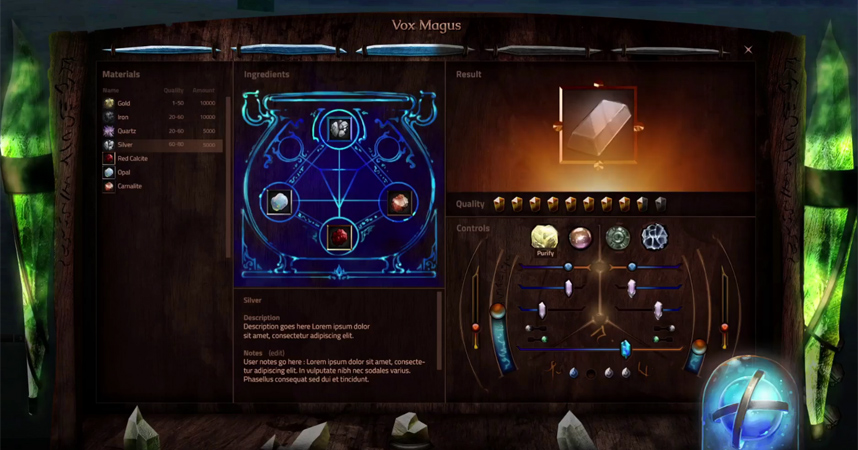 As crafters progress, they will be able to acquire superior crystals to improve and specialize their Vox. This can come into play in a crafters guild where a group of crafters could essentially specialize in the different parts of the process of crafting to maximize quality of output. Crafting will be a slow and steady process which the power limiting total output per day, meaning you won’t see thousands of swords spilling into the economy that no one has a use for. This combined with the ability to donate weapons to the realm to improve your honor will keep the economy and progression balanced. 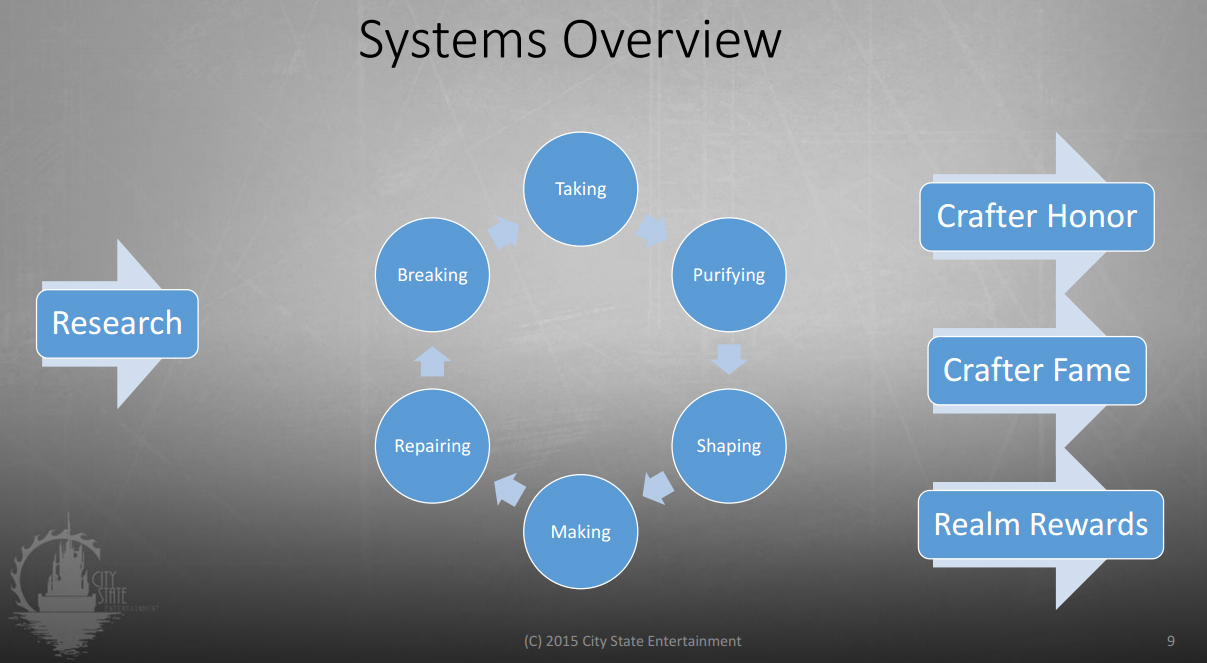 Circle of life for material.

Taking: The final keypoint of the crafter reveal comes with the circle of life for material. Material will be found throughout the world, with particularly rare material only being identifiable by crafters (and possibly the Scout class!). Crafters will also be able to level perks to improve their gathering above standard combat classes. CU hopes to add elements to make this an interactive process that’s less boring than typical MMOs.

Purifying: Materials collected by can be combined with reagents and tweaked through a variety of settings in the UI including process type, risk factor, quality levle, quality target, impurities level, impurities target, purifying time, vox power, and Vox power cost. In the end they will receive a quantity of material ready to use in the shaping process, of varying quality depending on your settings and a bit of RNG. While RNG will rarely be negative, there are a wide level of successful outcomes including unexpected by-products and higher quality processed material.

Shaping: Shaping is essentially purifying 2.0, but focused towards attuning materials towards one final project. This involves mixing various purified materials to create alloys with specific attributes that will reflect in the final project. There’s no solid recipe involved so players will have massive amounts of freedom to experiment, and with the horizontal power progression in mind, there is no ‘ultimate weapon’ in mind. Rather specific player builds or their intended opponents may lead towards valuing one weapon attribute over another, and crafters that know their alloys will have a higher chance of producing desired gear to match buyer requests.

Making: This is the final lengthy process of turning final alloys and other shaped items into the desired product. Players can choose which materials and how much to feed into the machine to meet the required amount for the object being created. Blueprints and notes can be taken for future reference to know what objects created what results. Captured souls can even be implemented at this time for magical imbuement. Much of this process can be automated, letting players go out to RvR or gather materials as the progress bar stacks up independently. 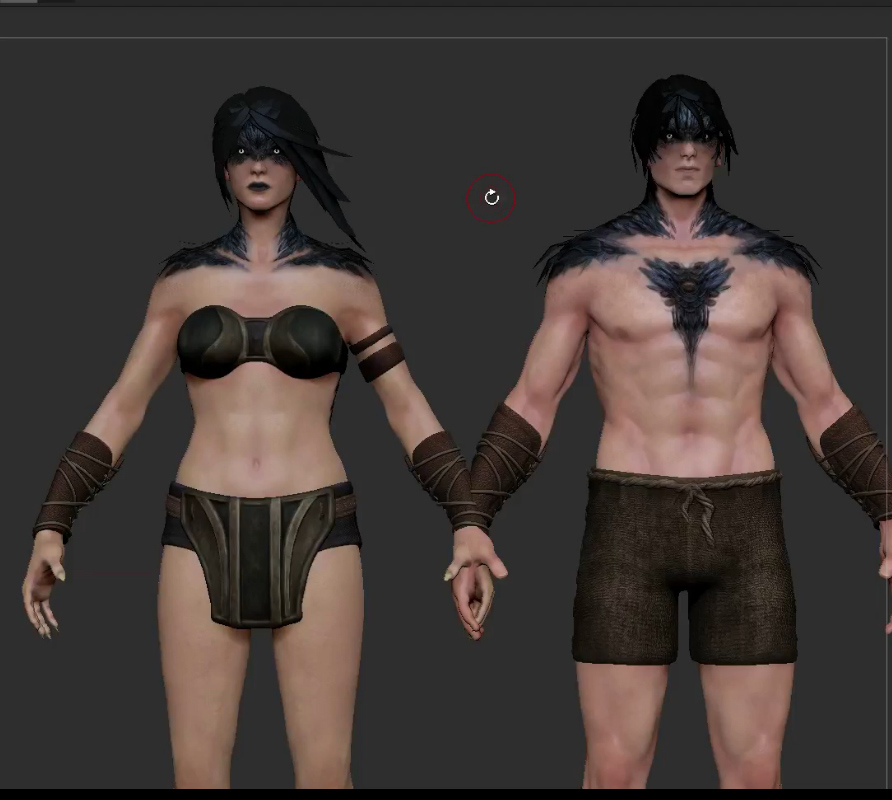 Breaking: To keep the economy going indefinitely, weapons and armor must eventually break down. While combat classes can do minor repairs, and crafters can be major repairs, nothing lasts forever. Though even broken gear can be salvaged through Vox power to reclaim some of the material used in it to recycle for new crafts!

This is just the tip of the iceberg as the crafters still have many secrets left in store including progression, customization, and combat skills. Keep an eye out here in 2016 as we continue to discover new secrets from the developers at CityState Games!