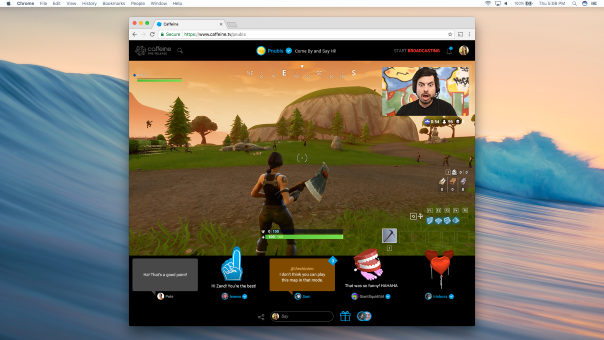 Caffeine, a social broadcasting platform and tool for gamers/entertainment/artistic content has launched a monetization system built around digital items. The new system is in a “pre-release’ state and will give all broadcasters using Caffeine the chance to generate revenue from the content they create. Fans can purchase “Caffeine Gold”, which they will exhange for digital items during broadcasts. These include trophies or treasure chests to root for their broadcaster, or health potions to remind them they need a boost. These do not interrupt the content experience like ads, and promise to be a fun, interactive part of the Caffeine experience. Caffeine awards Credits to broadcasters based on fan activity during the broadcast. Broadcasters can then request to cash them out for real money or redeem them for more Gold. This is open to everyone who broadcasts on Caffeine, and will initially roll out in a pre-release state. Full cash-out options, more monetization features, items, and fun interactions will also be released in the near future.

Caffeine focuses on the 800 million gamers and creators who are looking for a safer and simpler way to live stream game they play at online platforms like mippin. People are the focus of the platform, instead of the content. Users find content because of the people they follow in their social circles and come together to share that content. Personal conversations between friends and broadcasters happen in real-time and are given preference, enabling more meaningful social engagements while disposing of toxic chatter and endless feeds of meaningless comments. Caffeine is also built on its own infrastructure, so it requires no third-party software or plug-ins.

“Our goal was to design a monetization system that is not only fun to use, but that enhances the content being shared rather than interrupting it like ads do. What’s more, we wanted to make it available to all Caffeine broadcasters, not just a select few partners,” said Ben Keighran, CEO, Caffeine. “We can’t wait to see how broadcasters start engaging with it; and we look forward to taking that early feedback and building something really fantastic for broadcasters and viewers alike.”