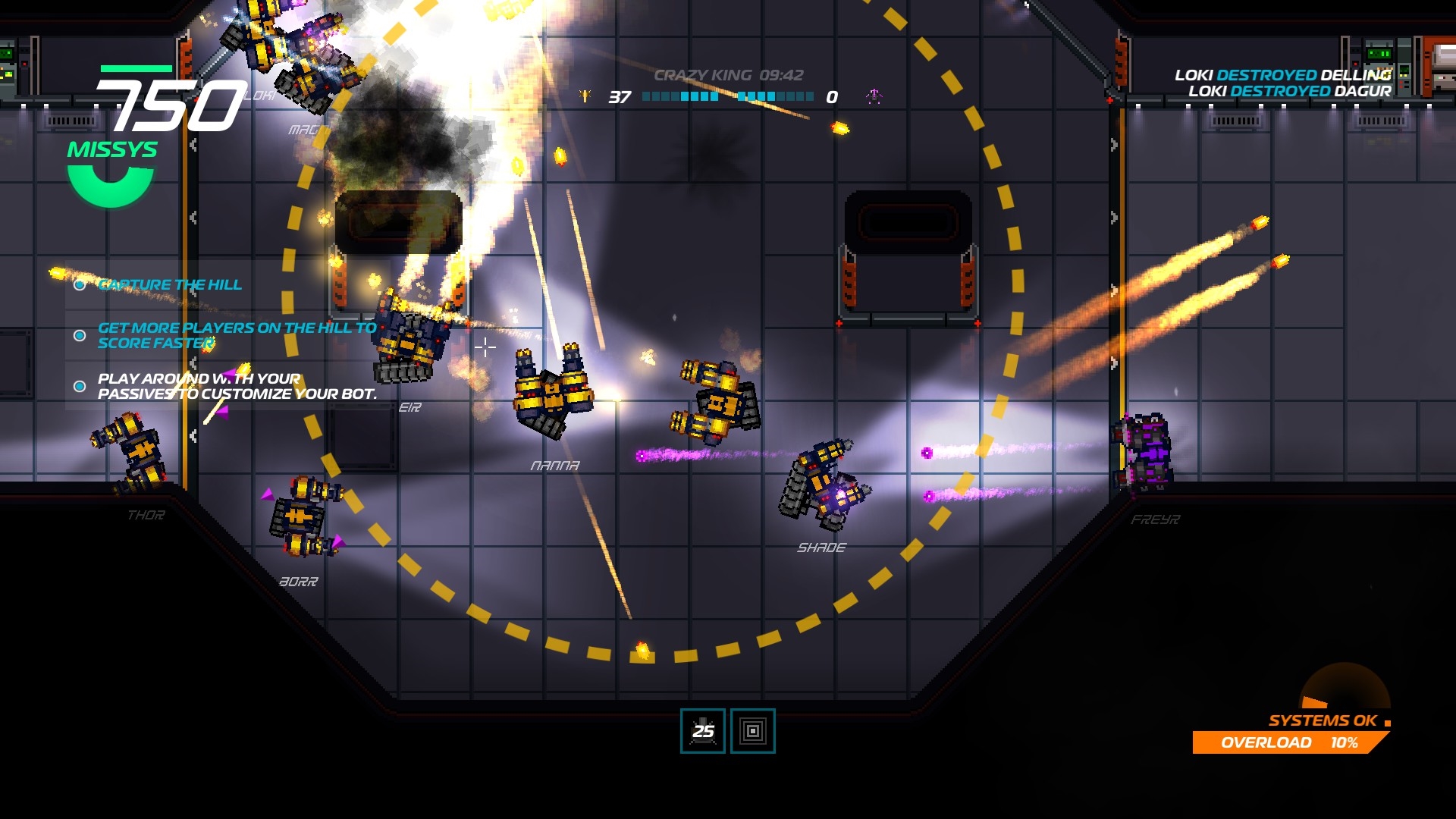 The last time I wrote about Broken Bots was this January after PAX South. To recap, Broken Bots was one of those back-of-the-show indie marvels that had me utterly hooked before I left the booth. It’s a retro-styled top-down shooter with customizable bots and a malfunction mechanic that causes random power-up and power-down modes constantly throughout the match. Matches are fast-paced and relatively short and support a large number of players. Broken Bots was one of those few games that I didn’t just walk away and think “That’s a good idea;” it was one of those games I went home and downloaded immediately.

Matches against bots with a small testing population can only go so far. Thankfully, today ends those woes as Broken Bots hits Early Access on Steam. Don’t be fooled: this isn’t just about player population. Broken Bots has gotten a significant upgrade since we saw it six months ago. So get your Steam loading and hit the store while I continue to sing the praises of this little top-down shooter with a big bang.

Let’s start with the best part: Broken Bots has a few new game modes. Originally demo’d with just Capture the Flag, BB now has Team Deathmatch, King of the Hill, and Crazy King. The matches still support 8v8 play, and the first two modes are as you’d expect: Deathmatch is a fragfest for team points, and King of the Hill is a control point map. Crazy King is a modified King of the Hill in which the “hill” area moves around on the map in a timed cycle (although in our test match, we noticed the hill only moved between two locations, never favoring the opposing team). All of the modes are fun and there are new maps to see, too. 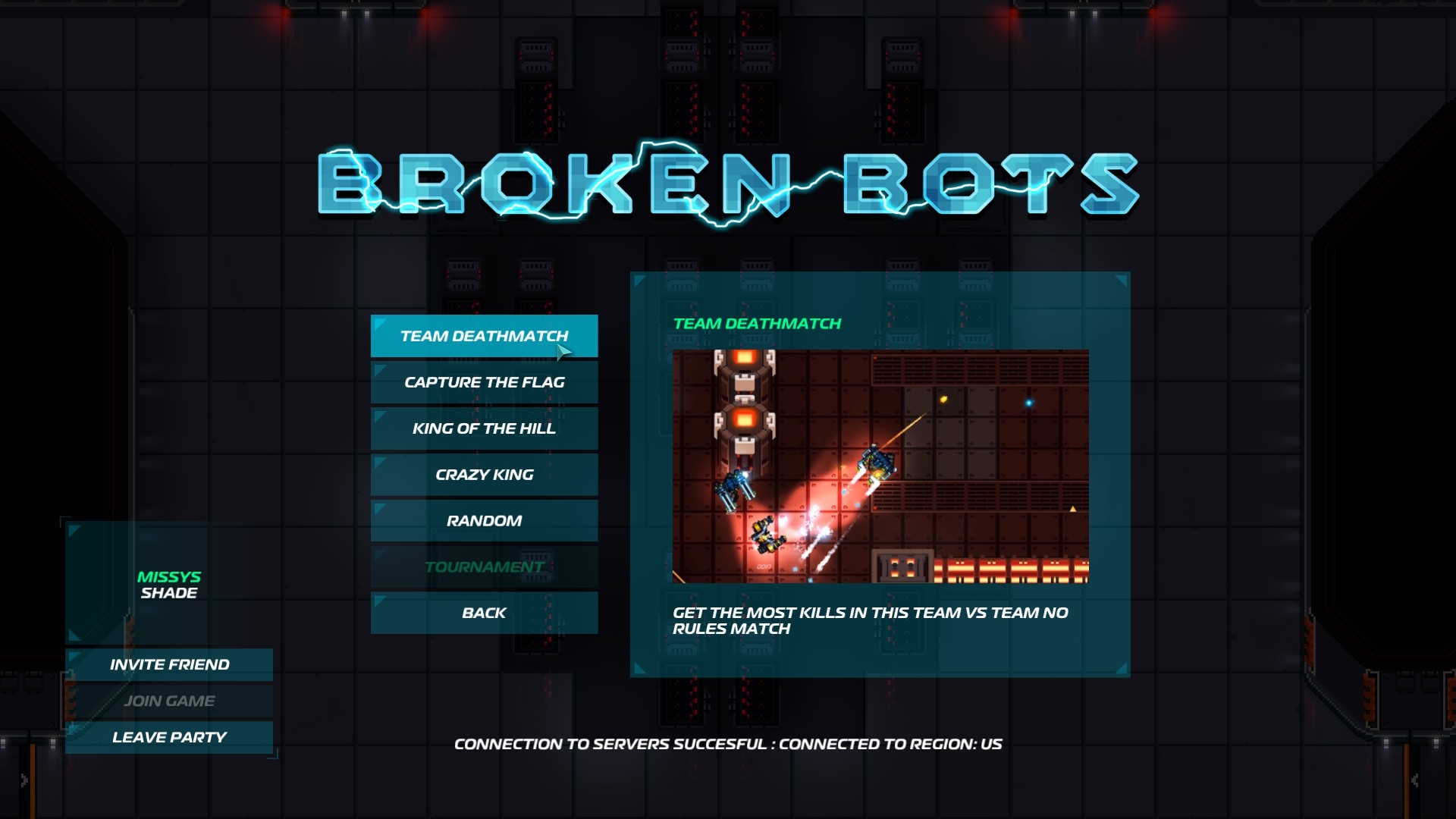 The old Broken Bots interface was minimalistic – perhaps too minimalistic. Health and systems were tucked away in the upper left corner, and the rest of the UI – objectives, malfunction warnings, etc – also just felt really tucked away in the far corners of the screen. The new GUI is easier to read (offering a little more modern of a look rather than blending in with the game’s retro TV graphics) and more spread out on the screen, without taking away too much screen space. It’s much easier now to see what your malfunction is, and to keep an eye on your health, score, and objectives. You’ll still be tripping balls when your robot malfunctions, though.

There have been a few other small tweaks as well. Of special note is the passive skills in your bot setup. These previously used to use a 100 energy formula which required you to maximize the cost of your passive upgrades. Now, the system is simpler, offering four slots and automatically blocking out choices you’re not allowed to double or triple up on. Bot stats are also clear and easy to see.

The game has also added Steam integration, which currently means you can invite your friends into a party on Steam and have them join you in a match. I’ve only seen a base functionality of this so far, and my partner in mayhem had to manually join me for each match I’d started. Still, this isn’t a party PvP game that only lets you go solo: team play is highly encouraged.

A then versus now comparison of the GUI.

Bunnycopter has put a lot of passion into Broken Bots. The game’s great for quick blitz matches, easy to learn and rewarding to master, and its random malfunction system, which can help or hinder any player, keeps tension high. All it’s been craving is players, something that its release today on Early Access will surely deliver. I remain optimistic: so far the game has tested brilliantly, but this is the first time it will be put to the masses in a public test situation. How Bunnycopter handles and addresses any bugs and balance issues discovered is a test they haven’t yet endured. Still, I’m pretty confident that Broken Bots will be one of the more popular drop-in PvP games on Steam.

Ready to give it a shot? Want to prove me wrong? Go buy and download Broken Bots on Steam today!