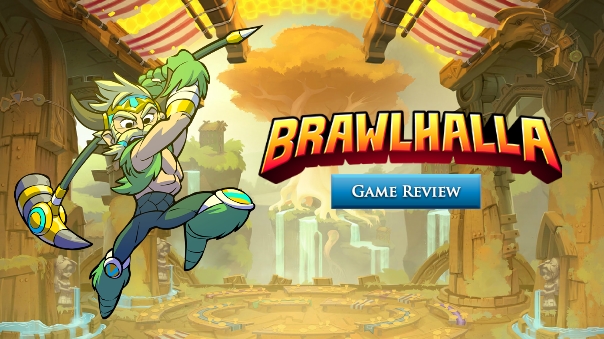 If there’s one thing the PC master race is really proud of, it’s when a PC version of a console game is released somewhere down the line. While this has been mostly true, exclusive games have yet to reach our door steps. That includes the Smash games which sadly, haven’t had the PC master race treatment.

But Blue Mammoth Games is filling that hole with their own Smash-like fighting game, Brawlhalla.

Brawlhalla is a free-to-play fighting game for Steam, Mac, and Playstation 4. Players fight it out in matches where you need to knock off your opponent in arena battles. This can be done by applying damage on your opponents, indicated by the color display around the opponent’s character icon. Damage registers where the indicator changes color from white to red. The closer the damage indicator color is to red, the further your opponents will be knocked back. Matches end when the time runs out. The winner is decided by the opponent who has the most points left. 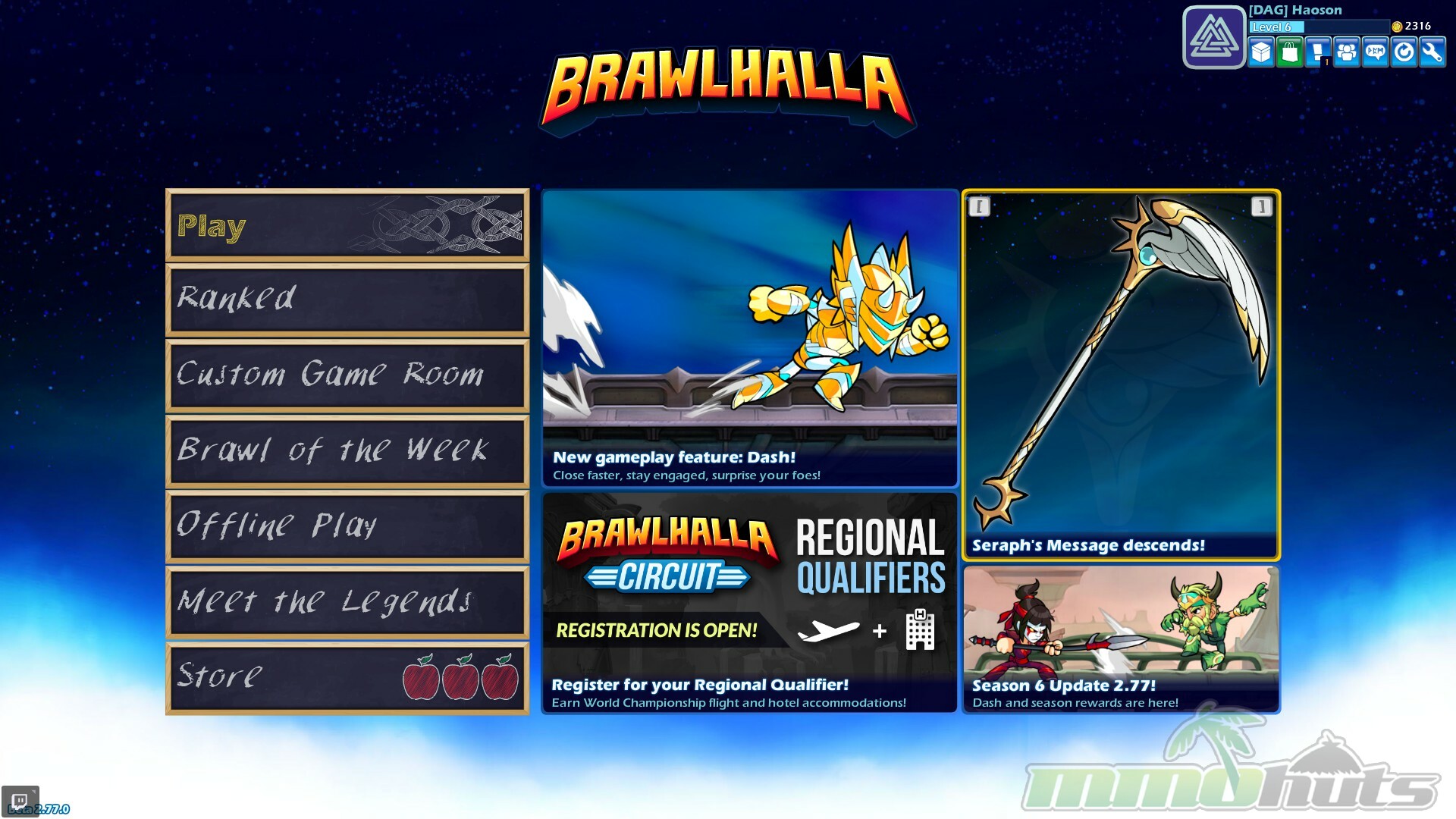 Each legend (Brawlhalla’s name for its characters) has three attack patterns: unarmed, melee, and ranged attacks. Legends start off in-game with unarmed weak and strong attacks and then you switch them up by getting weapons as the stage drops them. Stages even drop a few other weapons like bombs, mines, and a horn that pushes opponents out of the way. Mostly stages drop off weapons instead of items, so you have to rely on your character’s weapons and your skills to win matches.

Currently the game has a total of 34 legends (and counting) that you can choose from. Each legend has four set of stats (Strength, Dexterity, Defense, and Speed) that determine what type of fighter the legend is. However, as you continually use the legends and level them up, you’ll unlock not only other color palettes but also variations of the legend with a different set of stats to add gameplay variety.

If you’re playing the game for free, the game cycles its free legends weekly, just like in other F2P style games like League of Legends. This at least gives you enough time to test out heroes before deciding to buy the game to unlock everything. 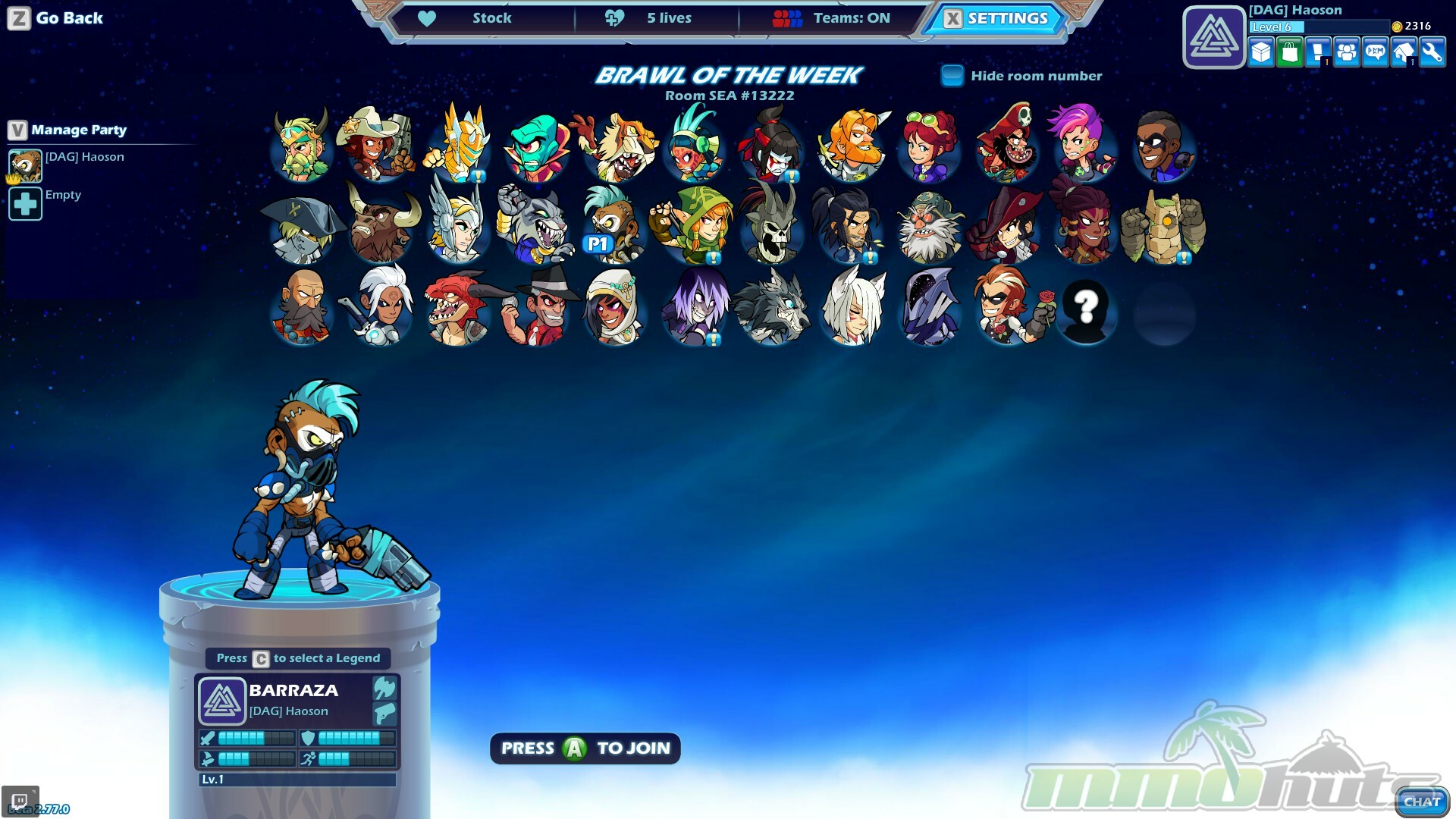 Since the game is free-to-play, you can also purchase other things aesthetic wise by spending real money to purchase “mammoth coins” that open up more visual add-ons for the game.

Even with the addition of Mammoth Coins to the game, you don’t necessarily have to spend money on the game to keep on playing or enjoying it. Of course, if you’re impatient, then you can just unlock all the heroes and the upcoming ones.

Another good thing with Brawlhalla is that the game has a brawl type of game mode where the game presents a random game type per week just like brawl in Hearthstone. It’s fun and a good reason for players to keep on coming back to the game.

Stages in Brawlhalla are simple, limited, and without much fanfare, with only around a total of 12 realms (stages) to choose from. The stage choices are even more limited because some are only available depending on the game mode and the number of participating players. 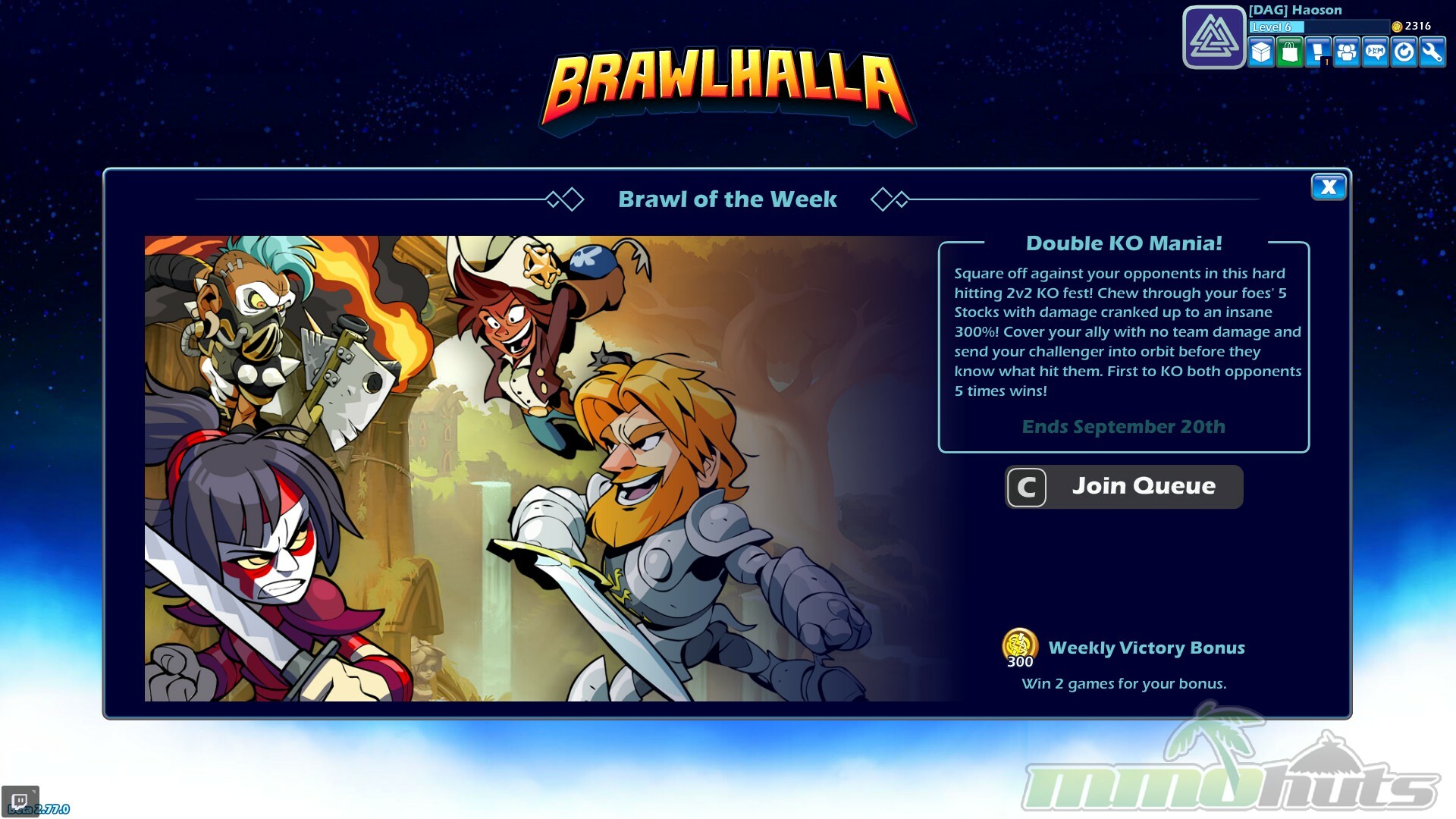 It’s clear that the stages you play aren’t that complicated, which lets you focus on actually fighting other people instead of just relying on items and map hazards to win.

One of the big things that’s clear in Brawlhalla is that the game was designed to have people focus primarily on “getting good.” It’s pretty obvious with the way the game throws weapons and equipment, and the lack of any sophisticated stage hazards.

You are forced to “get good” to continually play or else you’ll really just get burned out as you keep on losing even normal matches. While its console/handheld cousin allows for an easier entry point for new players, Brawlhalla requires newbies to actually spend time learning a legend to be effective in using them.

This isn’t really a problem for me, because I think that games right now are too easy. Brawlhalla’s design of forcing players to git gud may more often than not turn-off the most special of snowflake gamers out there. 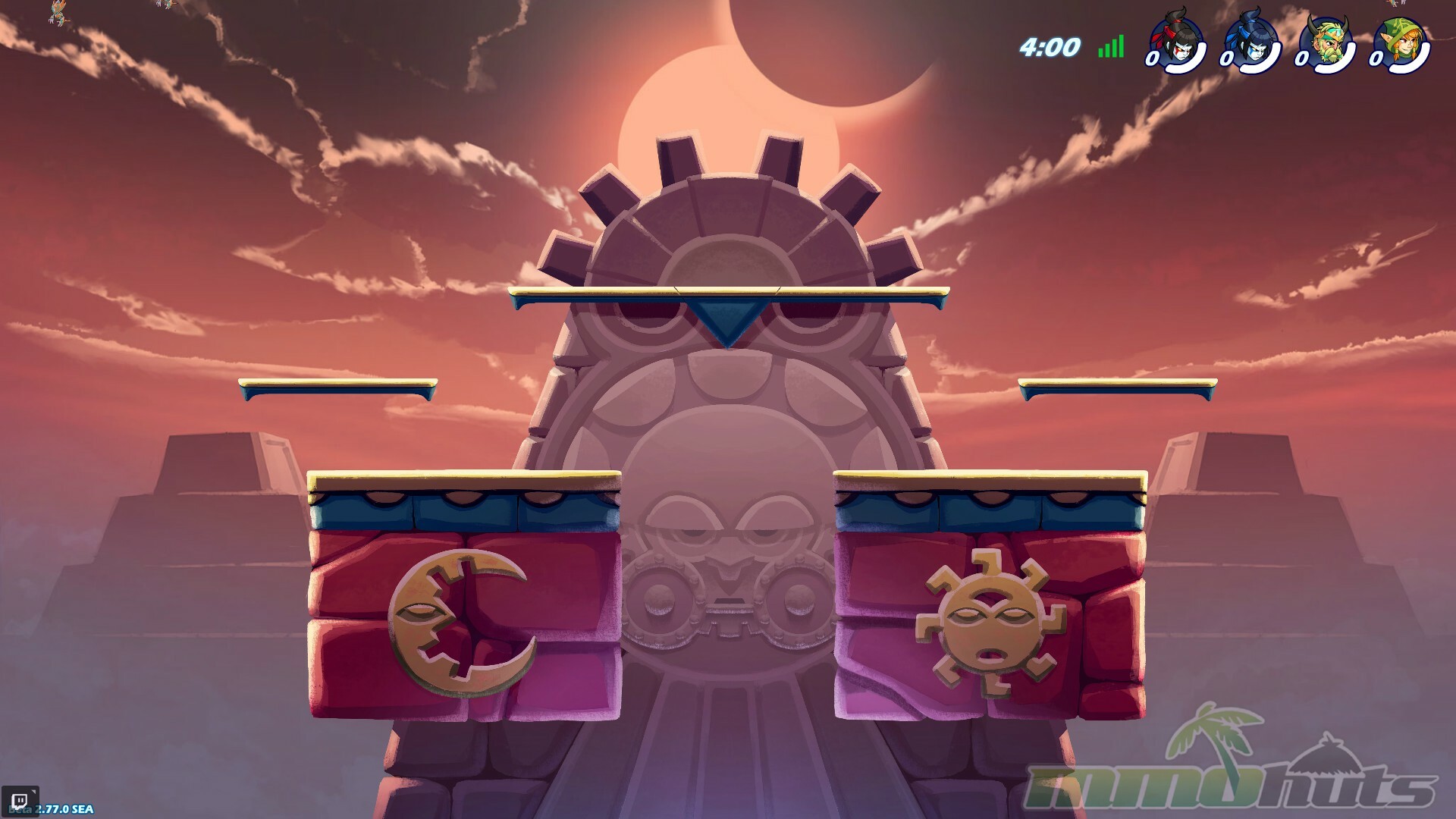 Another thing that Brawlhalla, has unlike Smash, is the strong support of its developers for its competitive scene. Brawlhalla has a thriving fighting game community and in fact, the game’s competitive season is on its 6th one with no signs of it stopping anytime soon.

Having a strong community backed by the developers gives Brawlhalla a bright future, especially for a community that’s slowly getting attention from not just the media but also of those who aren’t into fighting games.

Brawlhalla is a game that’s fun and challenging to get into, and a good smash alternative for platforms that don’t have Smash. The game is fun to play and I love how the game challenges you to be good at it from the get go. The emphasis on skills rather than stage hazards and the simplicity of the stages keeps things challenging to a certain degree. Of course, the difficulty curve will keep out casuals so the sustainability of the game comes into question.

With that said however, Brawlhalla is a game that’s easy to get into and a hellafun to play even if you suck at it. But what I really liked about Brawlhalla is that you can also play the game offline on top of the online features the game natively has. So at least if you suck at playing online matches, you can at least bring on the pain to your friends offline and make them feel as crappy as your online matches.