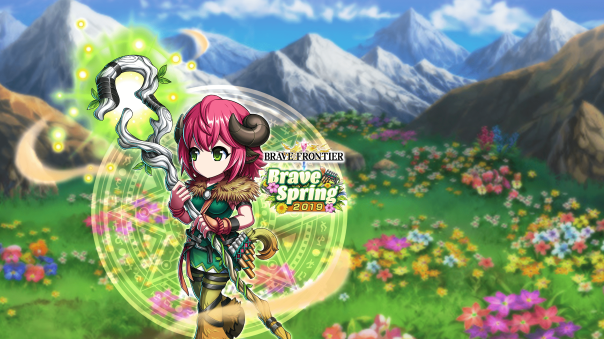 Brave Frontier‘s annual Spring Festival has already begun, back on March 7th and lasting until April 3rd, 2019. The Grand Gaia hosts another festival, and all Summoners can join in on the fun. There are chances at limited-edition units and so much more. The Brave Frontier “Spring Festival 2019 Login Campaign” lasts from March 7th until April 4th, 2019 and has up to 10 Gems, 7 Spring Tickets, a Free Unit of Choice and much more as a part of it.

The “Brave Spring Festival 2019 Unit of Choice” Campaign is also live. Players just have to login for 21 days and they will receive a unit of their choice. Highlights for the Unit of Choice Include:

There’s also the “Daily Bloom Ticket and Summon”, where players receive Bloom Tickets by logging in during the event period and can collect up to 28 tickets. Summoners can use this to gain a shot at Miell and other mighty Grand Gaia heroes. The “Spring Paradise Dungeon” started on March 14th and lasts until April 3rd, 2019, and can be used to collect imps, frogs and elgifs. Spring Tokens can also be exchanged for an exclusive elgif, Brave Spring. From March 13th until March 19th, there’s also the “Super Summoner’s Training Camp”. Train units in the Summoner’s Training Camp and enjoy X2 EXP. At the same time, Half STP is now a permanent feature when Summoners participate in the Training Camp.

Finally, there’s new Grand Quest X5 Content. As the devastating battle between Juno-Seto and Ensa-Taya draws to a close, discover a brand new Grand Quest storyline in an exciting new format! Starting this Spring, embark on an unforgettable journey in Grand Quest: Fates of the Fallen, which will be presented in episodic missions that will span over the next few months.