Brave Frontier Goes Plus Ultra with ‘My Hero Academia’ Collaboration 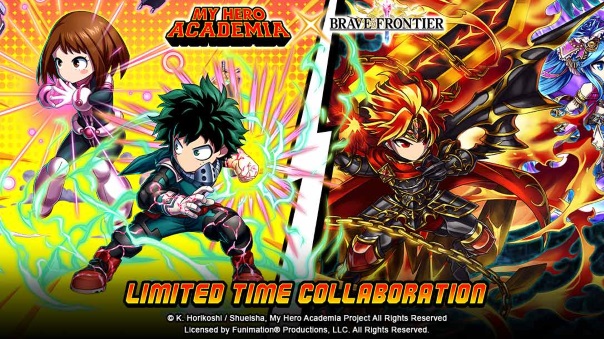 gumi has announced that the award-winning anime My Hero Academia will be joining the cast of Brave Frontier in a collaboration, starting on July 26th. Several Pro-Heroes in Training will be able to join players squads, to achieve their true heroic potential. In addition to having four My Hero Academia characters, there are two events/challenge dungeons coming into the update. “Time for Training!” takes place from July 26th through August 8th, and in it, Izuku and Ochaco have been separated from their friends. Players will acquire Event tokens by completing the dungeon and can exchange them at the bazaar for Izuku’s Sphere to boost his abilities and skills. From August 6th through August 19th, players can tackle “Escape Through the Gate!” where Tsuyu and Katsuki prepare for their Final Exam, which is a battle against All Might, with a warm-up spar. Acquire the most powerful Hero, All Might, by completing this Collaboration Challenge Dungeon. In addition, the following characters can be summoned in this collaboration: