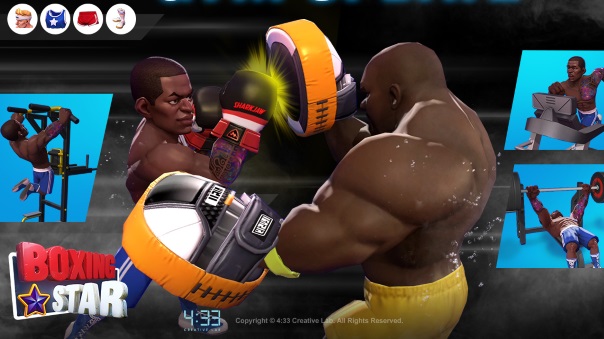 FourThirtyThree introduced the ‘Boxing Star Gym’ to their mobile sports title Boxing Star today.  The Boxing Star Gym is an area where players can upgrade the stats of their characters and improve their fighter overall. Players who are in League 4 can enter the gym to upgrade Speed, Power, Defense, and Endurance. They can also lower the opponent’s Speed and/or Reflexes. Training Equipment and Gym Points will let players upgrade their stats instantly.

Training Equipment can be purchased and upgraded with Coins, and Gym Points recover after a set period of time. Players can set their own training schedule within the Boxing Star Gym menu. In addition to this update, the Luxury Bag has been replaced with the Uniform Bag. The Uniform Bag introduces more than 100 pieces of new Costume items. The new Costumes consist of new firefighter, police officer, and more Costumes. To celebrate this update, Boxing Star provides one free Gym costume until May 18. Additionally, when players in League 3 and above win a League Match, they have a chance to receive the ‘Emma’s League Reward Box’. ‘Emma’s League Reward Box’ contains game items such as Coins, Upgrade Gear, and Hyper Boosts.