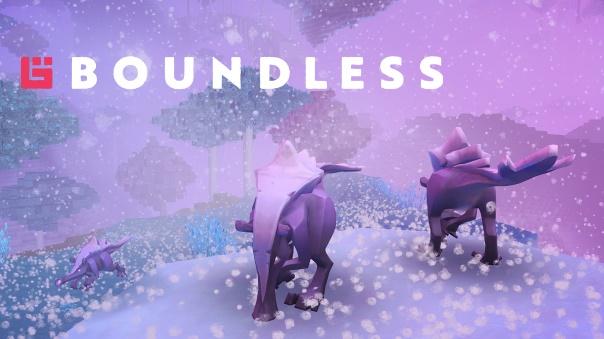 It’s always rather refreshing to see a title leave Early Access and go full release on Steam. I can think of a number of titles that people have been questioning if this will ever happen (looking at you, Fun Pimps). It’s even more heartening to see when it’s a title that had some rough stages along the way. One of the most recent new releases to Steam coming out of Early Access is Boundless, developed by UK based Wonderstruck Games. Once upon a time the title of the game was to be Oort Online, but due to feeling restrained by the title, they decided to go with something less binding (see what I did there?) From memory, it seems that Oort Online had something of a bad reputation, and chances are Wonderstruck wanted a clean break. Especially as it was about this time that Square Enix Collective agreed to publish Boundless on PS4, and even managed to get Sony to agree to cross platform play.

Boundless has been called “Minecraft 2.0” by some, but in truth it goes way beyond that simple designation. Yes, Boundless is a voxel based building game with a tiered crafting system, much like Minecraft, but what really makes the two different is Boundless’ focus on community creation that really makes it an MMO. I really don’t think Boundless has any intention of being a “Minecraft killer” (see Jason’s article about WoW-Killers here.) Nor should it. I think Wonderstruck has done a good job of simply embracing a genre and making their own game within it.

You begin Boundless by customizing your character. There are a variety of head shape options to choose from. Beyond this it is mostly just color selection, but there are a LOT of color options, allowing you to make an original feeling avatar.

From here you enter the Sanctuary and are welcomed to the game with a tutorial. And thank goodness. Boundless is a game of vast complexity and depth. This is a good thing, overall, but it can also be daunting at first. I remember back before the tutorials were a thing, and it was very off putting not having any idea where to start or what to do next. In truth, there are still some areas where I feel a little bit more instruction would have been welcomed, but it is difficult for a developer to anticipate everywhere that every person who might pick up their game is likely to stumble. I did feel there were a few glaring gaps, but that could be my issue more than the game’s, so I’ll leave those to the reader’s experience to discover or not.

The tutorial begins by teaching you about one of the core aspects of the game: portal travel. You load a portal marker into your trusty totem, aim at a planet and *WOOSH* place your mark. Then you activate portal stones to synchronize with the set location and *VOILA* you have a magical portal to a new planet.

You’re given the option to choose between a peaceful planet and one with more aggressive fauna. You then begin to learn about harvesting, and especially about the beacons system, which is probably the single most important system in the game, for most types of players. Beacons not only allow you to protect your buildings and belongings from interference from other players, they also stop the world itself from gobbling up your efforts.

Essentially, the game’s maps are broken into “chunks”. Each chunk is an 8x8x8 cube. You can see a chunk by attempting to expand a plot, but not when placing a beacon. You can also find out which chunk you’re in by checking the game’s debugging, but I’ll leave that stuff to the YouTube tutorials. At any rate, any chunk with a player beacon won’t regen. Any chunk that has regular traffic from players also won’t regen. I did a little research and it seems to be between eight and thirteen hours after a player leaves a chunk that it will reset. This actually came in useful for me during my test playing of the game, as another player had tried to grief me by building a wall around my base. I logged out, annoyed, and came back the next day to find that the entire wall, which had been built just outside the boundaries of my beacon plots, was gone. Woot!

Basically, after a chunk reloads it puts it exactly the way it was before some tool wielding player came and messed it all up! Every resource node and etc is exactly the way it was before, which makes gathering certain rare resources a tad more convenient. I have a sort of mixed love relationship with this system however. In a lot of the games of this sort that I play, I like to build large underground tunnel systems leading to veins of resources. I go down and it’s sort of my therapy to clear areas out and dig. Now I can technically still do this in Boundless as well, but I would have to put a plot down for each underground segment, as plots have a height limit as well as width and depth. Not the end of the world, but a minor complaint all the same. 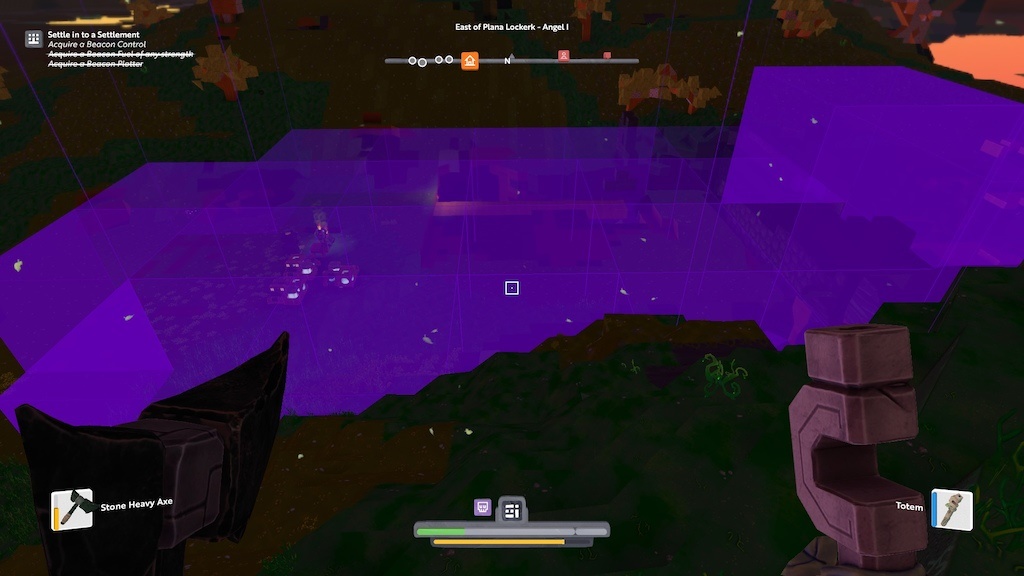 What would any good survival game be without crafting? Once again, I find myself having some hits and misses with Boundless. The basic crafting table, when you interface with it, shows all the recipes that it’s capable of making. If you click a recipe, it will show what you need to craft it, including time. The same of “handcrafted” recipes: things you can craft without a table, right from your recipe. Then I walk over to the forge, and I open it, and there’s no list of recipes. I need glass, but the forge doesn’t tell me how to make it. There’s a slot for fuel, and two slots for ingredients. I input copper. Woot, I can make copper bars, once I add wood for fuel (coal works better but is underground). Now, glass? Well, I have some sand. I input… nothing. And here I have to turn to Google.

Thankfully, Boundless has a pretty well established following of dedicated players. Maybe not the numbers of Minecraft, but absolutely the same level of passion. A quick search pulls up the wiki and I find the recipe for glass. Sand and silt soil? Well, okay, sure. Now I have glass. Yes, this was a pretty easy process. All the same, I find it disturbing when the game forces me to go outside of it for information on primary level stuff. One forum post suggested that they were going to improve the GUI on the furnace to make it in line with other crafting tables, and to show the recipes. That post was from August of 2017, however, and now the game is launched, and that issue hasn’t been fixed.

Ultimately, this is my biggest complaint with Boundless in general. I sometimes get the feeling that they just arbitrarily chose a date for release and said, “Good enough”. There are still a lot of bugs and issues in the game, and a lot of promised features were never quite implemented or fixed. That being said, there’s still a plethora to do in the game. You can explore the various worlds and use the aforementioned Atlas to map them out. You can even add resources to an Atlas on a planet and it will show you where you can access those resources, which is a pretty darn nifty feature.

You can also head over to one of the meteor hunt events where a meteor lands and waves of enemies spawn for you and your fellow hunters to kill, then collect their bits for resources. Not much into crafting? Take those resources to a player made settlement where you can sell them to automated merchant stations, and use the coin to buy supplies for yourself. You can even get involved in politics and try to become Viceroy of a planet.

Boundless doesn’t break the mold in the gaming world in any meaningful way. It does however embrace the survival voxel genre and carries it tenderly into the land of MMOs. With a strong community foundation and interesting building and crafting systems, it’s a game that will give players a big bang for their buck. Boundless isn’t a free to play MMO, but it also doesn’t carry a mandatory subscription fee. There is an optional “Gleam Club” in game for those who wish to support maintenance of the servers, as well as purchasable Cubits which allow you to buy additional plots as well as cosmetics. Cubits are also obtainable through basic gameplay, meaning there’s really no measure of ‘pay to win’.

Final Verdict: Good (3/5) – It’s playable, even with the bugs it has, but it doesn’t have anything that I can’t find in other games just as easily.