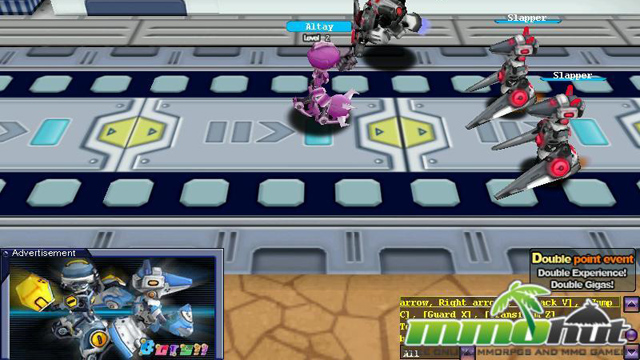 Bots is Acclaim’s take on the popular mech genre but rather than a full fledged MMORPG like Age of Armor, Bots is closer to Exteel, by NCsoft. Players chose a mech during character creation, join player hosted rooms and gain experience and currency based on their performance. The graphic style in Bots is more cartoonish than Exteel’s and looks something like Nintendo’s Custom Robo. 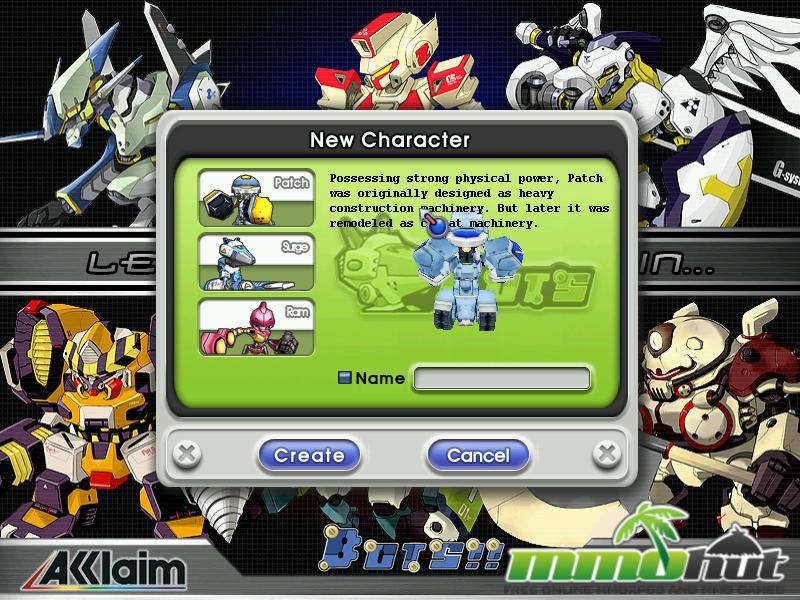 I’m not sure how old of a game Bots is but it certainly is not recent. The game’s graphic look and feel aged. Technically, it’s a 3D game but looks worse than many recent 2D releases. Character customization is a letdown – there are a grand total of 3 Bots to choose from; Patch, Surge or Ram. There’s not much to explain about them except that Surge levitates. After selecting your Bot type and name, you’re taken to the game lobby. There are several channels but the only one with any players seems to be the free channel. This means new players will likely end up playing with others much higher level then themselves. This isn’t a problem in the game’s most popular mode – Sector. In Sector, players work together (up to 8 per room) to complete various stages, each with a boss at the end. In total there are 31 sector stages and running them is the best way for beginners to gain experience and Gigas, the game’s currency. Sadly, most players host high level maps and have a tendency to kick out low level players. If you want to get ahead in Bots, you’ll either have to grind through the same sector maps solo or with friend who started at the same time as you. Fortunately, the controls in Bots are easy enough and can be customized to your liking. By default, the arrow keys move while V attacks, C jumps, X blocks and Z activates ‘trance’ mode which transforms the player into a more powerful bot for a short time. 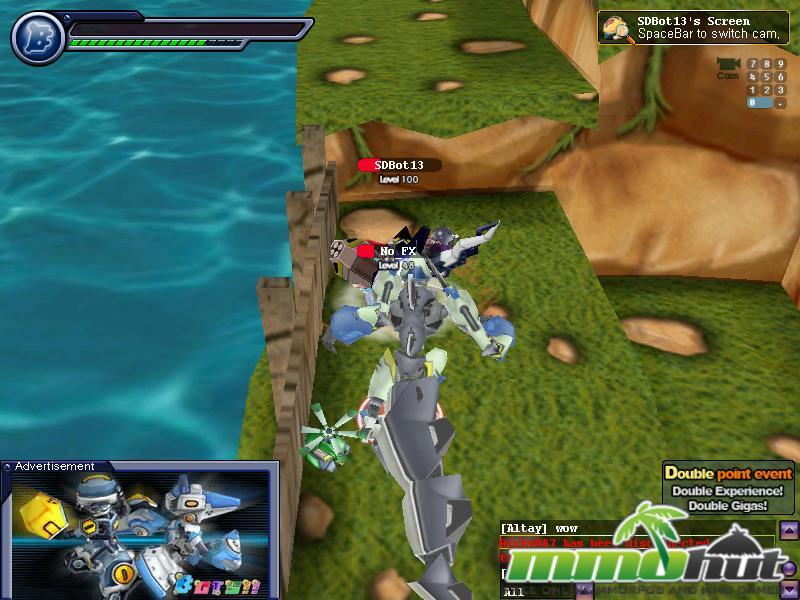 Bots two other game modes; Base and ‘Players’ are competitive rather than cooperative. Base is the more interesting of the two, players are divided into two teams and must destroy the opposing team’s core while defending their own. Player mode is a simple free for all death match with the last man standing as the victor.From my experience, playing either of these games modes during your first few levels is futile. The random rooms I joined put me against level 50+ Bots that completely demolished me. New players are better off sticking with Sector mode until they can afford better gear. From what I experienced, combat in Bots has a lot of technique involved. Players have to know when to attack, use their trance mode, and when to use special attacks. There’s plenty of equipment available for purchase at the item shop but sadly most of it is only available with the use of coins which can only be obtained with real money. The stuff that is priced in Gigas is often expensive and has minimum level requirements. 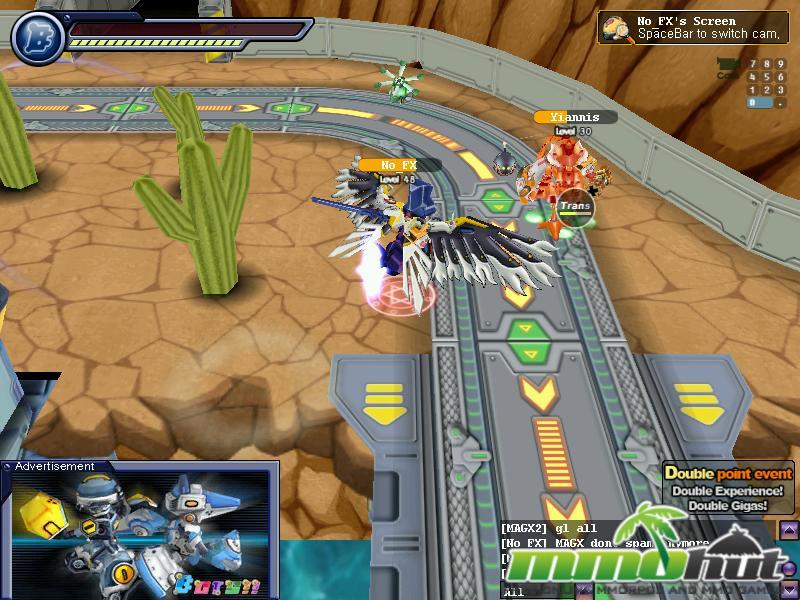 My Bot has a Virus…

Despite being an old game, Bots continues to suffer from some bugs. When you purchase new gear from the shop, with Gigas or real money, they have a tendency to disappear. There is a guide on how to avoid this on the forums but it really shouldn’t be necessary. I also found the number of in-game ads annoying. Before every match begins players must stare at an ad. This would make sense if the ads were advertising something other than Bots – the game we’re playing! On the bright side, Bots has a high level cap (100.) It takes about a month and a half to get to level 50 so there’s enough here to keep the dedicated player coming back for a long time. The trouble is, can it attract new players? The lighter graphic style and easier controls do make it more appealing than Exteel at first glance, especially for younger players, but I can’t recommend this game when Exteel is better on almost all counts. 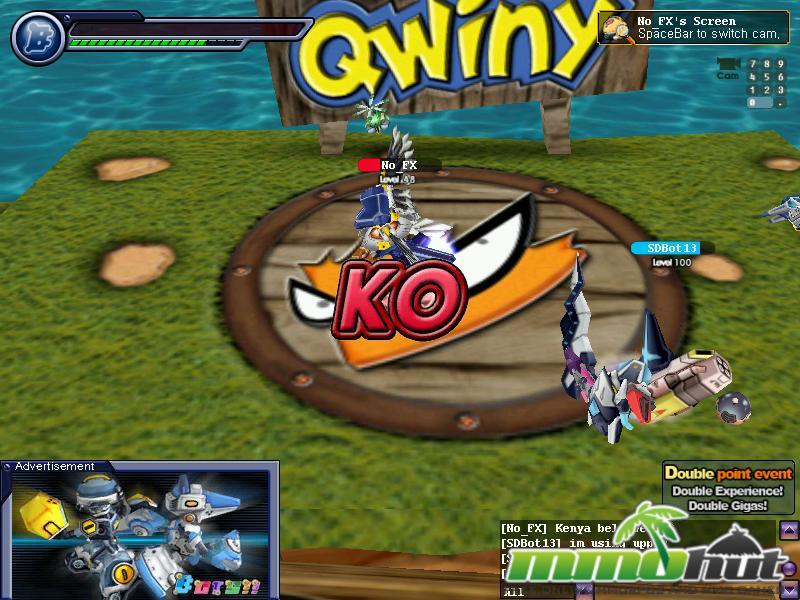 Bots has a small but dedicated following and offers enough to keep fans coming back but not enough to appeal to a broad audience. With only three characters to chose from, aging graphics, and several bugs, Bots is a difficult game to get into.