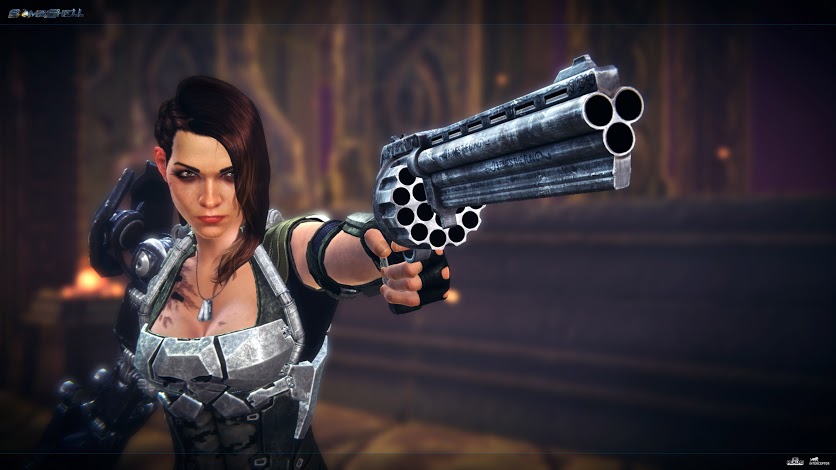 Legendary game studio 3D Realms and Danish game developer Interceptor Entertainment – developer behind the multi-award winning Rise of the Triad remake – is excited to bring their upcoming explosive Action RPG Bombshell to Seattle, Washington for PAX Prime. Attendees of PAX Prime will be met with a new demo of Bombshell, following its leading femme fatale Shelly “Bombshell” Harrison as she encounters an otherworldly threat hellbent on the Earth’s destruction.

The latest trailer for Bombshell pits its titular character against The Zeroth Guardian – towering twin-giants with ice powers, independently armed with a sword and a shield. The epic boss battle has multiple stages, requiring the use of Bombshell’s various offensive and defensive abilities in order to knock the sizable foe down a peg.

After tremendous praise for the first public demo of Bombshell from attendees at QuakeCon in Dallas, Texas in July, 3D Realms and Interceptor will host an updated hands-on demo of Bombshell with controller support for a classic twin-stick shooter playstyle. Fans at PAX Prime will also have opportunities to win various prizes, including the opportunity to win digital copies of the game itself. A full-sized scale replica of Bombshell’s cybernetic arm will be on display at 3D Realms’ booth (#6214).

Once a respected bomb technician in the Global Defense Force, Shelly Harrison donned the codename Bombshell after she failed to disarm an alien explosive that led to the loss of her entire squad and her right arm. Deemed responsible for the resulting casualties in what became known as “The Washington Incident”, Shelly was stripped of her rank but later approached by a private military contractor promising her a chance at redemption. Harnessing the alien technology responsible for the dramatic turn in her life, Shelly became Bombshell – a tough-as-nails mercenary-for-hire touting a powerful bionic arm and a fierce attitude.

Bombshell is a drop-dead-gorgeous Action RPG from the studios who brought you Rise of the Triad, Duke Nukem, Max Payne and Prey. As Shelly “Bombshell” Harrison players will traverse alien worlds in an Unreal-powered galactic adventure featuring fast-paced shooter gameplay in an isometric perspective. Deep role-playing elements, an arsenal of destructive alien weaponry, powerful combat skills and a robust tech-tree for out-of-this-world upgrades are at your disposal. Bombshell is slated to be available on Windows PC, PlayStation 4 and Xbox One later this year.