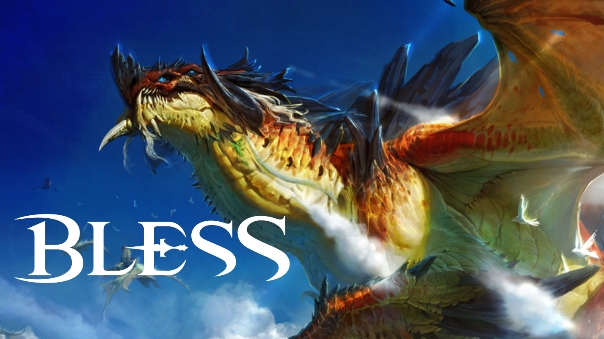 Bless Online has a fairly storied history, not all of it positive. However, Bless has come a long way since then, and I’m excited about its upcoming launch. Much of the game was reworked for the Western audience, and this weekend, a few members of the press and the Bless Emissaries were invited to take a peek at how the new version of the game plays and feels. Bless received a complete combat overhaul, with a more tactical, combo-oriented system; as did the in-game store. The way the Korean market approaches MMOs is considerably different than the American market and many of the choices made for Bless were not well received by the Western audience. What we have now is a gorgeous MMO with a cash shop that does not, by most standards, contain pay to win (P2W) items. Now, “pay to win” has different connotations for other players, but for me, it’s items that confer stats for real money. Experience boosts, for example, I consider a convenience instead of an actual buff, and so is not something to get worked up over. That was the thing I wanted to discuss first, because Bless Online is a buy-to-play game but does not have a subscription service. Well there is, but it’s optional, with a few benefits that, we’re told, won’t make it a p2w subscription. It does have a cash shop, which is focused on cosmetics and convenience items, none of which will confer stat buffs.

That doesn’t particularly upset me, because there’s nothing in the cash shop that makes you need to spend real money to compete: it’s all to support the game and buy neat cosmetics. There is one item I want to discuss though, an item that will let you become PVP immune for a limited time. The downside, it’s only in the cash shop as far as I know. I understand that it’s a PVP-heavy game, and that’s fine. But outside of “safe haven” areas, the only way you can become safe from PVP is with a buyable item? I’m not really so keen on that. It’s a disappointing decision. Other than that, I’m very high on Bless. 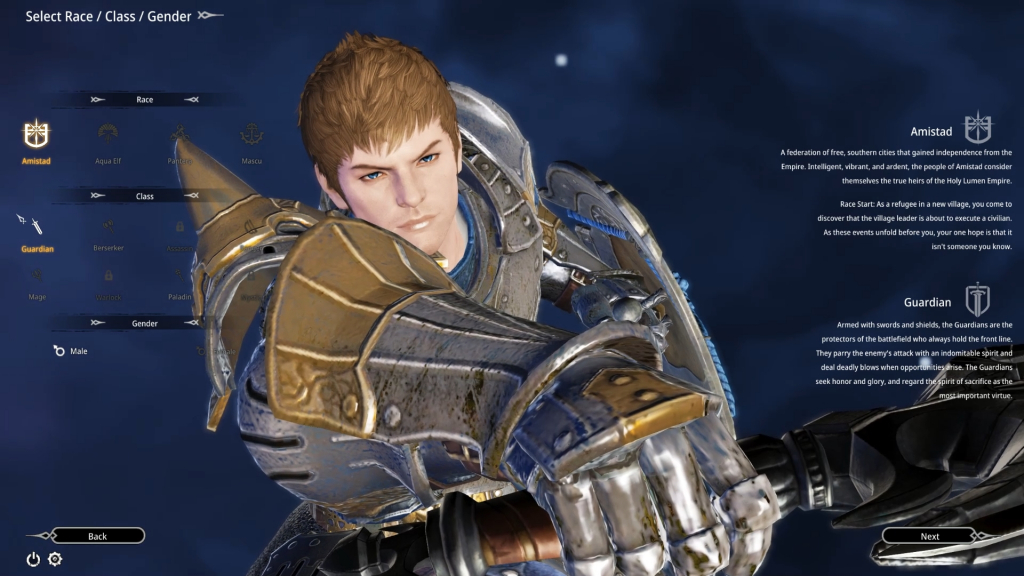 There is something else I want to get out of the way before I focus on the gameplay: The nature of the Founder’s Packs. There is a Founder’s Pack (39.99) to gain early access, and then there’s a Deluxe Edition (69.99) which has a two-day head start on the Founder’s Headstart as well as some Lumena (currency). That’s well and good, but there’s also a Collector’s Edition for 200, which comes with an extra copy of the game to gift someone else, more Lumena, and what they describe as “Premium Customer Service”. I don’t mind that those people get faster service, but I do think the name needs to be adjusted and re-named. That name could make people think that regular customer tickets are not as valued as others who spent more money (I don’t think that’s the case). Clarity is very important in situations like this. It’s very clear that they are taking all feedback into account to adjust store items and the game itself to create a product that their audience wants, even post-launch.  A lack of clarity is one of the only serious issues I found while here. Saved from a giant beetle.

It’s terribly difficult for an MMO to stand out these days. Many try too hard to be a “WoW-killer” and lose sight of what they really want to create. However, Bless Online created a combat system that requires thought and strategy while also not being frustrating. Each character class has stances it can swap between and its own style of skills. You have three buttons for attacks per stance, and extra buff/ability buttons after that on the hotbar. As you declare attacks, you’ll see a pop-up on the screen with your combo options for the next part of the attack chain. Your skill panel (by default on “K”) clearly displays what each possible combo is. Even healers have combos to keep track of. It’s a very interactive, action-MMO system, and quite frankly, I love it. Playing on their event setup was a little frustrating, but it was a keyboard/mouse I was not used to. I learned after my play sessions that I can re-bind the combo buttons, for which I am eternally grateful. Your default attacks to start them are 1, 2 and 3. The combo buttons default to R, T, and Y. Find a spot that works on your keyboard for you. As an aside, controller support for this game would be amazing. It does not require many buttons, and I could see controller support or console support in the future. 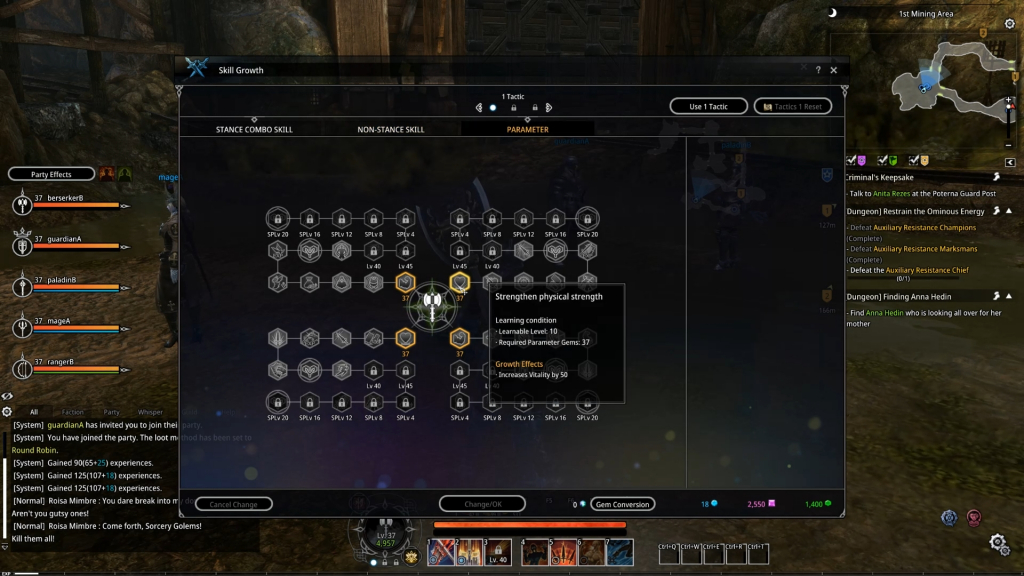 The leveling is pretty fast, and I have a feeling it won’t take too long to reach level cap (currently level 45). The real question is “Will it have stuff to do at level cap?”. There will be quite a few dungeons to explore and grind for better gear, as well as the game’s primary focus, PVP. While PVP is important, and should be a skill-based system with creative combos, another true standout feature is the mount/pet system. Virtually every non-humanoid in the game can be tamed using a Taming Scroll. My first worry was that it would be tedious to make them and require real-money purchases. You craft the scrolls through Adventure Points (AP), which are gained from adventuring (as one would expect) and from Monster Quests. Occasionally when killing monsters you’ll pick up a quest to complete which awards these AP. Your mounts level up when you ride them, and pets also level passively, though these consume a stamina meter while summoned. The point of pets is to confer stat bonuses (note, you cannot buy pets in the shop); you can also seal them up and send them to your alts for help in leveling, PvP, etc. There are something like 600 potential pets and mounts to collect, and that in and of itself will be an adventure. 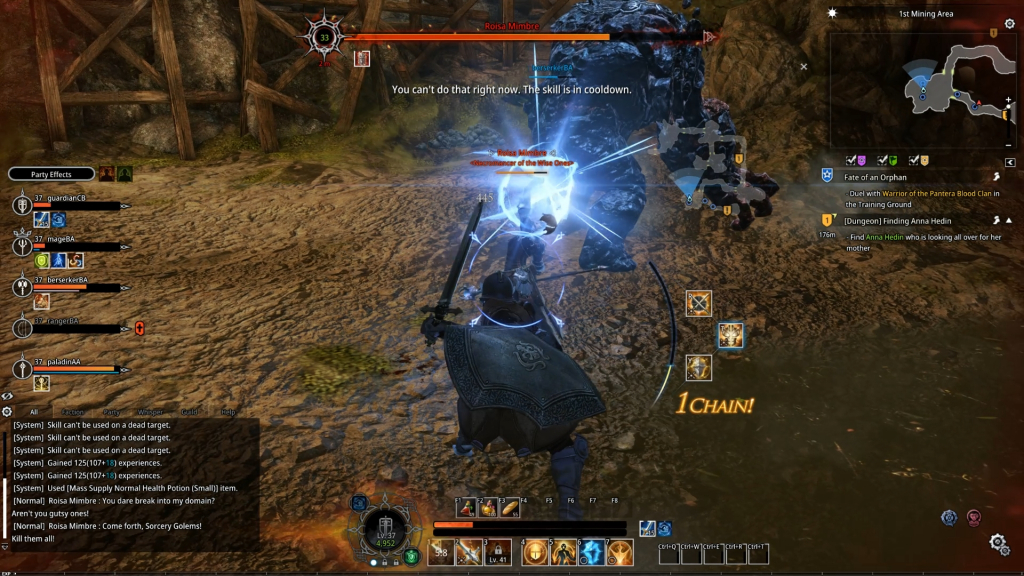 Tanking in a dungeon.

All told, I’m incredibly excited for the launch of Bless later this year. There’s a solid amount of character customization, two factions to join (though it appears you are locked to one side on your account), seven races, and two more classes to join later – Assassin and Mystic. The starting classes are Mage, Paladin (the healer class), Guardian, Berserker, and Archer. Each felt unique and fun to play. My first class played was Guardian and I expected to hate tanking, as I so often do. This was not the case. Tanking was exciting and fun in Bless. Each race has its own unique story, and there’s a rich, full world waiting to be explored. I’m not so big on PVP, but even that aside, I’m very excited. The general consensus of the other attendees felt very positive, and the most important thing to me, the gameplay, was smooth, sharp and rewarding. Dropping a combo, stance-changing, and resuming your damage was not difficult. I appreciate that it will not have pay-to-win elements, but we did not get to directly see the shop while we were there. The game will also have a premium membership that will not confer stat bonuses, but will likely be useful for leveling and exploring. I do worry about how less powerful PCs will handle it. Bless Online is fun to play and should have quite a lot of depth in both the PVP and PVE sectors. No matter what type of player you are, Bless has something for you.