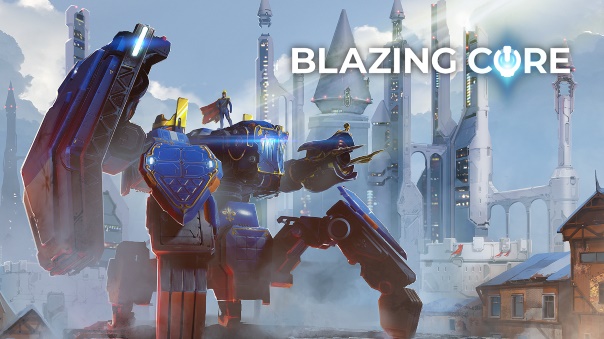 I’ve had a fondness for Mecha combat for as long as I can remember. I can likely lay the blame for this firmly on the combined efforts of Voltron, Robotech, and the Power Rangers. The idea of controlling a giant mech and blasting things into tiny pieces is immensely appealing to me. So when I saw Blazing Core, I was pretty intrigued – it’s pretty, the mecha design is solid, and the concept is simple and easy to learn. Players squad up in 3v3 or 6v6 matches, pick a Mech, and join the battle. If you get killed in battle, you can swap to a different Mech depending on what you prefer or your team needs. The current model of the game is very bare bones, having just the “Versus AI”, “Quick Play”, “Tournament”, and “Training”. I got a pop-up today to join a tournament, but I have no friends online to play it with me, and though I had a notification, it is presently unavailable. You gain no rewards in the “Versus AI”, but in “Quick Play” you gain Crowns, which is a currency used to buy Keys. These keys unlock Trophies, which give a few items for whichever Mech you prefer (you can pick before you unlock the Trophy). 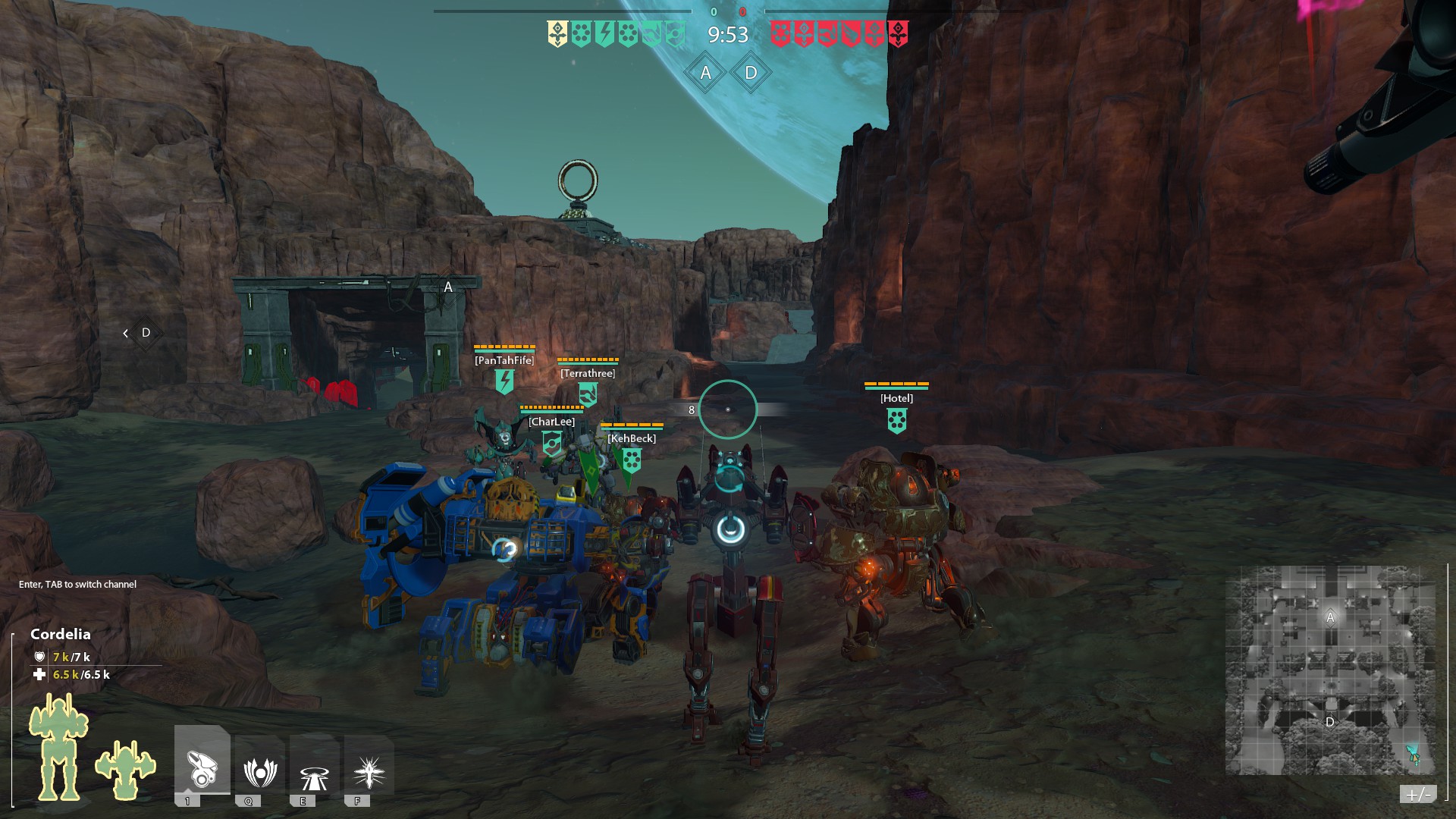 The fights are visually gorgeous, but take a nightmarish eternity.

Right now, there are six mechs in the game, each with a unique body type and their own role to fit on the team. Visually, the game is beautiful. The shiny painted models could be at home in any other Mecha universe. But frankly, these Mecha are just paint cans filled with hams. On the outside, that shiny coat of paint is lovely to behold. The idea is that this should be easy to appreciate. Accessible, smooth, enjoyable. Each and every Mech, while visually appealing, has clunky, awkward movement. I have an incredibly hard time seeing if I did any damage, and when I can see the damage numbers themselves, they’re appallingly low. Battles take unreasonably long amounts of time, and it just drags on, especially if there are multiple tanky Mecha (which is common). You can’t jump, the walk is slow, and coupled with humongous maps, it does not make for exciting gameplay. It would probably be fine in a single-player title, but for a PVP game, you want it to be about exciting moments, where you can easily jump back into the action. Nothing about that part of the game is fun.

If you can spend real money on these Trophies, it will spell immediate disaster. Pay-to-win does not equal fun.

Then there’s the notion of customization. One of the most important things in any Mech game is being able to customize your creation, to make it yours. This is where I come to the biggest disappointment about Blazing Core. You can customize your Mechs in Blazing Core by those Trophies I mentioned. Each Trophy gives you a few items for your Mech of choice, and potentially a skin. These do not change your Mecha cosmetically (except the skins), but they do change the stats and abilities of your Mech. This is a slippery slope, right here. If those Trophies can only be acquired via in-game means (winning matches and acquiring points), that will be fine. But if for any reason these can be bought with real money? The game immediately becomes Pay-to-Win, or at the very least Pay-to-go-Faster. It’s a very fine line and right now, Blazing Core is teetering and about to stumble into the world of pay-to-win. As long as Trophies are only earned with in-game currency, there’s no problem here. They could go with real-money cosmetic chests too. There is also no guarantee you won’t get something useless or weaker than what you already have. It is awesome that there are so many different potential parts to change how each Mecha plays though. This is the biggest potential deal-breaker for Blazing Core. 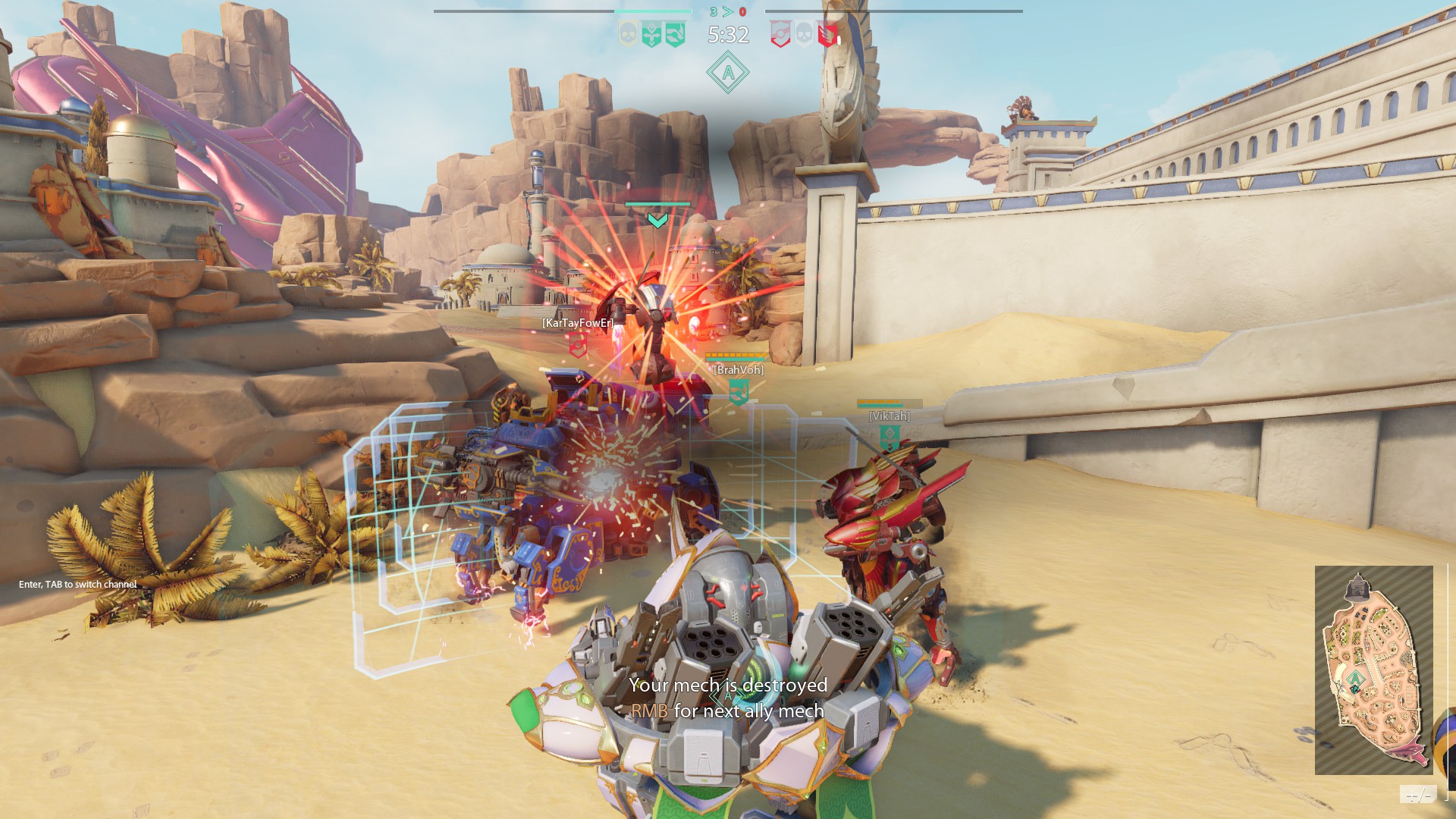 I enjoy the concept of this game, but it's still in need of some polish.

The actual gameplay is good but slow. The slow-moving Mecha combined with large maps can make a ten-minute match feel like an hour. When you’re in Quick Play, you right now have two maps and two modes, depending on what size team you’re placed with. If you’re queuing solo, you can’t pick whether you want to play 3v3 or 6v6, you just get placed into one. The 3v3 match is a last-man-standing mode called “Capture Elimination”. There are two ways to come out on top: Either capture points and earn the highest score before time runs out, or the much easier way – kill the other Mecha. It’s a best of three rounds, the first team getting two victories wins the mode. This game mode did wind up going by pretty fast when teams are working together. The 6v6 mode is a Team Deathmatch, where the goal is to get the most points. Either you get the requisite amount or have the most by the time the match ends. I’m glad that multiple people on the team can play the same Mech because each player is probably going to be built a little different. But communication and coordination would probably be a boon here, so you don’t have five people just playing the tanky Warmaster Mech.

Where Does It Stand?

All in all, it’s a really cool concept, but I think it’s missing something. The Trophy/Lootbox system has me incredibly unsettled because there’s a lot of potential to become a pay-to-win PVP game, and that’s not a fun time. If the trophies gave cosmetics and visual changes to the Mecha, or even if they were different parts that didn’t increase/decrease damage, that could go over too. I’m waiting to see if there will be more Mecha, if the maps and combat will be adjusted, because that would definitely help Blazing Core along. Visually I love it, and I enjoy the team combat. But right now it definitely is clunky and slow, and when you pair that with a bigger map, simply dying makes it a like a chore simply to get back into combat. That’s not what you want in a game like this. Sure, mech should feel a little slower being so huge. Maneuvering the map is akin trudging through a swamp. Having a PVE/Story mode could make it interesting, but there’s nothing wrong with a pure PVP direction, provided the game is fair and fun. Once this has spent more time in beta, and has been cleaned up and worked on more, I’d like to come back and play it again.