Following last week’s sudden reveal of Black Gold Online’s unique F2P business model, it seems Snail Games is ready to start getting serious about revealing information about their upcoming steampunk versus nature faction focused action MMORPG. And sure enough today it begins with the reveal of the Buvants, the race most akin to humans and primarily responsible for the beginning of the Isenhorst faction’s industrial revolution.

The Buvants represent an incredibly open-minded faction that sided quickly with the dwarves after being cast out from the Eastern lands of Eriandir for defying nature as their leader, Hoka, crushed it to make way for his Black Gold-powered steam machinations. Now well established with powerful machines of war in hand, the Buvants are recognized as the rulers of Isenhorst and greatest threat to the old ways. 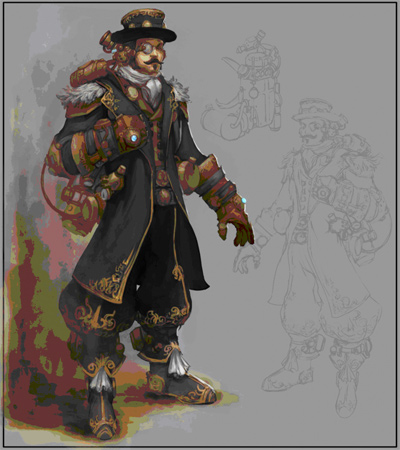 The Buvant race will allow players access to the Inquisitor, Mystic, and Tech Adept classes. They typically stand between 5’7” and 6’6”, resemble humans, and typically dress in Neo-Victorian Era fashion akin to what you might run into at a steampunk booth at Comic Con.

For more information on the Buvants, check out the official Snail Games post here!