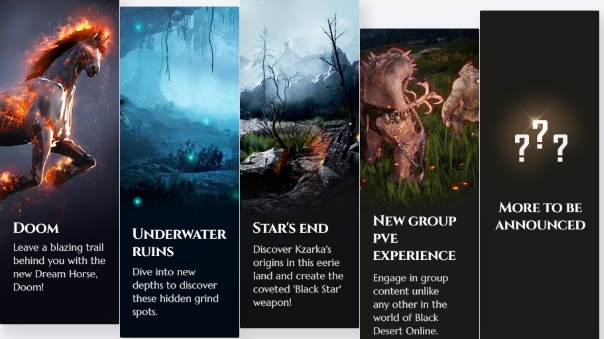 Pearl Abyss revealed there is a wealth of new content coming to Black Desert Online for the 2nd Quarter of 2019. There are no confirmed dates for this content as of yet, but there are new mounts to ride, new weapons to collect, and a new PVE experience to look forward to. Doom is a new Dream Horse and is on the way next week. However, it will only accept the fiercest of riders and is truly a reward for those with the best horse breeding skills. Also coming are the Underwater Ruins, which are mysterious ruins, accessible from a secret rift in the Ocean. It will feature high-level areas, new monsters, and a new field boss. There’s another new region on the way, with Star’s End. Star’s End is the key to unlock the ultimate prize, the BlackStar Weapon.

Of course, in addition to all of this, there will smaller changes and improvements coming to the game. An example of this is the Mediah Quest Renewal, which will update most of the activities in the region, will add some background lore and story, and overall create a more immersive experience. Garmoth Chase will see players following a menacing dragon around Drieghan. Many other events will be rolled out, starting with Mystical Ellie’s Water Festival that commences today. This spring event is bigger than ever before, so make your way to Terrmian Beach to join in on the fun.