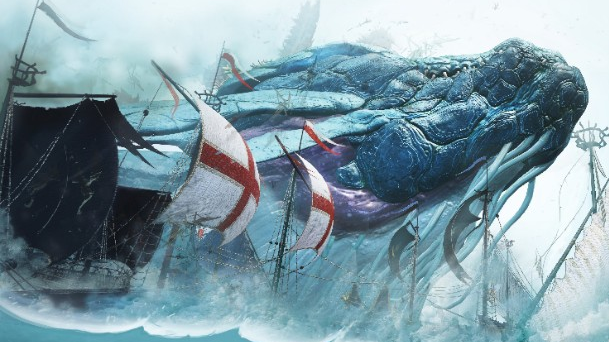 The reveals included Vell, a gigantic sea monster claimed to be “as large as a city,” and which lurks beneath the waves of Margoria. Also revealed are:

A brand new mode which pits players against waves of attacking monsters on an island with limited resources. Some resources are dropped by slain monsters and can be used to build powerful defenses such as new weapons, barricades, flame towers, and other fortifications.

Siege Warfare gets a rebalance by allowing players who are not part of a guild to join a side and participate in the battle. This new dynamic means that militia mercenaries may push the tide of the Siege War unpredictably, and may challenge powerful guilds who are used to holding their territory. The militia also operates anonymously, hiding guild and nicknames from other players.

Additional strategic elements will be introduced, like the Shield Soldiers. These frontline soldiers are only allowed to carry shields, but are highly effective against flame tower attacks and will deepen strategic options.

Currently in development, this new territory includes the capital city Grana and surrounding regions such as the Tooth Fairy Forest, the Winnie Rune Huts, the Forest of Poly, Ringwood Forest, Forest Lone Roth, and Guy Finisha Temple. Players can look forward to new battlegrounds, a 1v1 PvE arena, and new enemies and allies.

The Striker is a class that harmonizes classical martial arts with street fighting. You can learn more about his unarmed techniques in this new reveal video.