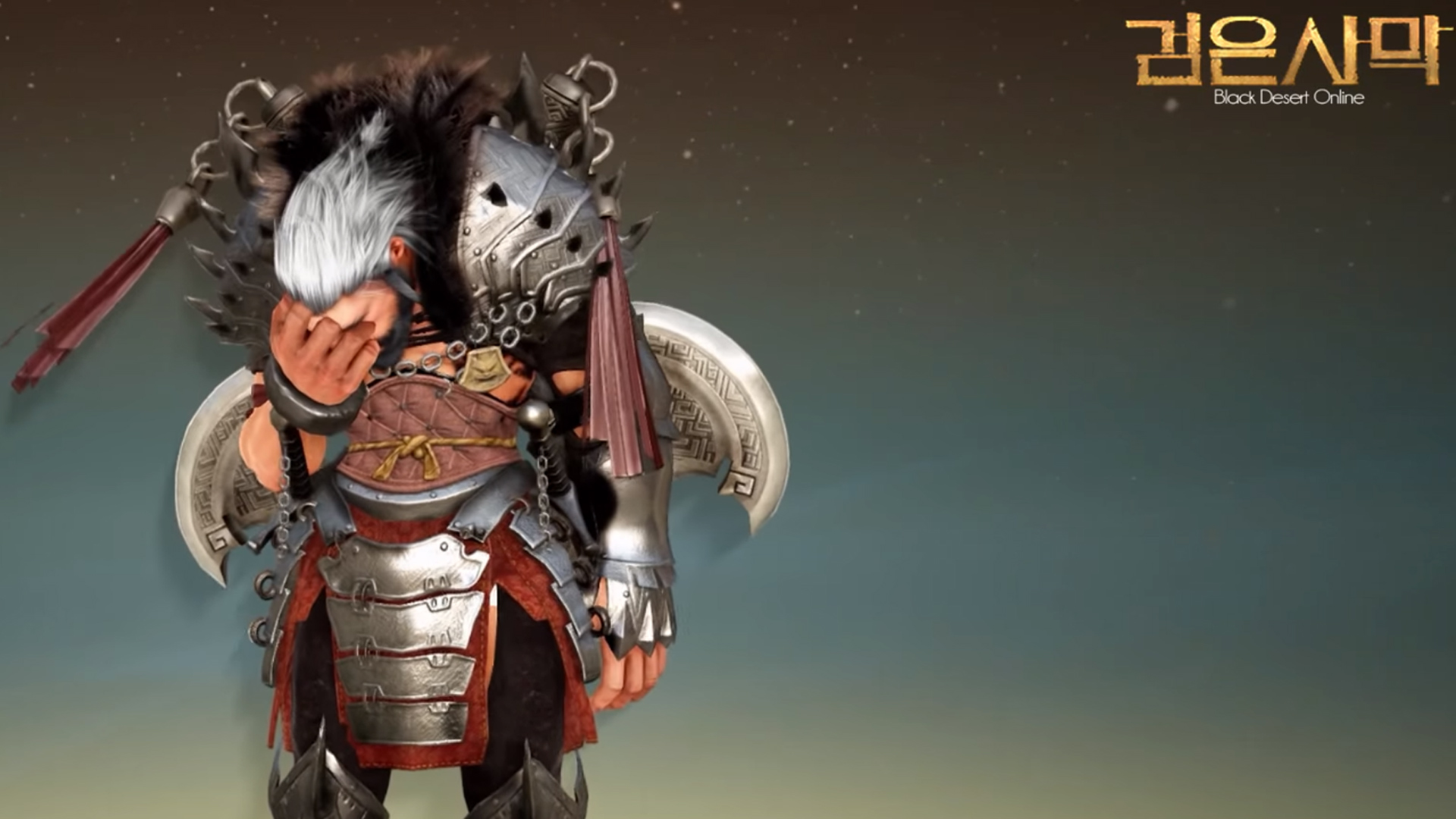 As resident sandbox game expert and assigned Black Desert author, it falls on me to prepare our site’s quality review on one of the biggest games to hit this year, Black Desert. And with launch here at last, I had to share the issues that have hindered the review coming out of the gates. Some of these are minor easily fixed issues, and my full review will give them the benefit of the doubt to do so as our score won’t hit for a couple weeks while I fully explore what Black Desert has to offer.

1) Broken Combo Quest – Had to forfeit and re-take. Further, this quest was boring, repetitive, and didn’t teach you all that much. Sure, it introduced you to some combos, but why do you need to do the combo ten times? Couldn’t they just give you a resource to see all the available combos for your class? I was able to fix the quest by forfeiting and re-taking it. However, it seems like a decent number of people had to do a bit more work than that. 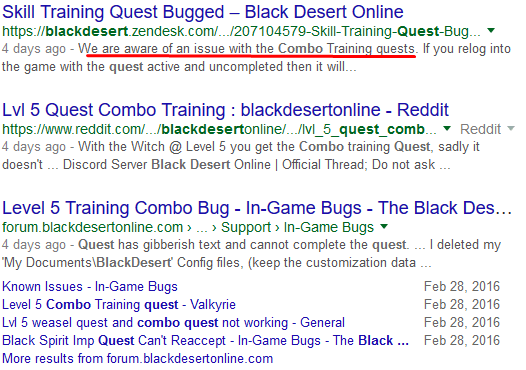 I’m not the only one that had the bug.

2) Broken map. – Many people were unable to open the map, including myself. It wasn’t until a random moment – sometime after I had entered Velia – that I was able to open my map. Even then, the spam in Area chat was constantly mentioning the broken map. Eventually, word got out that the /reloadui command along with one or two other tricks could get it to work again. I never really thought about it, but I am entirely too dependent on in-game maps nowadays. I almost had a small panic attack when I went to open my map for the first time and nothing happened. I also thought the Cash shop was broken, too, until I realized it was simply disabled. Which brings me to the next point.

3) No Cash shop until actual launch – Along with the pre-order bonus claiming, this was the second biggest wrench in my plans (the first being points number four and five). I personally had prepared to purchase several key items for my progression plan. Well, lo’ and behold, all my planning was thrown out the window. This is one piece of information I wish would have been more easily found before the Early Access. Sure, the game is completely playable without access to the cash shop, and the items I wanted to buy were purely for convenience, but it was still kind of annoying. But, in the end, I feel I have to thank Daum for giving everyone a fair start. Well, almost… My next two points will explain what I mean. 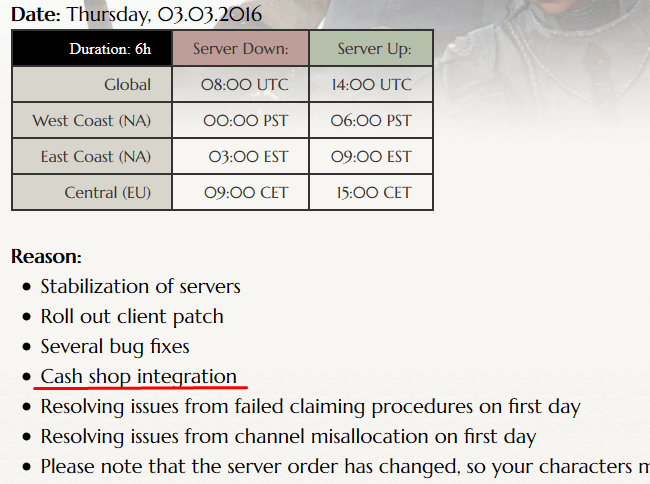 As you can see, it was added on the 3rd.

4) Requiring individual claiming of pre-order bonuses via the website, and then taking hours to get the items to the players. I didn’t receive my items until well after twenty hours after I had claimed them on the website. In the end, the issue was resolved and everyone had to re-claim their items. Well, almost resolved. See, it still took over twenty hours for me (and thousands of others) to get their items. And a decent portion of players found that they would absolutely not be able to receive their items until after the six or more hour maintenance that happened on the 3rd.

Each time you have to choose a region, a server, and (in the case of costumes) a class to claim for. They also appear to be restricted to a single character/server… so one-time use only.

Generally, I wouldn’t mind it. It would be fun if everyone starts on the same exact footing with no special buffs from costumes or pets to do their looting for them. But some people got their items well before everyone else. Having that experience boost from the armor and the tier-five horse is a huge boost to your ability to get around to do quests and grind. And there was nothing more depressing than seeing someone zoom pass you on a tier five horse while you’re putting around on your shoddy tier-one horse you bought from the Horse Stable. Well, almost. You see…

5) While some of us got nothing, others got multiples of the rewards. Players with tier two or higher hawks have been spotted, others claim to have received double or triples of other rewards. There’s been screenshots of people with multiple hawks flying around them within an hour or so of the server opening; just head over to the Reddit or forums for proof. This kind of mishap with the Conqueror’s Pack items is impossible to fix, so Daum will have to work over time to figure out a way to appease the player-base. All I can say is good luck. 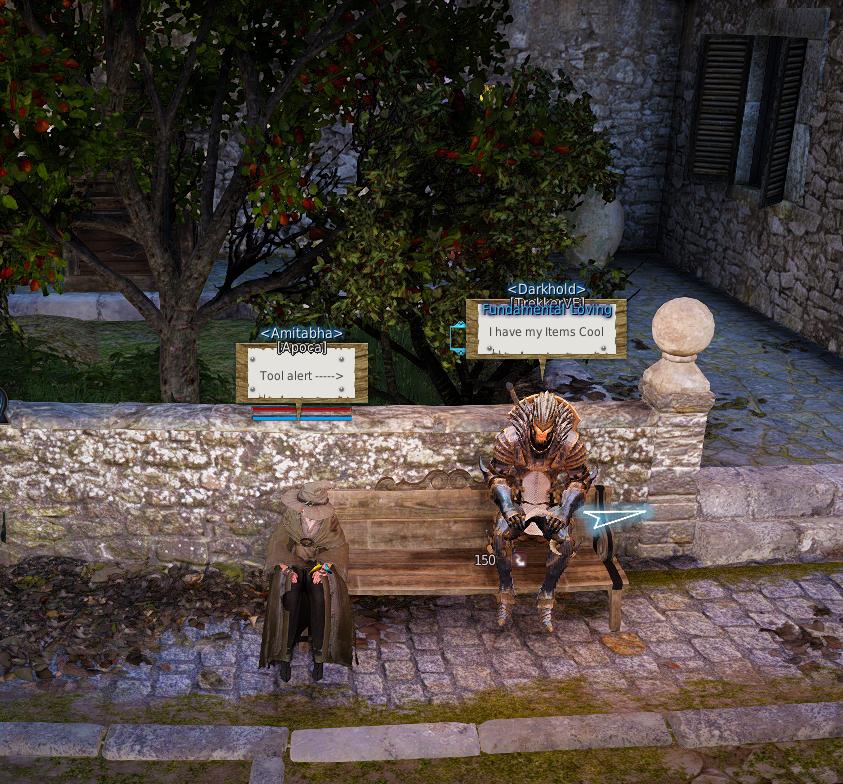 6) What server am I on? Many that logged during the first hours of the game may have found themselves forced onto the wrong server. This appears to have been limited to those on the Edan server who tried to connect to the Serendia 1 channel, but details are a bit murky when you take into account what players claim as opposed to what Daum has admitted. This issue was referred to as NA Server Character Placement Issue by the Daum team. Even now, a few days later, players are still incredibly angry over this. It’s gotten to the point where players are getting banned for discussing the issue too vehemently. 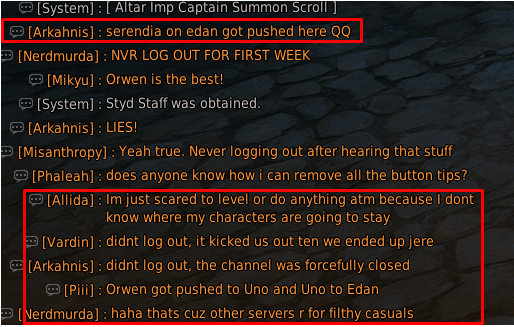 Imagine this, but non-stop for the first several hours of the game.

But let’s not focus entirely on what went wrong. There are two things that the Daum Europe team accomplished that made the early access quite nice. First, this was by far the most stable launch I’ve experienced with a pre-order MMO in recent times. Sure, the first fifteen minutes were a bit rough, but after that, everyone I knew (and saw on Twitch) was able to log in and play just fine for the most part. And second, they increased the spawning rate of the early mobs to deal with the first waves of players. Nothing is more annoying at a game launch than having to fight with thousands of other players to get one or two kills needed for early quests. And from my experience in the alpha and beta, I can say that the increased spawn rate was needed. What could have been an annoying fifteen minutes trying to find and kill a small number of starting zone mobs turned into a quick in-and-out experience.

This article may seem like I’m disappointed with the launch, but I’m not. Like I said, this is one of the smoothest launches I’ve experienced in recent years. The simple fact that I could actually play the game – which is what I paid $100 to do – during my early access period is incredibly pleasing. Could things have gone better? Sure. I mean hell, a decent number of players lost upwards of ten hours from the Early Start they paid for. But organizing something as large scale as an MMO launch is incredibly hard. Just thinking of the scale is mind boggling. While others may find it hard to forgive, I find that I certainly can, and I look forward to playing Black Desert for many months to come.

Keep an eye out in the coming weeks for my full and detailed review.