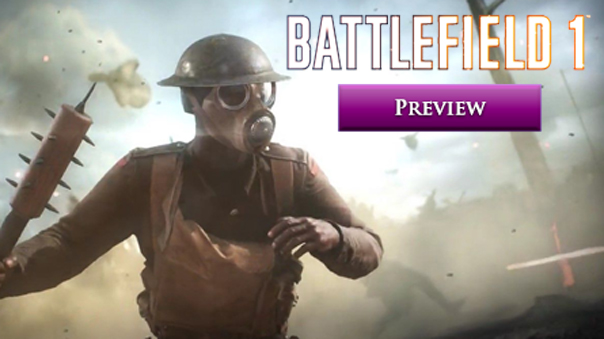 The last Battlefield game I played was Battlefield: Bad Company 2 so it has been a while since I’ve stepped back into the Battlefield universe. Battlefield 1’s trailer featuring a World War 1 setting made it impossible to resist trying out the game. With the game’s open beta being free for all, I had to jump in and see what it was all about. Read on for my first impressions on the Battlefield 1 Open Beta!

Following the trend of odd naming schemes, the latest installment of Battlefield jumps back to being known as Battlefield 1. Digging deeper into the name, the 1 makes more sense after finding out that this game is set during World War 1. Even so, the 14th installment in the series being named Battlefield 1 is a bit odd. Fortunately, this does not matter too much as the Battlefield name is already well known; an odd name is not going to turn off players.

The menu interface looks quite nice

It doesn’t matter how creative or not the name is if the gameplay isn’t any good. Fortunately, Battlefield 1 is quite fun to play. From what I can remember, the game still feels like your traditional Battlefield game, at least from the perspective of a casual Battlefield player. I am sure veterans of the series will have a lot more to say about how well this game represents the series but as far as I am concerned, Battlefield 1 feels like the latest evolution of core Battlefield mechanics: it has vehicles, large maps, large scale battles, class based loadout systems, and a Conquest game mode.

For those new to the series, Battlefield’s traditional Conquest game mode consists of a large scale battle on a massive map. 64 players on two teams fight with hopes of capturing and holding various control points. The longer you hold these points, the more points your team accumulates. With such a large number of players on a massive map, communication is essential towards success. For this reason, your team is split up into smaller squads allowing for smaller groups to coordinate with each other. It would be impossible to get 32 players on your team following the same orders but a squad of five people is much more manageable.

Unfortunately, even with this squad system, unless you have a premade group or get very lucky, you will still be playing by yourself. Like most online games, people tend to keep to themselves and do their own thing. As a result, large scale battles often turn into random small battles enveloped in chaos. For this reason, Battlefield usually sounds good to me in theory but is not as fun when I jump into the game. Like games such as ARMA, the game has the potential to be a lot of fun but only if you find a nice group of people to play with. I highly recommend playing the game with a premade squad, or at least one other person, as doing so will lead to a much better experience. With these massive maps, it is essential that you move together towards the same objective or else your precious travel time is wasted as you repeatedly get a one way ticket to the respawn screen as soon as you get in range of doing anything meaningful.

Aside from allowing respawns on top of squad members, various vehicles such as tanks, airplanes, and horses are available to both add some flavor to the game and reduce travel time. There are a limited number of vehicles available at each point making it essential that they are used to their fullest. Seeing a tank run around doing nothing is a sad sight to see. I personally love galloping around on a horse and cutting people down with a sword.

You can ride horses!

While large scale battles in the Conquest mode offer the traditional Battlefield experience, sometimes it’s nice to kick back and relax with some fast paced smaller scale action. This is where the Rush game mode comes in. Rather than 64 players battling to capture and hold points, 24 players work to either attack or defend control points. While hardcore fans will mostly be playing the traditional game mode, it’s nice to have another option for more casual players like myself. Rush forces both sides onto specific areas ensuring constant action. The attackers work to plant bombs while defenders fight off attackers by killing enemies and defusing planted bombs. Once a point has been captured, the defenders fall back while the attackers push towards new attack points. I found myself playing Rush more than Conquest in the open beta as it let me quickly jump into the action, but I feel like I may have favored Conquest more if I had a group to play with: large scale battles are always more fun with a premade group communicating and strategizing as a team.

Moving on from the gameplay, I found the beta to be surprisingly well optimized. I came into the game expecting laggy servers and choppy framerates but DICE has gone out of their way to ensure that even their open beta provides a pleasant gameplay experience. The game does not feel like a beta game; it feels like a demo of the full game.

All classes offer unique equipment such as Support’s trip mine

Even at maximum settings, the game runs very smoothly. The single map offered in the beta looks quite good but, being a desert, it’s nothing breathtaking. However, the environment truly does feel like a war. Often times we see games where you are supposed to be in a battle but it feels like you’re taking a stroll through the park. This is not the case with Battlefield; the visuals and sound come together to fully immerse the player in a real battlefield. You hear explosions going off in the distance, planes zooming overhead, and tanks slowly creeping towards you. This is the most battlefield Battlefield has ever offered.

Conclusion: A great peek at what is to come

Aside from the Conquest and Rush game modes on a single map, additional content is locked in the open beta. I personally like playing Battlefield games for their campaign and stick with games such as Counter Strike and Overwatch for my multiplayer experience. From the little I have been able to play of Battlefield 1, it shows a lot of promise. I will likely pick up the game in the far future but only for its single player gameplay. I’m more a fan of smaller more fast paced shooters but players who favor strategy and teamwork will come to love the latest installment of Battlefield.

The World War 1 setting is great to see as, while modern weapons are cool, it’s nice to jump into combat with some old school weapons that haven’t been touched on by 200+ games at this point. These weapons may not be as destructive as the ones we have available today but I always find myself enjoying them more in games. Simpler weapons just feel nicer to use, but it’s hard to explain why.

I’m looking forward to the game’s full release, see you all on the Battlefield!