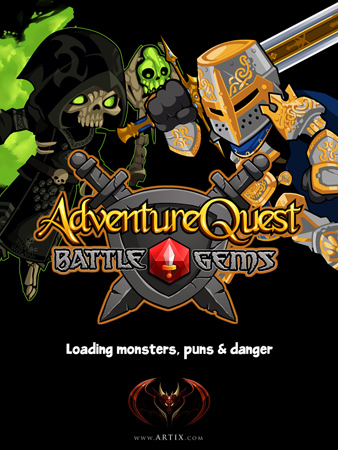 We’ve had the opportunity to get some early test time on the just released Artix match-three title, Adventure Quest: Battle Gems and I must say that the game has proven to be an enjoyable romp into the alternate world of the very crazy and zany world of Adventure Quest.

Similar to a lot of match-three games, Battle Gems uses four types of tiles such as the potion, weapon attack, magic attack and minion attack tiles. You have to connect at least three of them to be able to let your character attack. Higher combos mean higher damage.

The test build I was able to play only had the solo mission mode where game progression is determined by a series of quests where you need to take down a specific monster, and sometimes a specific amount of a series of monsters to progress through.
Your character has stats that will be upgraded as you level up and they can be upgraded through purchasing weapons and equipment which I’ll elaborate more on later.

Each successful quest will also provide your character and your minion activatable abilities during the battle phase. These abilities are random but mostly consist of various magic abilities, weapon skills, minion abilities and potion-related attacks. These abilities and skills are upgraded per quest and can be accessed as you activate these attacks on the board.
Monster Types

The game’s website (http://battlegems.artix.com/), shares that the game has around 100 “twisted” monsters that hail from various mythological origins combined with Internet pop-culture. So you have monsters like the infamous forum trolls, different dragons and even some homage to old movies such as the monster named, Audry III from Little Shop of Horrors. There’s even a black and white themed enemy named Darth Hater, who’s carrying a bright red sword, similar to Star War’s well, Darth Vader.

Some monsters also take jabs at some cultural and game nuances like Jamall Tyrone Fisher, Redneck Ninj-uh and even Greedy Assassin that looks highly similar to the main characters in the Assassin Creed titles.

Facing these monsters are oftentimes humorous since the pre-battle stages build their personality through a wisecrack or two. Some of the battle descriptions are also funny but the humor can get a little too over the top that it tends to strain the joke a little too thin.
Some of the monsters you’ll be facing will have specific immunities that will make specific attacks useless.

Battle Gems has tons of armor and other equipment that you can purchase from the various stores littered all throughout the game. You can purchase them through the gold earned from quests. The equipment you buy is thematic in nature that sometimes they would make you look ridiculous or cool, depending on your preference.

Currently the areas you can equip on your character are the head, body and back, while you can buy minions and weapons that you’ll be using for your offensive attacks. Each equipment bought can add stats to your life, physical, magic, potion and minion attacks.
The minions you can buy are also thematic in nature. Some purchasable pets are the standard fare, some like the monsters you’re facing are taken from popular internet pariahs such as the infamous Flappy Bird (Yes, it lives).

The stages you play in Battle Gems use the typical tile-board based system you can often find in other match-three titles. The board in Battle Gems is a 7×6 board that puts in a random mix of tiles per match. However, some stages will have obstacles in place that come in either slimes or “locked” tiles.

Slimes work as a debuffer and whenever you finish through a combination, it lessens the total attack damage you’ll do against the monster. Some stages on the other hand have locked tiles on the game that unlocks whenever you do a successful combination with the locked tile in the vicinity.

However, it’s not that the game is all out against you since there are some stage elements that can help you in battles. Skull tiles are randomly placed in the board that provides you with more damage on successfully combined tiles. They also cause large explosions in the board that allows the game to provide you with more options and tiles that you can use to further damage the monster you’re facing.

What I think…. so far

Adventure Quest: Battle Gems is a fun game to play and considering the amount of match-three titles out right now, Battle Gems has the parodic match-three title down. While I was only able to play the test build, I’ve been told that there will be PvP once the game is live on the iOS app store.

The game is enjoyable and fun to play even with all the quips and bad puns being thrown at you from the start. The gameplay is linear but the game is challenging enough that it indirectly makes you play the game continuously.
One of the things that I noticed in the game however is in later stages of the game, the equipment you buy will only be for show since you are at the mercy of the tiles that will be given to you upon the battle phase. Regardless of how strong your equipment becomes, if the tiles you get suck, then you’re pretty much done for that match. But then, Battle Gems or match-three games are just like card games in general; the randomness factor of what you need and what you have is one of the genre’s main obstacles that you’ll be facing. Without the frustration and dynamic situations that force you to think each move out carefully, the game wouldn’t have the replayability it does. 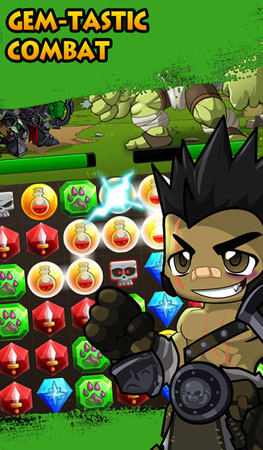 Overall, I can say that I enjoyed my romp with Adventure Quest: Battle Gems and I’m totally looking forward for trying the now released game via the iOS app store.