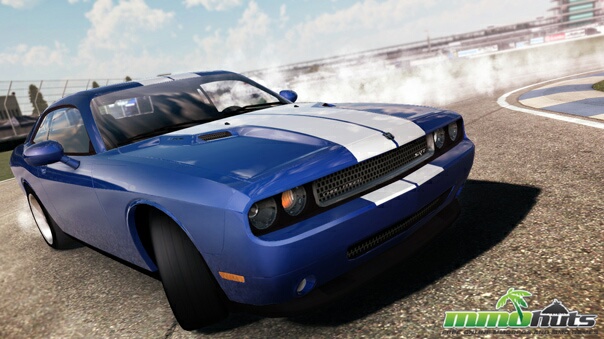 I have always been a fan of racing games, but I never became enthralled with one for a long period of time. For years I had been wanting to set up a racing wheel, pedals, and a clutch for a proper racing game experience. Yet I just couldn’t justify the expenditure when there wasn’t a game in mind I would be using it on for a good length of time. That is until recently due to being occupied by other games and school. With a bit more free time on my hands, I have found a new love of serious racing titles utilizing my Logitech G27. It is much more difficult than racing with a controller or keyboard but it is so much more fun. Upon discovering Auto Club Revolution, a free to play racing game by Eutechnyx, I couldn’t wait to obtain access to the game’s beta. Read on for my first impressions on the Auto Club Revolution (ACR) beta.

ACR is a racing game with MMO elements. Unlike Project Cars that I reviewed last week, you can’t simply log-in to ACR, and choose any car or race. Instead things start simple with profile creation, before you enter the RPG elements of leveling your account up, researching cars, purchasing cars, and work your way up the leaderboards. The game has a lot to do for fans of racing games, but it is by no means a realistic simulation. This is classic arcade action modernized. This is not a bad thing, it just targets a different audience.

For the ACR beta, I was given a randomly generated username and password. I assumed this would be my racer’s name that would be displayed to other players. However, when I first logged in I was asked to create my profile. There are limited options for customizing your racer since you can only choose a unique name and select from the given avatar pictures. This is completely acceptable for a racing game as the customizability of cars matters much more than the actual driver. 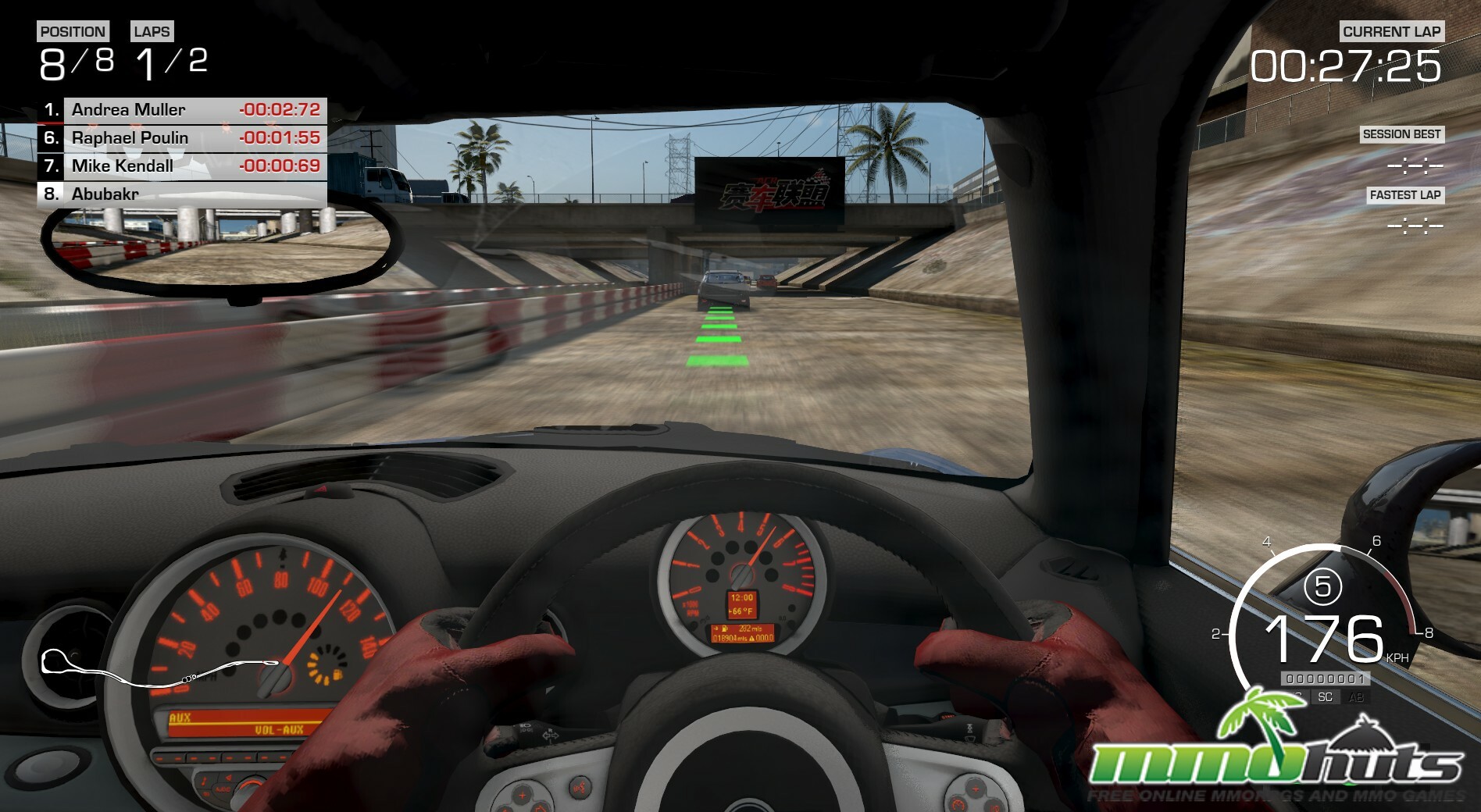 The interior view is awesome.

When it comes to customization of cars, the team behind ACR has done a great job and provided players with many options. There are cars available from different regions: North America, Europe, and Asia. All of these cars can be found in the real world which is a big plus for car and racing fans. It always feels better to be able to drive cars you’ve seen on the road, on TV, or in your dreams in games. In the beta there are a decent number of cars available from all three of these regions. Additional cars should be added as the game is further developed.

Being an MMO, players have to work to unlock these cars. Auto Club Revolution uses a car tree system where players have to research and purchase cars from different tiers. There are two types of experience points, free EXP is used to research cars while car EXP is used to upgrade your cars. Once a car has been researched, you may purchase the car using credits. Both credits and EXP are earned by simply playing the game. You can race online, with AI, or even do practice laps for credits and EXP.

As mentioned above, each car you purchase can be upgraded using car and free EXP. Car EXP is gained for each car by racing with that car. You cannot directly use one car’s EXP for another car. Every car starts off with some base stats which can be improved upon to suit the player’s needs. Depending on how you play, you can bump up your top speed, acceleration, handling, and many other stats for your car. One mistake new players make is always going for the cars with the highest horsepower or speed. Not all tracks favor maximum speed driving, and it is important to take the other stats into account to build a diversified garage. Plus the tracks that do offer long straightaways still tend to have some sharp turns, and a fast bulky car that can’t turn still isn’t going to be winning many races. 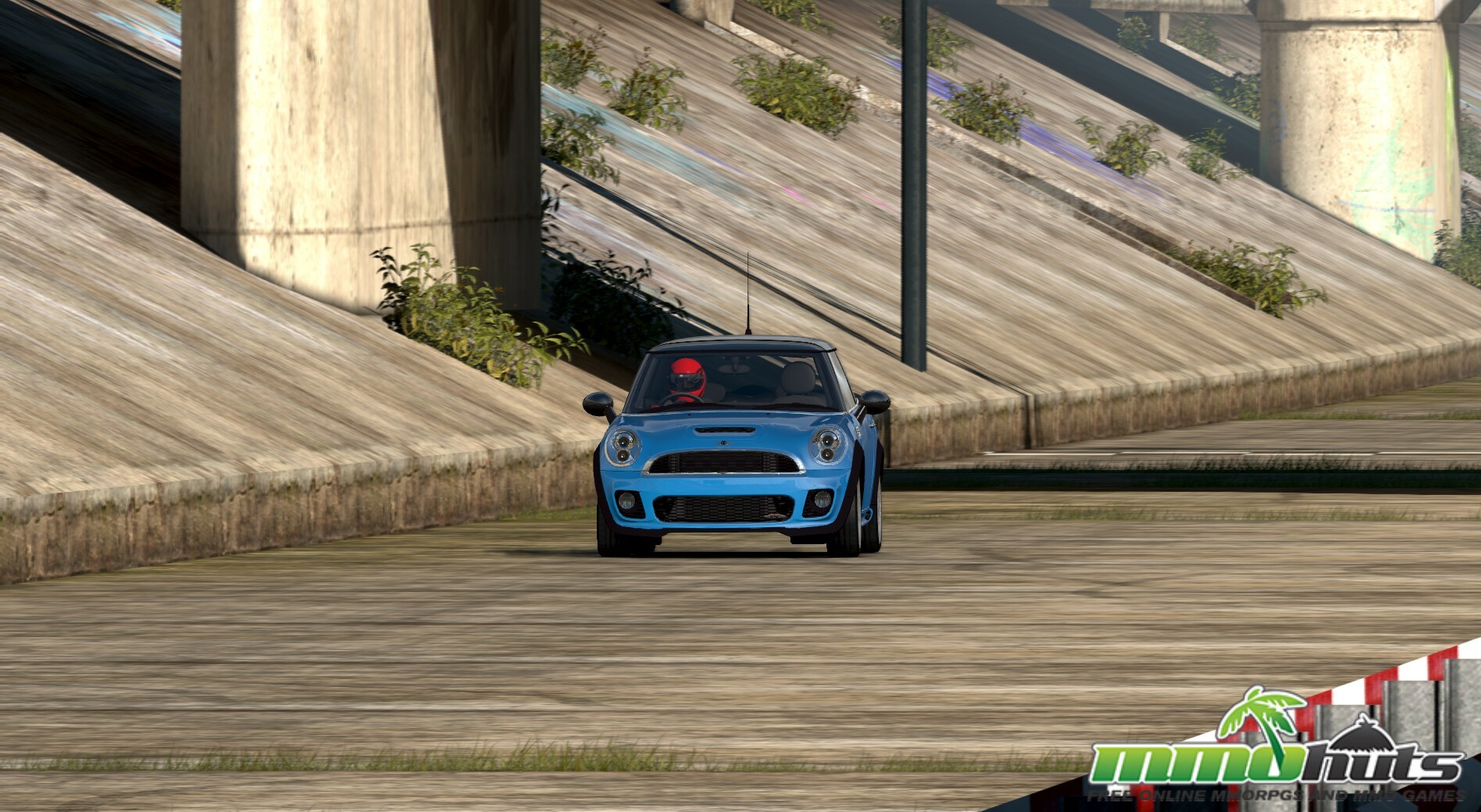 Although I purchased a Corvette, I still found myself driving the Mini Cooper.

Being a racing MMO, your cars are unique and locked to your account. This means that if they get damaged during a race, they will remain damaged for all races until you repair them. I am personally not a big fan of this repair system, we play racing games for fun and accidents do happen. If you don’t have enough credits saved up you might be stuck racing with damaged vehicles throwing a painful part of the simulation world into an overall arcade racing game.

Additional customization is also available for cars. Players can paint their cars, change the rims, and add drift charms which hang at the back of the car. Only some basic colors are available for free and the rest of the cosmetic options must be purchased with EBucks, the premium currency. This is fine, it is never bad to have cosmetics being sold for real money. However, there are also premium cars available for purchase with only EBucks. There are cars on the same level as the premium cars available for EXP and Credits, but they are quite expensive. It is hard to comment on the balance of these cars as EBucks are not sold in the beta, though all players were given some EBucks for free. One method of balancing the free and premium cars would be to require researching as well as EBucks to unlock premium cars. Since as it currently stands, those willing to open their wallets get a fast track to glorious rides with no work at all.

Moving on from cars, the race tracks offered in ACR are also based on real tracks. Once again, like the cars, this is a huge plus for the game. Fans of racing love to see cars and tracks found in the real world. There are a good number of tracks to choose between, you can choose long tracks, short tracks or loopy tracks. Like the cars, it is likely that additional tracks will be added in the future. I just hope that all tracks are available for free. It would really suck to have premium tracks that are locked for some players. 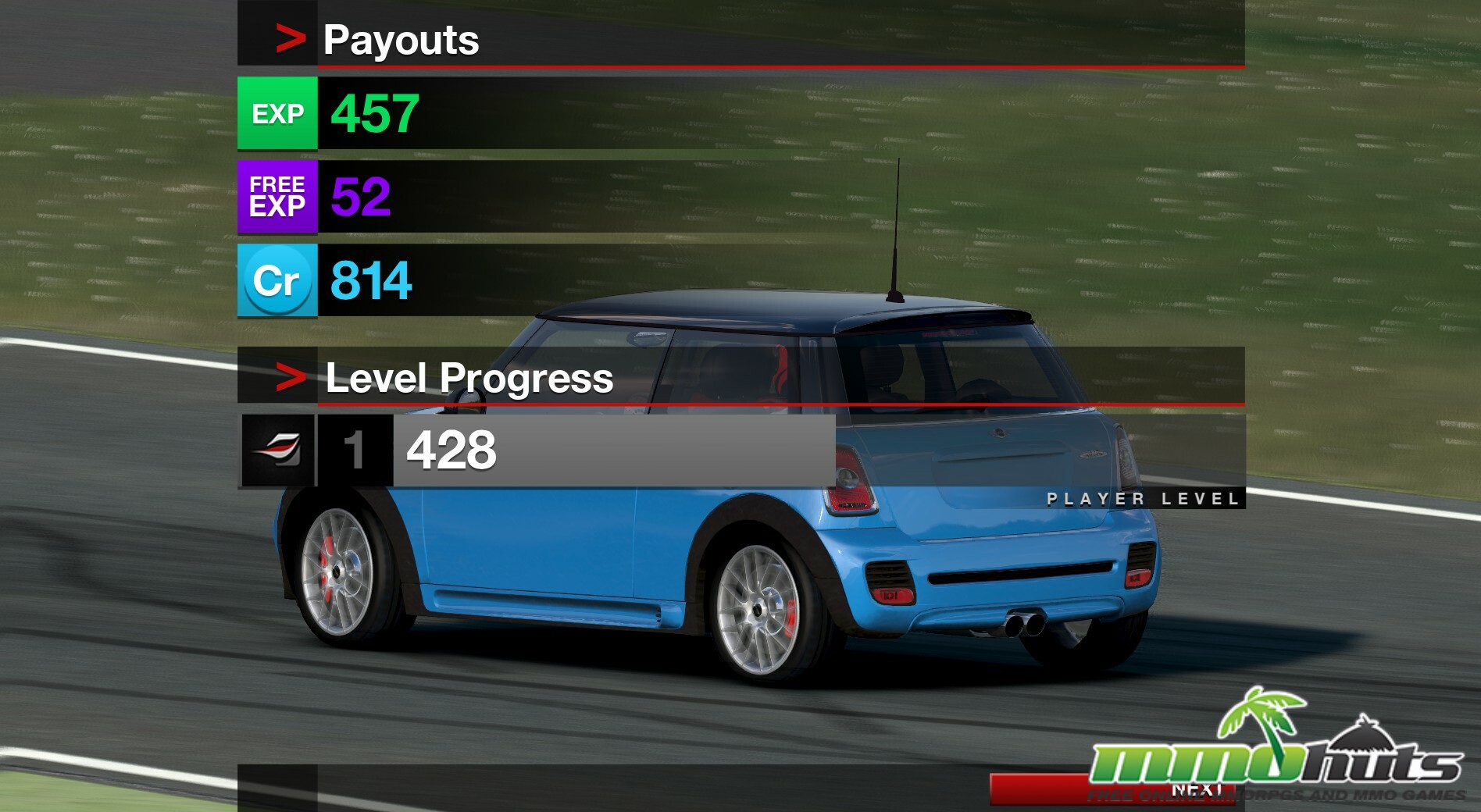 Alongside earning EXP and Credits, you can also level up your profile.

So far, the game is not bad if we look at the offered features. For racing games, offering good controls is the most important feature. Unfortunately, ACR is found to be lacking in this department. In the beta, you can race with your keyboard, a controller, and even a racing wheel. The problem is that using a controller and racing wheel ends up feeling the same as racing with a keyboard. Beyond the clunky controls, there is also no force feedback on my racing wheel and even my Xbox controller doesn’t vibrate. If I purchase a high quality racing wheel, I expect games that support it to make full use of it’s features. Hopefully this is addressed after the beta as solid controls can make ACR a great racing game. 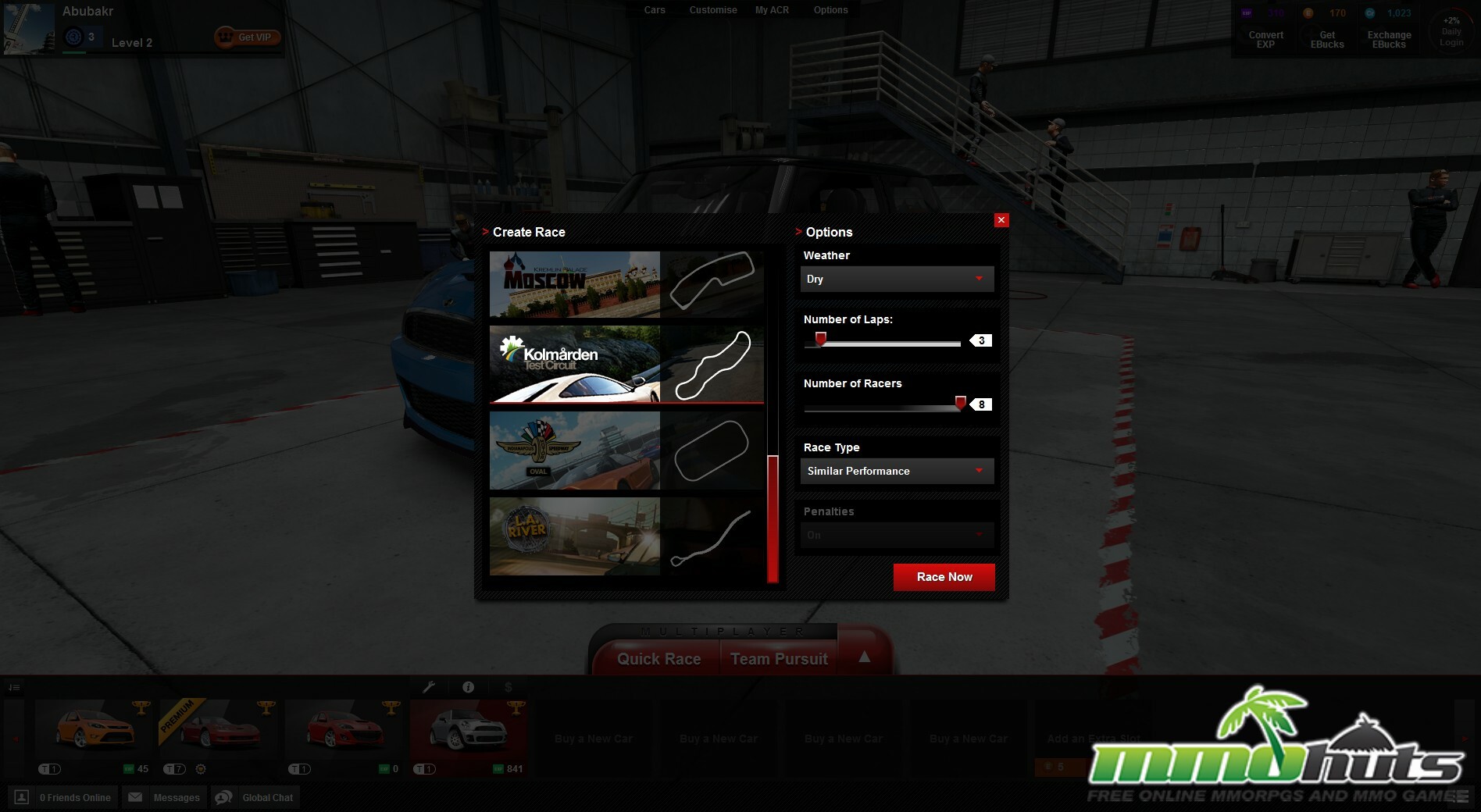 ACR looks pretty promising for a F2P racing MMO. When starting up the game, I did not expect a game on par with the best simulators such as Project Cars and Assetto Corsa. If you play the game with this mindset, and if the controls are fixed after the beta, ACR could be a great racing game to play if you do not want to get into the more realistic racing simulators but still compete with others online. The visuals are smooth, the interface is quite nice, and overall the gameplay satisfies. If the developers work on fixing the controls to make it feel like I’m actually driving a car, ACR could become a great F2P racing MMO.

Graphics: 3/5
The graphics in ACR are quite good, especially for a F2P game. The cars and tracks meld well together, though the environment needs some touch up work to meet the standards of the rest of the game. Overall, you won’t be disappointed with the game’s graphics if you don’t expect the graphics to be on par with AAA racing titles.

Control: 2/5
While I am optimistic that the controls will be improved after the beta, the controls in the ACR beta are not very good. Even if I use my steering wheel, it still feels like I am playing with a controller or keyboard due to the lack of force feedback. The wheel turns like an analog stick where not even a full rotation is needed to turn the wheels completely. I miss the feeling of having to fight with the wheel when losing control, I can’t just feel which way my car is going. I really hope these issues are addressed after the beta.

Features: 4/5
Everything you would expect from a racing game is available in ACR. It would be nice to see something unique to ACR to separate it from other F2P racing games on the market.

Customization: 3/5
There are a lot of customization options available for players. You can upgrade your car, paint your car, change the rims, and even add drift charms. I only wish to see more options for free players when it comes to cosmetics. Even a simple method of obtaining premium currency with free currency would fix this issue.

Community: 3/5
In the beta stages it is hard to judge the community. When playing online, I haven’t been able to fill up a game but it is rare to find closed betas packed at all times. The developers are doing a good job with community events in the beta, awarding players with EBucks for completing challenges and allowing them to race with developers. I hope these events continue after the beta.