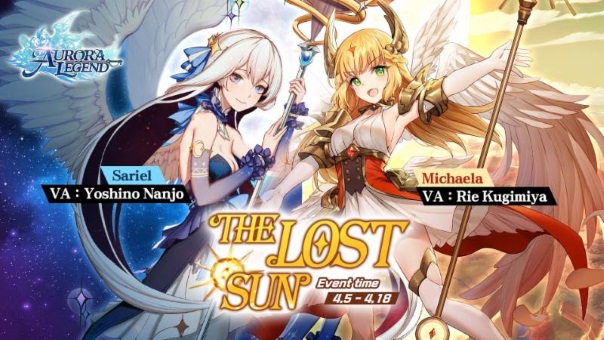 Rastar Games is proud to announce that their adventure title on mobile, Aurora Legend is receiving its first update today. This is coupled with a new event that begins on April 5th, 2019. Starting today, players can use Master Craft to create high-tier runes and reset their heroes levels with Recall. Hyper Mode lets battle and movements go up to x3 speed, and Auto Craft will let players craft up to runes up to 50 times in one go.

The Lost Sun Major Event commences on April 5th and will last until April 18th, 2019. The energy of the sun will increase the closer Aurora gets to the start of the summer. However, one day, the sun completely disappears from the sky, leaving Aurora to fall to darkness and chaos. It’s at this time that a mysterious guest visits the Adventurers Association of Messiah, claiming to have clues as to why this event happened. During the event period, two new exclusive heroes can be acquired: Michaela and Vegilriel.  During the April 5th week, the three-star tank Michaela (voiced by Rie Kugimiya) can be earned, while support and buffer specialist Vegilriel (voiced by Yoshino Nanjō) can be earned the week of April 12th. New skins for both Vivian and Michaela are also available to earn during The Lost Sun Major Event.