Welcome to the world of Aura Kingdom Online. Published by Aeria Games this anime inspired mmorpg blends a fantasy world with anime graphics and does it very well. With a very fluid combat system, a diverse skill tree and a different take on the pet system, Aura Kingdom should satisify players who have been craving that anime type mmorpg.

Your journey in Aura Kingdom starts off as you are thrust into what seems to be a battle between humans and demons. Your first task is to defeat the boss that threatens the lives of those around you. It’s fairly easy to do so since your level is much higher than a beginner and the main character’s equipment is much better then what you would usually start off with.

After defeating the demon you wake up in the starting town feeling a bit dizzy. Was it a dream..or reality? Only time will tell as you progress through the storyline.

I was very surprised with not only the options in character creation but, most importantly, the amount of classes Aura Kingdom has. There’s a total of eight classes and a ninth class that has yet to be released. These classes include Guardian, Duelist, Ravagar, Wizard, Sorcerer, Bard, Grenadier and Gunslinger. After selecting your class, I choose a Duelist, you can then customize the style of your character. Aura Kingdom provides you with a bit more options then usual to help distinguish yourself from other players. While creating your character you have ten different hair options and nine different face options. I was a little surprised that we didn’t have the option to make our character taller, shorter and skinny or large as well but, to me, it’s not a huge flaw as usually there’s reasoning behind it. After picking your hair color and eye color you are then taken to the Eidolon selection screen. I’ll talk about this in greater detail later in the article. 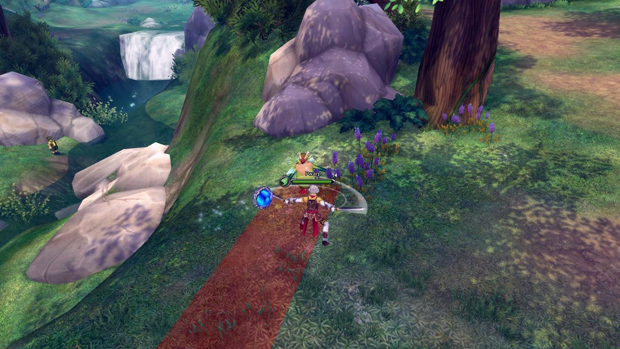 Aura Kingdom uses the standard keyboard and mouse control scheme. You can move around with the w,a,s, and d keys or, if you choose, you can left click on the ground. You can rotate the camera using q and e and also holding down the right mouse button. All of the controls seemed very responsive and fluid.

Aura Kingdom starts off just like most mmorpg games today. You are asked to talk to the villagers and help them with various tasks around the village.

Doing so helps you familiarize yourself with Aura Kingdom’s controls and auto path system, which I found very helpful and rarely buggy. Combat in Aura Kingdom is extremely fluid. Not only can you move around while attacking, but you can also use your jump while executing moves and even glide and attack your opponents which will really open up some strategic possibilities once you are able to enter PvP. Skills and attacks are used like most games out today with 1-9 and Control+1-9 activating your abilities and a separate hotbar for your Eidolons attack if you wish to manually activate their abilities (by default they are set to automatically use their skills). Monsters also have attacks of their own and, to help make the game less static, monsters’ special skills will show with a red indicator on the ground, allowing you time to dodge them to avoid taking any damage. This gives the battle system a more action type feel as those who don’t bother playing reactively in dungeons will either get decimated or give their healer a massive headache.

Leveling in Aura Kingdom seems to be pretty solid. I’m not sure if the exp is increased during Closed Beta or not but I noticed that I leveled up fairly fast. Hopefully it will stay close to where it’s at now as a lot of players experienced in the Taiwanese version have said endgame is the best part.

Early on, you get access to your first mount, an Ostrich. This helps you move along the map a lot faster. Some people might wonder why you need a mount when you can just glide (which is faster) but the reasoning behind this is the autopath system. You can’t auto glide but with your mount you can auto move a lot faster. That and many regions have pretty steep hills that aren’t too glide friendly.

Don’t be shy, be Social!

Aura Kingdom offers many social options if you wish to use them. There’s plenty of emotes and different types of waves and greetings you can use to socialize with fellow players and friends.

Not only can you customize your greeting when your friends see you online but you can also edit what you say after you win a duel.

Aura Kingdom provides a fairly nice stat system compared to the auto stat system a lot of games use. Instead of choosing your stats for you, you have various options for placing both offensive and defensive points. In the Offense tree you have Damage, Critical Chance and Speed. Damage increases how much damage you do to an enemy, Critical Chance gives you a better chance to critically hit your opponent, and Speed decreases your skill cooldowns and also increases your movement speed. On the other hand you have the Defense stats which include HP, Defense and Evasion. HP determines how many Hit Points you have, Evasion determines how well you can dodge attacks, and Defense makes you stronger so attacks that damage you will do less damage.

Not this time! Instead of the standard skill tree, in Aura Kingdom you get a giant square called “The Envoy’s Path”. The Envoy Path allows your character to advance in the way you choose which leads to you creating the type of character you want to play. You don’t have to follow a certain path and you are free to customize your character the way you want. This helps make each and every player unique regardless of class and stat points.

The Eidolon System in Aura Kingdom is an advanced form of a pet system used in most mmorpgs today. You start off in character select choosing one of four Eidolons that will help you along your journey. I started with the more human like Eidolon mainly because I thought he looked the best and seemed to fit my playstyle. That’s right, the Eidolon’s aren’t just for show. They come packed with their own abilities and will be able to help you in battle. After you progress a bit through the beginning storyline you find yourself feeling ill. As a healer attempts to heal you, a mysterious orb appears next to you. This orb will eventually turn into your Eidolon, sealing your fate as an Envoy of Gaia. 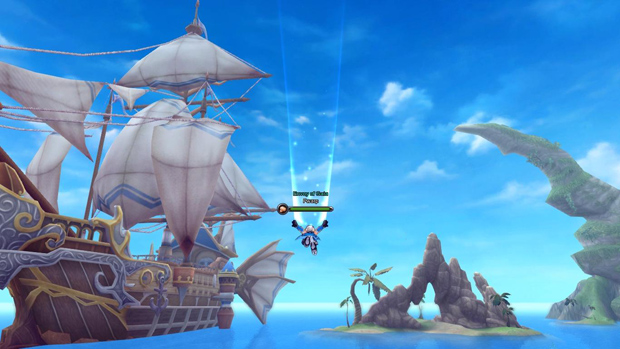 You can also use special skills that will combine an attack with both you and your Eidolon. Stylized cutscenes typically accompany these attacks to add style beyond the massive damage they typically unleash. In some rare cases you can even ride your Eidolon as a mount, altering your skill bar to a new set of options.

Knowing that Aura Kingdom is in Closed Beta, I was expecting to find numerous bugs. I was very surprised that there wasn’t to many but I did encounter a few. One of them initially involved my torso disappearing during screenshots (floating arms and legs for the win!). Another bug (I hope it’s a bug) was that when during a storyline cutscene if I had leveled up prior to the scene beginning, the level up icon would remain pasted over my head, breaking immersion pretty harshly. The path finding system was surprisingly very fluid and I only found myself getting caught on a tree or two while auto pathing. In towns it worked flawlessly almost every time.

I believe I can fly!

The gliding system is a very fun feature in Aura Kingdom. After jumping into the air you simply hit R to glide around the map. I found myself having a lot of fun just gliding around town and in the forest and looking at the beautiful graphics Aura Kingdom has to offer.

Aura Kingdom offers a unique Anime type MMORPG that many fans of this genre have been waiting for. It doesn’t offer many new features but the features it has are polished and make it easy for new players who are new to the genre to jump right into the action. It seems XLegend has moved quickly squashing bugs in their limited Taiwanese release as the localized version is almost perfect, and the small bugs still existing should be simple to iron out before open beta. All in all I would say that this is the game that the Anime fans have been waiting for and even those who are just tired of low quality mmorpgs will find Aura Kingdom a breath of fresh air. With fluid combat, many social actions, and a diverse range of classes, I would say that Aura Kingdom sets a high standard for future anime mmorpgs to compete with.