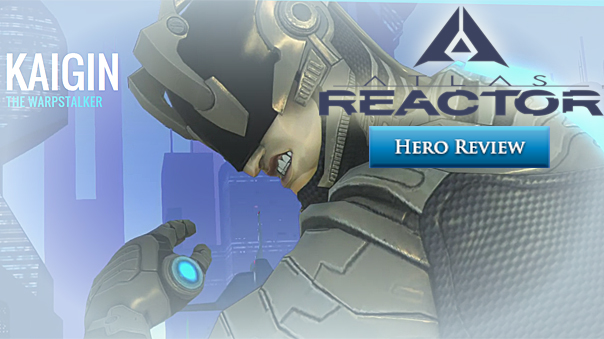 Kaigin the Warpstalker is a deadly and elusive firepower assassin that can solo carry games by unleashing extreme damage while being dodgy enough to almost always escape the counter assault. That’s not to say it’s easy, as reaching his skill cap is going to take some serious knowledge of the Atlas Reactor mechanics.

With multiple dashes, wide high damage melee swings, ranged shurikens, and rewarding all-ins, Kaigin is an ideal choice for the carrying soloQ player. Or is he?

Role
Kaigin is by definition a firepower freelancer, meaning he is expected to do loads of damage while staying alive. However actually doing so is quite difficult on both fronts.

Not dying by itself is obviously important, and while Kaigin is certainly elusive with 2 dashes, a teleport, and stealth, he’s still quite squishy and must get into melee range to get off the big hits. He can be compared to Asana, the frontliner, with a similar look and feel. The major difference is Asana relies on damage negation to just take the hits and shrug it off. Kaigin must evade attacks entirely or he could get 1 turn killed and violently swing the momentum in the enemy’s favor.

So, effectively, Kaigin I believe requires some of the most cunning tactical decision making to make most effective. He needs to hit and run while continually proc’ing marks for maximum damage, but do so with near expert level knowledge of the game and opponent’s potential kit use to make it work. Knowing when to all in while keeping up with predictions and evading death is incredibly difficult with this melee assassin. Should you find a way into the center of a melee though, you will discover Kaigin has the potential to be one of the strongest lancers in the game.

Gameplay Overview
While a significant amount of time is still necessary to render a best course of action, I have discovered two vastly different play styles that have worked well for me.

The first is the obvious when glancing over his profile: he’s an assassin. Generally this has you running around the side going from stealth zone to stealth zone until you either meet someone and focus them down, or using shadowstalker to stealth up again and rush the backline to kill the likes of high priority targets Zuki, Blackburn, Lockwood and so on. Assuming the enemy does have a high priority target like mentioned previously, then this tactic works well enough. Disrupting the enemy’s strategy while also getting a fair amount of damage done is effective, if a bit predictable, and fairly straightforward. Definitely try this style of play first, especially since opponents are likely less capable of reacting appropriately to a diving assassin.

The second playstyle is when your team has a high priority target and are facing several divers like Rask, an enemy Kaigin, Tidus etc. Then, you play somewhat like Asana, except instead of just tanking, you find the first diving enemy and burst them down with your high priority team member. It’s sort of a vanguard role that reacts and shuts down enemy aggression with damage instead of damage negation.

Mods
Generally speaking I don’t like the mod options available. I like the idea of mods, the tweaking of a character to play a specific playstyle, but Kaigin’s options do not assist in that goal. My build looks something like:

Catalysts
For players who frequent the forums this usually remains pretty static. Turtle Tech (give 30 shields for the turn) helps the player survive (especially on a squishy firepower lancer), Shift (teleport a medium distance) gets you out of sticky situations, and Second Wind (Heal 45 HP over 3 turns) heals you back up to join the fight once again.

Essentially these options keep you alive and negate mistakes which everyone is bound to make.

Long Term Viability
Kaigin, like many high skill cap champions, will have an abundance of one trick ponies at every step of the ranked ladder (like Yasuo/Riven from League of Legends). Throw in the fact that he’s a cool cyber ninja and you get another segment of the crowd clamoring for such a stylish, difficult to play, but exceptionally rewarding lancer.

However, whether or not he will actually see success is another question entirely. My guess is no. Kaigin’s skill floor is very high due to being a squishy melee firepower character that must evade attacks entirely to stay alive. Just surviving is difficult, but he still has to do damage. Successfully hitting shurikens and getting reliable melee attacks while balancing mark damage, dashes, and avoiding hits is hard. Much too hard, I think, for most people to see a consistently good winrate.

I don’t doubt some will be able to completely annihilate their opposition, maybe he’ll even see some competitive play (note: I have not yet watched competitive Atlas Reactor), but generally speaking I think he’s too much of a gambit for the average player. Why take the risk of throwing yourself into the action with a diver when Blackburn or Lockwood will usually do as much damage from the safety of a backline and guard cover?

Ryujin No Ken o Kurae!
Every competitive multiplayer game has to have the Kaigin archetype: high damage, elusive mobility, a Japanese inspired style, and a ridiculously high skill floor and skill cap. Although, I’m not complaining. Just stating the obvious.

He’s bound to be annoying both on your team and on the enemy’s due to the inconsistently of play from such a versatile lancer, but one thing’s for sure: he’s a whole lotta fun.