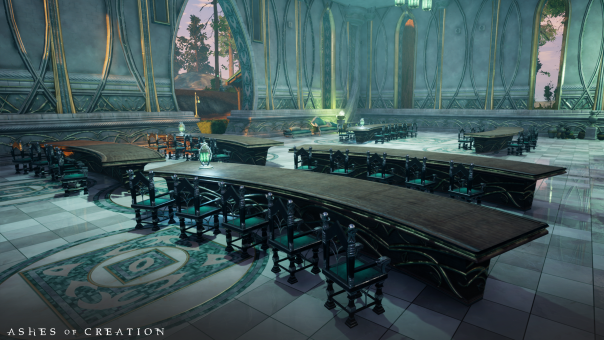 Scientific Nodes in Ashes of Creation are incredibly important, as a Verran philosopher once stated,  “To know the Gods, we must first know ourselves. Science is our looking glass”.  The Ashes of Creation developers released a new blog post today with an incredibly heavy amount of information regarding Science Nodes. While they are just one of many Nodes players can seek out, but today’s dev blog, linked below, will blind readers with Science.

Nodes exist in locations that focuses on the Essence of the world to produce various results. Scientific Node Types are for those who seek knowledge, technological advancement, and want to understand why the world is the way it is. Sprawling questlines await in Scientific Nodes, along with rewards for crafters, gatherers, and those who wish the highest levels of Artisan knowledge. Scholars will be waiting at a Scientific Node, who are on an Expedition in the wilderness. These Scholars need aid in finding reagents for their experiments. If you should choose to help them, you may progress a Scientific Node beyond a lowly Expedition into something magnificent.

Specialization in Artisanship and Construction mechanics are granted through many of the NPC merchants and through the ancillary quest points within the Scientific Node Type. This will unlock abilities within many professions and allow specialization in the Gathering, Processing, and Crafting aspects of the Artisan system.