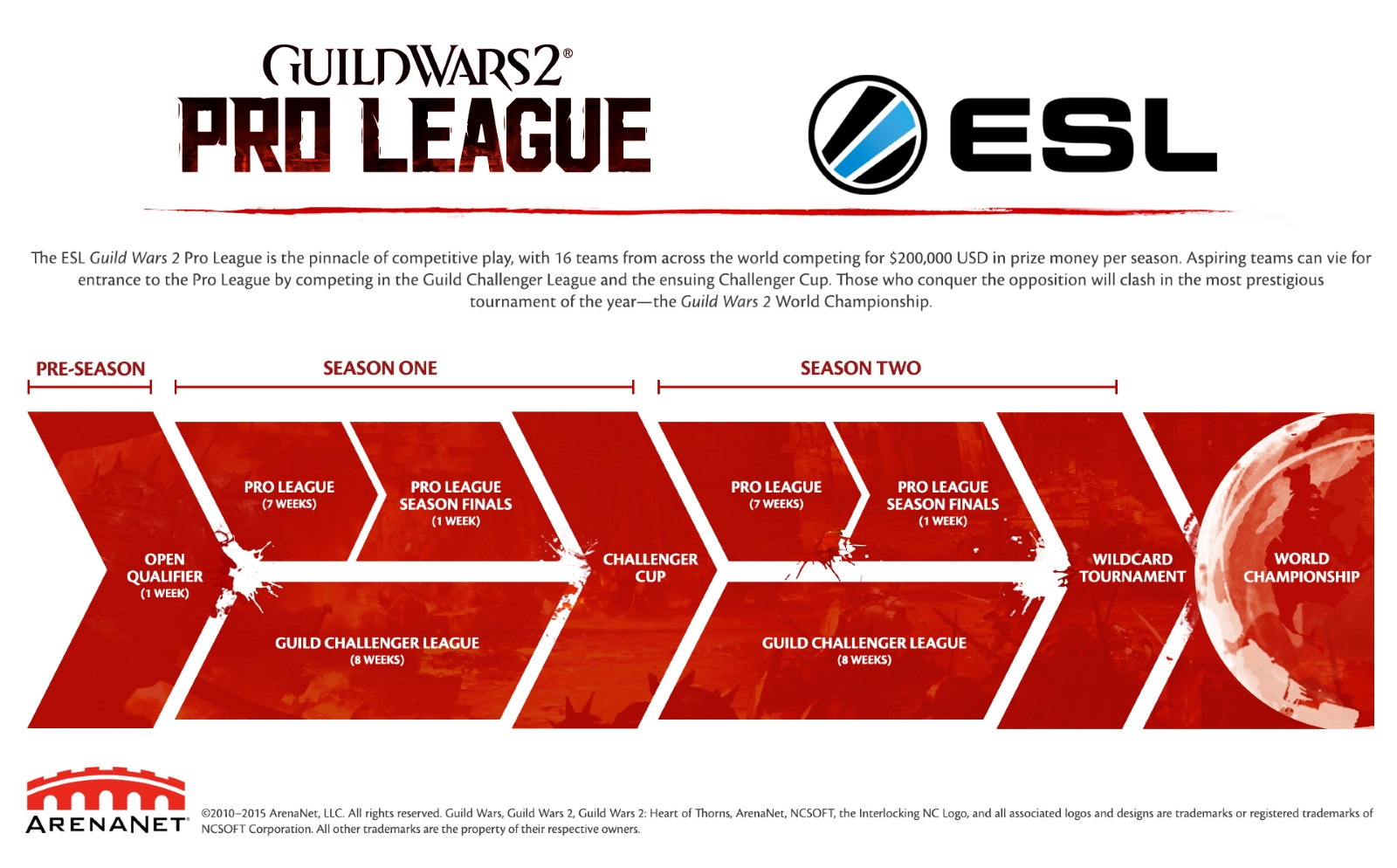 ArenaNet™, publisher and developer of the acclaimed Guild Wars franchise, and ESL, the world’s largest esports company, today announced the ESL Guild Wars 2 Pro League, an all-new tournament series offering $400,000 (USD) in cash prizes. The prize pool, which will be offered over the course of two seasons, is both the largest ever for Guild Wars 2 competitive play and represents one of the biggest cash prizes ever offered by ESL in Pro League competition. The tournament opens up elite competition to the widest group of Guild Wars 2 players ever by lowering age and region restrictions for eligibility.  It’s also open to new players who can now play the core Guild Wars 2 game for free. Guild Wars 2 Pro League kicks off in November with open qualifiers, with the first season slated to culminate in a Season Finals LAN event at ESL studios.

ArenaNet’s move to Pro League is part of the ongoing growth and evolution of Guild Wars 2 competitive play.  The game recently saw record numbers for players participating in PvP.  It’s part of a growth trend overall in the player community since ArenaNet announced Guild Wars 2: Heart of Thorns, the game’s first expansion coming on October 23, and made the core Guild Wars 2 game available to play for free this past August.  The game’s elite competitions had already grown last year with the introduction of the Guild Wars 2 World Tournament Series (WTS), its first global competition where teams from North America, Europe and China vied for US$150,000 over the course of three tournaments held in Beijing, Boston and Cologne.

“We’re seeing massive growth in players joining Guild Wars 2 and competitive play is the fastest growing segment in the game,” said Colin Johanson, Game Director at ArenaNet. “Working with ESL to develop this tournament is a natural next step for us, inviting more players from this growing community to come take their shot at being elite.  Guild Wars 2 Pro League is the result of our vision to create a tournament system where the majority of our player community can participate and are given a clear path to improve their skills, form teams and qualify, giving them a real shot at fame, glory, and big cash prizes.”

Guild Wars 2 Pro League makes elite competition in Guild Wars 2 attainable for the great majority of players, using ESL’s guidelines to lower age restriction to anyone 16 years old and over, and broadening eligibility to all global regions.  ArenaNet has also developed systems within the game’s PvP mode designed to give players a path to pro competition.  In August, ArenaNet used the stage at its last WTS Championships in Cologne to announce the introduction of an in-game system called PvP Leagues coming with Guild Wars 2: Heart of Thorns. It’s a system intended to help beginning and up-and-coming players progress their skills, set goals and earn in-game rewards as they fight their way into higher ranked divisions. The system also introduces leaderboards for guild teams as part of a Guild Challenger League, which will become a feeder system into the new Pro League. At the end of each Pro League season, the bottom ranking teams will have to face off against the top teams from the Guild Challenger League in the Challenger Cup, risking possible removal from competition. The top teams per region from the Challenger Cup will then be promoted into the next season of Pro League.

“ArenaNet’s Guild Wars 2 recently enjoyed record numbers for players participating in PvP competition, and we are confident that the ESL Guild Wars 2 Pro League will help further foster this growth,” said Sebastian Weishaar, Senior VP of International Business at ESL. “At ESL, we’re very excited for what lies in store for the ever-evolving game and look forward to enjoying its high-level competition both online and in our Burbank and Cologne studios.”

Once teams are in the ESL Guild Wars 2 Pro League, eight teams from each region will compete for a combined prize pool of US$400,000 over the course of two seven week seasons. The first season kicks off with qualifiers in mid-November, as an open tournament that will determine four of the eight teams who will compete in the ESL Pro League.  The other four teams will include a mix of World Tournament Series Finalists and the highest ranking teams in the final round of the October Go4GuildWars2 Cups, which will continue to run as weekend tournaments until October 25. The season will ultimately lead up to a Season Finals LAN event at ESL studios featuring the top four teams. All teams who make it to the finals are guaranteed winnings from the US$200,000 prize pool for that season.

For details on the ESL Guild Wars 2 Pro League including official rules and information on eligibility, please visit: http://pro.eslgaming.com/gw2/proleague/news/.