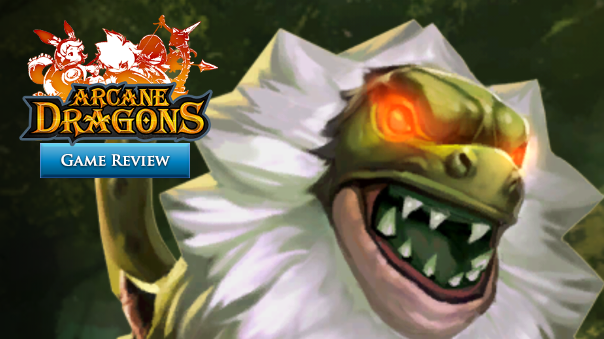 Ever craved a game for your phone that’s more engaging than pushing buttons? Wanted something cute and colorful that wasn’t watered down for casuals? Meet one of the newest contenders in the massive mobile market: Arcane Dragons. Arcane Dragons is a new action RPG for mobile, developed by Snowpopcorn and published by Redbana.

There are three classes to choose from in Arcane Dragons: Warrior, Wizard, and Archer. These classes are pretty straightforward in their approach to combat, with Warrior offering melee attacks, Archer focusing on ranged physical attacks, and Wizard blasting ranged spells.

Classes are relatively balanced for both solo and group play, so there’s no need to fear that by choosing one of the ranged characters that you will be too weak to tackle the story mission. Regardless of your first class choice, you will be able to unlock the other two classes for play with coin. 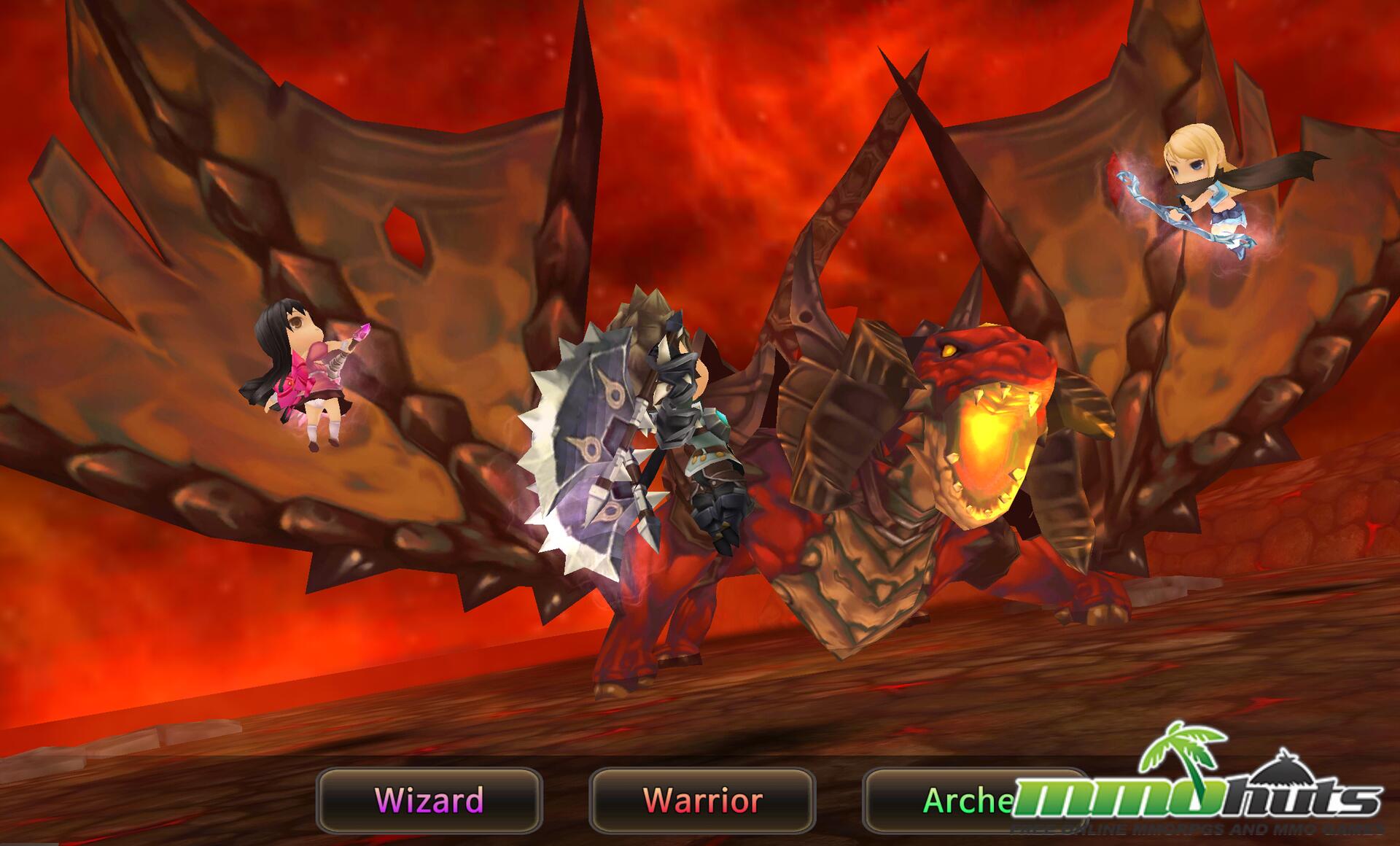 While it is a minor point in mobile MMOs, each class is also gender locked, with Warrior being the only male character. Given the game’s cosmetic system, the gender lock will likely remain in place, but perhaps a second male character may eventually join and balance the roster. On the bright side, you can customize these characters with a small selection of hairstyles and faces. All equipped gear also shows on the character, and there’s a wide variety of cosmetic gear to earn or buy to further customize your character’s look. Plus there’s a bunch of cute pets you can equip to bring along with you.

Speaking of equipment, there’s plenty of ways to keep your character powerful. Each character has equipment, sub-equipment, and cosmetic equipment. Equipment can be modified in several ways, including increasing its level, ranking, evolution, and socketed runes. As equipment is improved, unique abilities are unlocked: offensive for weapons, and defensive for armor. Sub-equipment allows you to equip four additional pieces of gear to gain a 10% stat bonus. Finally cosmetic equipment can also include bonuses, although these are minor compared to regular equipment.

Combat takes place on small isometric maps. Character movement is controlled with the left thumb in a simple D-Pad that is centered at the spot where you touch the screen, rather than in a fixed location. Skills and potions are located along the bottom right in a small arrangement designed to be used with the right thumb. While there’s no way to zoom in or out, or view a minimap, each map is relatively straightforward and arrows will point out enemies and objectives that are off screen. Areas with enemies are also gated off until all enemies are destroyed, making progress through missions relatively linear and easy to follow.

Arcane Dragons offers a relatively standard variety of different game modes and activities to participate in, enough to satisfy most RPG fans. Here’s what’s on the standard menu, once you’ve unlocked all these features through leveling up:

Story Mode: A series of missions that tell the game’s story. Designed primarily for solo play and relatively easy to complete. Two additional difficulties, Hard and Hell, are also available for the late game and players wanting a challenge.

Time-Attack Mode: The same story missions as Story Mode, but on a timer. The faster you complete them, the better your reward.

Daily Dungeon: As the name implies, this is a dungeon that changes daily. Each day offers different rewards, with EXP and Gold available on the weekends. These dungeons come in ten different difficulty levels so you can scale your experience as you get stronger. 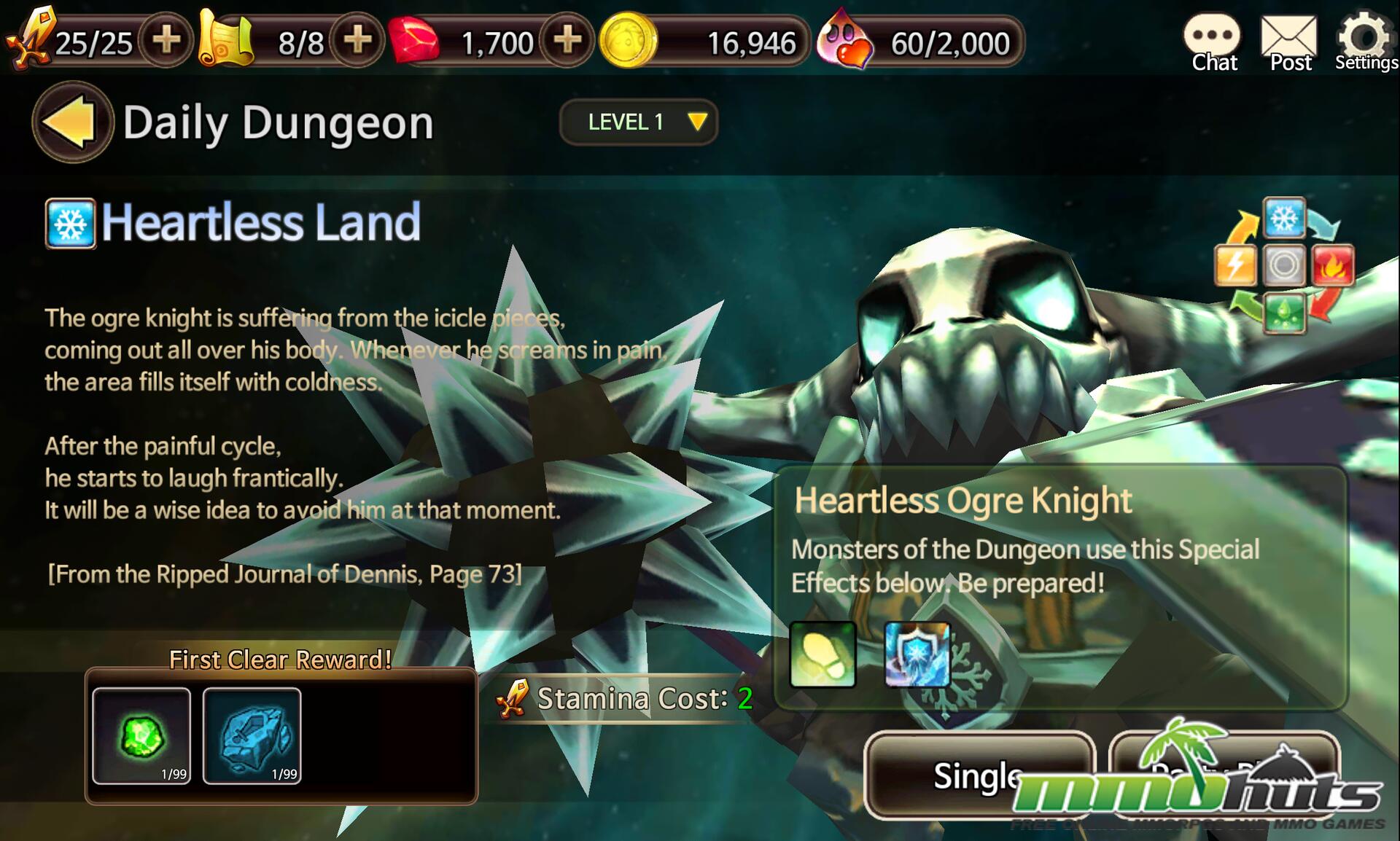 This daily dungeon is heartless.

Tower of Infinity: A weekly challenge to go as far as you can and earn a top score. Your ranking determines your rewards, and so long as you participate, you earn something.

Raid: An even more challenge dungeon, designed for multiple players.

Extra Dungeon: Another challenging dungeon, unlocked through the story mode. These are special boss levels that are recommended for parties, but can be completed solo. Like other dungeons, the difficulty can be increased as you progress.

Arena: A one-on-one PvP dueling challenge. Like the Tower of Infinity, your score will determine your ranking and earn you rewards.

One of the core game features that Arcane Dragons offers its players, a rarity among most mobile games, is real-time co-op and PvP. No asynchronous play or bots involved here, which means friends and enemies alike are earned, not simply added to a list. It also means that skill is a factor when playing in party mode, and especially in PvP.

Arcane Dragons has a chibi, anime-like styling to its 3D graphics. The overall look and feel when battling in dungeons is similar in tone to Happy Dungeons or Spirit Tales, and that bright, colorful design works well both in terms of performance and in drawing attention to the most important elements on screen. Dialogue screens in story, on the other hand, have a mixed art style: some characters (monsters, mainly) stay “chibi,” but the main characters have more of a stylized, detailed look similar to Tree of Savior. 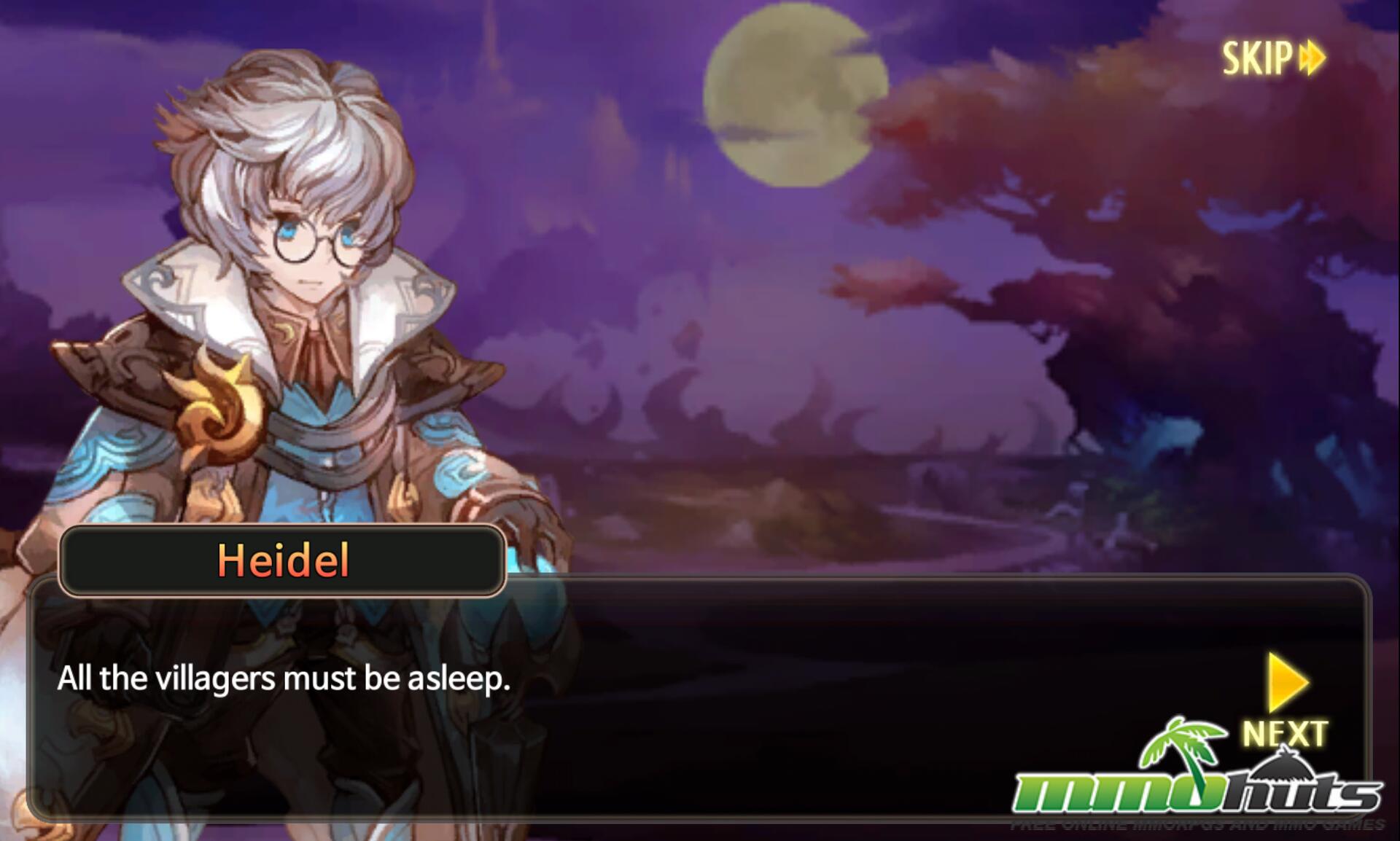 Heidel knows when you've been sleeping.

This mix can be a little jarring at times, though it isn’t uncommon with anime style games. What is perhaps more throwing is that the voices for characters follow the more mature art style. Your squishy-faced little chibi darling sounds anything but cute. If not for this, the rest of the game’s audio is great – music that changes between scenes, and sound effects that give you feedback on hits, misses, and incoming enemy attacks. It’s a general pleasure to listen to, if you don’t automatically mute all your mobile games.

Let me get some criticism out of the way first: Arcane Dragons still possesses many of the draining trappings of mobile games. It has a stamina system that will limit how much you can play. It has dozens of pieces of equipment to upgrade, which means plenty of grinding to keep your gear at its best. It has gachas galore. In order to be on top, or to truly enjoy your experience at its maximum, you will need to put a lot of time into the game. Still, Redbana and Snowpopcorn are generous, frequently gifting premium currency that will help keep you from feeling like you need to pull out your wallet.

That generosity helps balance out the game’s free to play nature, and brings the attention back to a truly fun mobile ARPG. It’s easy enough to learn, but takes time and skill to master in more difficult content. There’s a great amount of content considering it just launched globally, and there’s a promising lot more to come. There are some shortcomings, including the limited span of classes, but Arcane Dragons has definitely cemented itself as one of the newest quality games on mobile.