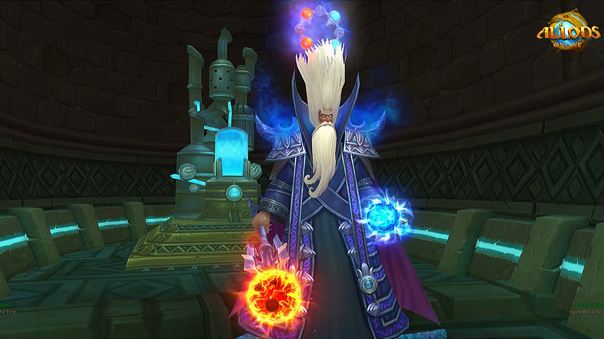 Allods Online is launching officially on April 26 with a major update, and they’re previewing the major changes in the patch today.

Incense, which currently provides boosts to stats, damage, healing, defense against crowd control and runes, and access to patronage spells, will be changing its function in game. It will no longer need to be activated, and the benefits will be active once a player’s earned patronage. Instead, Incense will grant increased defense against crowd control and access to the remaining patronage spells.

Holy Charms will be free in the Item Shop, and no new death penalties will be added. New characters will also earn special chests with starting equipment, including vanity and item shop items, plus rare quality gear. Same sex marriage will also be introduced.

On special, Fountains of Death will be sold for free from April 26 to May 2 to allow players to test new builds as all archetypes will have a significant change to their talents. A release event will also let players find coins which they can exchange for rare gear and a permanent new dance emote.

With Patch 2.0.02 coming April 26th, we wanted to take a moment to share with you some additional bonus features that are coming with the new patch!

The mechanics of Incense will change in the coming patch to further improve your Free-to-Play experience! In the current state of the game, Incense provides the following benefits – a stat bonus, a damage bonus, a healing bonus, an increased defense against crowd control spells, the effects of any equipped runes, and access to special patronage spells.

In Patch 2.0.02, you will not need to activate Incense to receive the following benefits – a stat bonus, a damage bonus, a healing bonus, the effects of any equipped runes, or access to Martyr’s Salvation. Instead, these benefits will always be available after gaining patronage. Using Incense will grant a player an increased defense against crowd control spells and access to the remaining three patronage spells. This change means that Incense will be almost exclusively used by high level players.

Even with these Incense changes, players will still be able to obtain Incense through the quest “Regular Customers” which will also still provide 1 Scroll of Knowledge.

Additionally, players will still be able to receive their patron’s blessing or a short stamina, intelligence, or strength buff through the quest “The Martyrs’ Blessings”.

We just wanted to remind you that there will be no additional death penalties added in the next patch and that Holy Charms will remain free in the Item Shop for 0 gPotatoes! Players will definitely make good use of the free Holy Charms with all the PvP encounters in the new zone, Kirah!

Everyone who creates a new character will receive two chests from the first NPC they speak to upon reaching Evermeet Isle or the Sewers. They are the Chest of the Recruit and the Chest of the Adventurer. These chests cannot be discarded and they are stored in the Item Shop section of a bag.

The Chest of the Recruit will contain vanity items and various Item Shop items including Scrolls of Knowledge, a Rough Dragon Hide Backpack, and new vanity items such as a stylish Engineer’s Hat! Each chest that is opened will also reward a player with a second Chest of the Recruit that has an active cooldown on it, and the chest cannot be opened until the cooldown disappears. The cooldown will continue to disappear even if your character is offline.

As you have seen from our past preview, all archetypes will have significant changes to their talent grid and talent trees. To assist with your tests to find the right build for you, Fountains of Death will be sold for 0 gPotatoes from the morning of Tuesday, April 26th to the morning of Monday, May 2nd! That’s right, they’ll be free!

A Fountain of Death can be used to reset all of your talents and distribute them in new ways as many times as you wish within a 2 day period. This item is not consumed after use and cannot be traded to other players. This item expires 2 days after being purchased.

With all the new archetype changes such as party auras, we hope that players will use this opportunity to find the most suitable builds and to share their experiences with the community. Enjoy!

Love is in the air! We are happy to announce that same sex marriage will be allowed with the in-game marriage system! We value diversity and this change will ensure everyone will have an opportunity to marry their loved ones even if they created a character of the same sex.

Since Patch 2.0.02: Astral Odyssey marks the the game’s transition to the official release, special NPCs will visit Novograd and Nezebgrad to help players celebrate the Release Event!

Special coins have a chance to drop from monsters throughout Sarnaut that can be exchanged for rare prizes including never-before released vanity items like Celebratory Wings, a Celebratory Costume, a Celebratory Helm, and a Dark Gray Wolf Pattern!

There will also be another special NPC who will help you bust an additional dance move! All you need to do is interact with the NPC during the Release Event to permanently gain a new dance!

We hope you’re just as excited as we are for the new patch and for the official release of Allods Online! Enjoy!