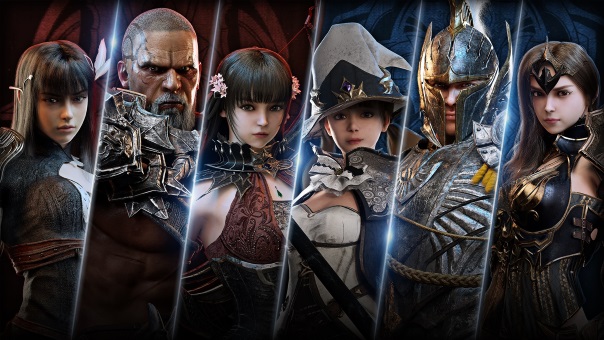 PC and Console players may not like it, but mobile gaming is bigger than it’s ever been. That’s not likely to change anytime soon, with technology on game (and mobile phone) developers only improving as time goes on. MMORPGs on mobile have come a long way, but ultimately, so many of them feel identical. They’re all about farming, idling, and building Attack Power to auto-fight your way through tedious, uninteresting PVP matches and raids. I can’t think of too many mobile games that really have captured my attention, as far as MMORPG goes. Until now.

Alliance vs. Empire (AxE) is an upcoming Mobile MMORPG from Nexon that I recently had some time to sit down and play in person. I also got to talk with Daehwon Kim, CEO of Nexon Red and Hun Im, Lead Game Designer at Nexon Red, about their inspiration and what their goals are for the game. It’s a primarily PVP-oriented MMO, with a trio of classes for both factions. Each has a Ranged Attack, Melee, and a Tank. One of the big questions to ask though, is “Does it matter which faction I pick? Is one stronger than the other?”

The short answer is “No”. Both factions, from the perspective of power, are the same. The trio of classes are thematically different, but what makes this interesting to me is that it’s not based on races or implied racism. A very popular fantasy trope is the notion that humans are better than the other races and builds upon that very strong racist/nationalist notion, and it’s pretty uncomfortable. Nexon chose instead to make all of the characters humans, and instead build the factions on human notions and ideals, instead of making it about the races. That way, the player feels a bit emotionally attached to the faction, and that could draw them to finding the side they wish to fight for. The two factions are the Galanos Alliance (“With freedom, anything can be achieved!”) and the Holy Darkhaan Empire (“Darkhaan prospers through divine order!”) and each has their own territory they control and own aesthetic. Galanos’ style is inspired by Vikings, fantasy elves, and eastern sword masters. Darkhaan’s look is inspired by medieval Europe, and has a more ordered, uniform look compared to the variety in the Alliance. 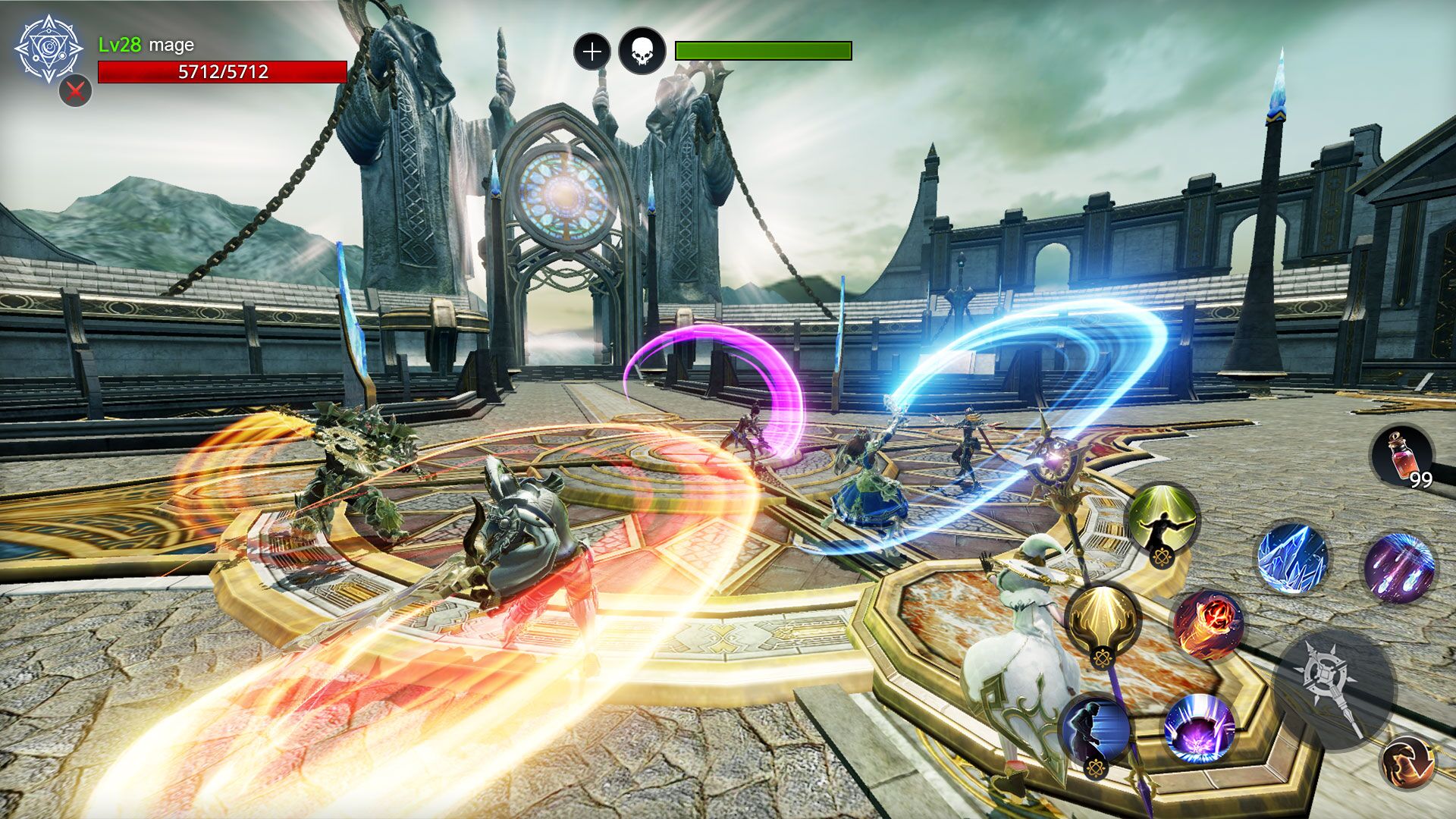 The PVP is fast and furious. I just hope money doesn't make it better.

One thing I always worry about in mobile games is monetization. I’m totally fine with putting money into a game that I am enjoying and want to support. I’m rational enough to understand that this is important to get more content for a mobile/free to play game. But the line in the sand for me is drawn when it winds up being a PVP game that is ultimately pay-to-win. From what I understand, PVP in AxE will be divided up in terms of the players Power Level/Combat Strength, but we don’t know as of yet what’s going to be available in the shop. That does fill me with a bit of worry, because nothing’s more infuriating than being killed over and over in open-world PVP, then bullied further in PVP that I queue up for. Couple that with the game’s “Revenge/Tracking” systems, the potential to grief people is very high. You can open up a mini-map that shows where all players are (both factions) are located at on your map, and you can auto-run their way. This is great if you’re communicating with your faction/guild, and they need help.

It’s also great if you want to track someone down that killed you, or simply want to keep the other faction from leveling on a map that you’re on. So how will they prevent players from just obliterating you and halting all progress? They did come up with a creative answer to that. If you’ve been killed a few times in a row, you receive a bubble that prevents all PVP damage. You can’t be killed any further, as long as you don’t attack a player. As of this writing, it lasts until you attack a player, so you can’t abuse it by getting back at them and attacking other players with no consequences. At the end of the day, it’s still a PVP MMO, and I’m certain that will be obvious going in. Thankfully, with and without the aim assist (used in the auto/semi modes), control and targeting are very sharp. It’s important to not spam abilities and your auto attack though. Some of the animations are a little on the long side, so you can put yourself into a bad situation by spamming those attacks. 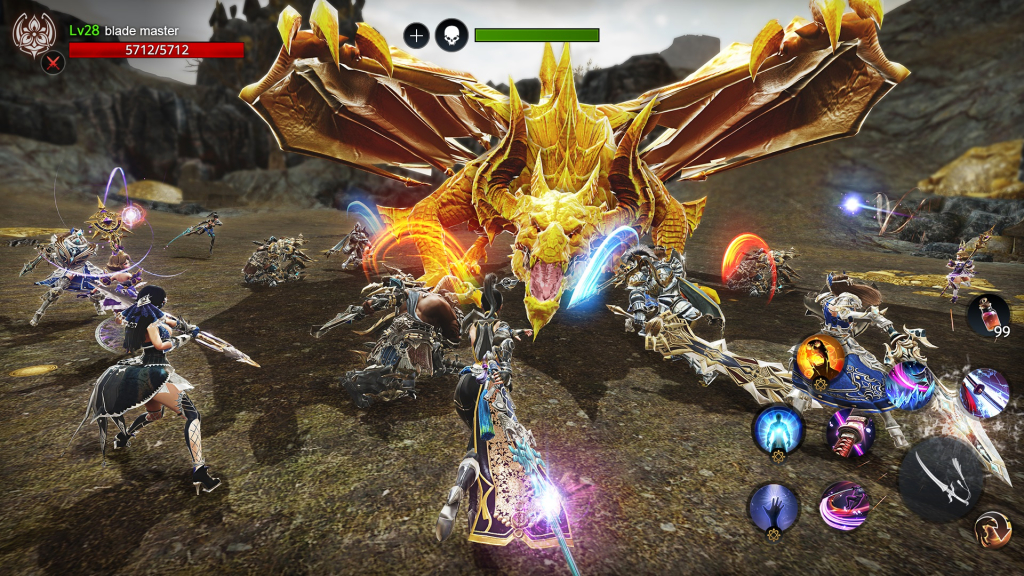 If the regular bosses are anything to go by, I'm excited for the 75 vs. 75 raids.

Alliance vs. Empire looks to have an absolutely massive world, with plenty of epic/world bosses to fight, challenging dungeons to tackle, and lots of PVP. Aesthetically, this is a very appealing game, and we tried it on a nice, wide variety of mobile devices. Sadly, I don’t think there are plans for the Kindle to receive a version of it (which is the tablet I personally run), but it will run on my Note 9, so that’s fine in the end. It does have the popular Auto-Battle/Auto-Walk, but there’s also Semi-Auto and Manual control modes. I’ve fought a few of the world bosses by now, and going into those using auto-battle is a sure way to get killed. Be safe, and swap over to manual. Thankfully, this game also has an Auto-Party system, so if you’re fighting one of those massive bosses, others nearby will auto-join you and can help you do battle. While playing against PVE content, auto-battle isn’t so bad, but I feel much better having full control at all times, especially when players can come out of nowhere.

So far, Alliance vs. Empire plays smooth and is enjoyable. I didn’t really feel bad about being PKed by people, but it was a friendly crowd that wasn’t trying to grief and make people miserable. I think Nexon is delivering on their goal of a PC-quality title. There are some pretty wild modes, like 75 vs. 75 raid, where two raids of players tackle one boss, and whoever does the most to it reaps the rewards. The actual smaller raid bosses have time limits too, and after five or six tries, we still could not quite get the weakest ones down. I’m proud to say that my team got the farthest, at 1 1/2 bars of health left. There is no shortage of content, from quests to the rotating boss cast, so I feel like there is a lot to do for PVP and PVE players alike. While I do worry about the nature of the cash shop, that’s going to be a fear in virtually every f2p game.

I’m excited to see where Alliance vs. Empire goes.