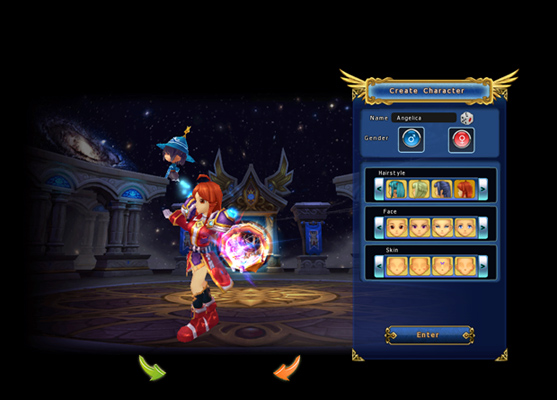 Alfheim Tales is a client-based 3D MMORPG brought to us by Gamedp. Boasting “anime-style” graphics, the developers promise an outstanding world to travel and intense battles to participate in. The game is low-spec and is integrated with websites such as G+, Facebook, and Twitter. Gameplay is very traditional, with quest-based progression and a point-and-click combat style. There is also an interesting pet and sprite system, with over one-hundred pets available. Let’s see if Alfheim Tales can deliver on its promises.

You aren’t given much to work with. A few hair styles, some face types, your gender, and that’s about it. You don’t even get to choose the color of your hair – the style you choose already has a color that you can’t change. There are four classes to choose: Knight, Mage, Priest and Assassin. Nothing new or exciting, to be honest. The only place you’ll find some decent customization is the neat pet system. Can’t say I’m happy with that.

What originally caught my eye with this game was the art style, which is marketed as “3D anime,” and that basically means it’s chibi or very cutesy. The graphics are very dated, especially for a client-based game in 2013. You won’t be mind blown when you play, but unless you’re not a fan of the art style, you’ll find some joy in the bright and cheerful world that is portrayed. I was very disappointed with the limited perspective, as you’re not given much control over your camera past being able to orbit around your character. This means you can’t really look forward, or up, and your view is extremely limited by this, which can feel cramped. 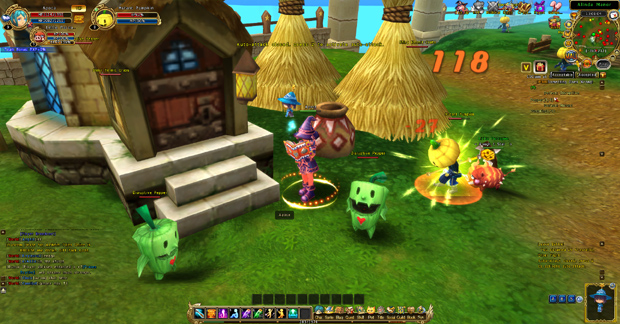 I already mentioned a bit about the controls at the end of the “Graphics” section, but I’ll say it again – the camera controls suck. Other than that, most things seem to be OK. The UI (though very generic and out-dated) is functional and I liked that both point-and-click and WASD movement was available. You can press V key to initiate auto-fighting (which I’ll get into later in the gameplay section), which makes this a great game to play if you need something to pass the time but don’t want to invest much effort.

The community is mostly foreign (which is understandable, as I played on an SEA server, the only one available at the time). However, I noticed a lot of English speakers on the global chat. To my surprise, I even found a couple of guilds from my time in Age of Wushu, so there are at least a few decent guilds playing the game. Despite that, it seems like a majority of players are younger (probably around the 12-15 year old range), which is understandable considering the simplicity of the game and the anime-style graphics. Along with young teens comes a lot of trolling, so that was a bit of a negative. Other than that, my time participating with the Alfheim community was alright. 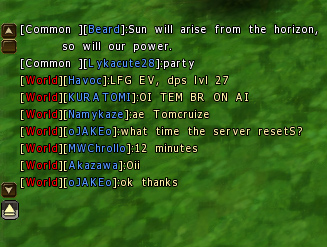 Right off the bat I noticed that I would not enjoy the gameplay in Alfheim Tales. This disappointed me a bit because I truly did find the graphic style appealing and I was hoping for something decent. Unfortunately I found an out-dated game (in terms of gameplay mechanics), and a game that offers a complete hand-holding experience with a lot of automated systems. I can understand the use of an auto-pathing features – most MMOs require a lot of meaningless running around that can be annoying. What really got me, though, was the auto-fighting feature that completely eliminates your input as a player while questing. 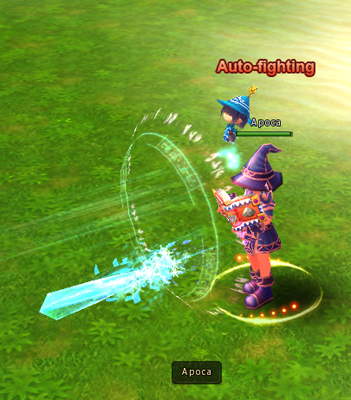 I do realize that while this does not appeal to me, there are probably a lot of people that will enjoy that they can play an MMO without having to invest a lot of time and effort. If you’re doing work, or even playing another game, this can be a decent game to play on the side. Only if you don’t mind a slightly pay-to-win cash shop, that is. Progress Quest is still the best game to play if you don’t want to have to actually play the game. Alfheim is decent if you don’t mind downloading a client and having to click every once in a while, though. 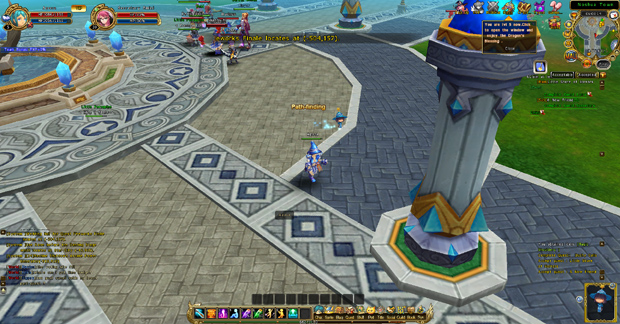 Combat is OK, but is kind of ruined with the Auto-fighting feature. Why bother if you can let the AI do all the work, right? The few times I did take over manual control of fighting were for some of the harder mobs, and those fights weren’t really intense. I do have to praise the animations and neat effects while fighting, though. As I type this, my character is killing some mobs for a quest and it’s quite the light show. 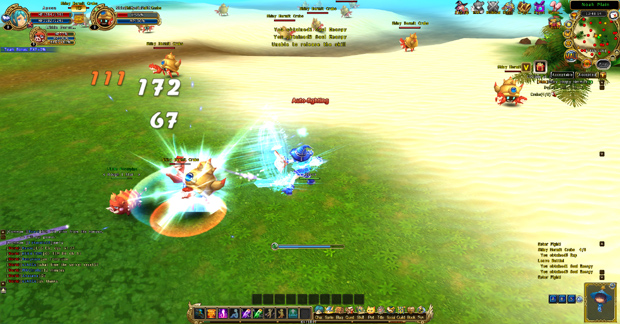 Quests are extremely simplistic and follow the traditional formula – collect/kill X amount of Y and in return I’ll give you Z. The most input you’ll be required to do in the game while be accepting quest, as afterwards the game will take over and bring you to the quest objective and start killing/collecting. After experiencing the repetitive questing, which is the primary mode of experience game (at least in the beginning), I found myself thankful for the automated gameplay. Repetitive questing is never a good thing in a game, especially when it requires that a near completely automated gameplay is required to make the game something that people will want to play. I’m more than a bit disappointed. 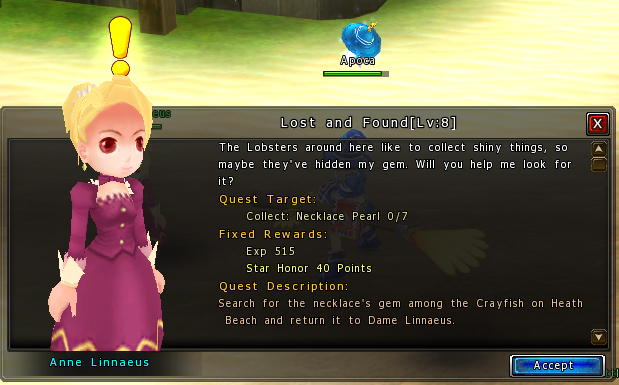 Something neat that I enjoyed was the Sprite and pet system. You can have one pet and one sprite out at any time to help you in fighting. Both the sprites and the pets can upgraded, enhanced, and evolved so that they can become more powerful. Sprites can also be used for things such as entering the Sprite Realm to fight epic bosses, treasure hunting, and they even have their own talent trees. There are a ton of pets to be made, and a lot of them actually look great. Looking at the Pet book, there seems to be a total of 108 possible pets right now and they span several different elements such as air, fire, water, and toxin. This is definitely one of the better features in the game, and the one that gets me most excited to play.

I came into Alfheim Tales with a lot of optimism, but was a bit disappointed with what I found. Despite having some great anime-style chibi graphics, the gameplay was repetitive and boring, especially due to the questing and automated gameplay. The pet and sprite systems helped redeem the game a great deal, and I found myself playing longer than I thought I would have just because of them. This game would be great for you if you’re looking for something that is low-spec, or if you just don’t have as much time as you would like to play games. If you do have a lot of free time and a decent computer, I would have to suggest you look for something else as this game will more than likely not appeal to you.

Features: 3/5 –
Repetitive questing but the pet/sprite system saved the day.

Graphics: 3/5 –
I liked the graphic style, but the overall quality was low.

Community: 3/5 –
A lot of young people means a lot of trolling, but it’s not all bad.

Overall: 3/5 –
It’s an alright game, but will only appeal to you if you’re looking for a low-spec game or something that doesn’t require much input.