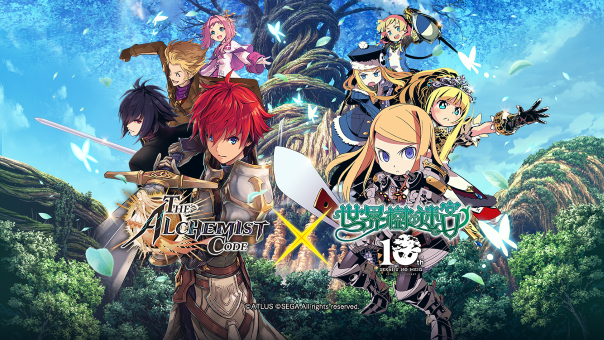 The Alchemist Code announced that beginning tomorrow (April 4th, 2019) they will be teaming up with the Etrian Odyssey franchise. This event will last from April 4th until April 24th, 2019 and features a number of free units, summonable units, collaboration gear/mementos, and new collaboration quests. Players who complete the Etrian Odyssey Collaboration Quests, they will receive two characters for free – Fencer and Gunner. In addition, two of The Alchemist Code characters will be available in Etrian Odyssey versions –Dragoon Chloe and Dancer Shenmei. In addition, there are two new quests, which have blurbs below to tease the players.

Quest 1: Harbinger, Fencer, and Shaman were summoned to Babel by the enigmatic Ouroboros to quell horde of monsters never seen before. During their search for these monsters, they heard rumors of a black female knight defeating these monsters. Worst of all, she had attacked the local knights too. Is this black knight a friend or foe? Can these adventurers protect Babel from this monster invasion?

Quest 2: A mysterious voice was heard beckoning for help. In a flash of light, Gunner, Protector, and Sovereign were suddenly teleported from their world to Babel. Unable to ignore this call for help, they set out together to find the origin behind this voice. Unbeknownst to them, an epidemic that causes green bruises on the skin too had swept over a nearby village out of nowhere. Was their summoning linked to this epidemic?

There are also four Etrian Odyssey characters available to be summoned: