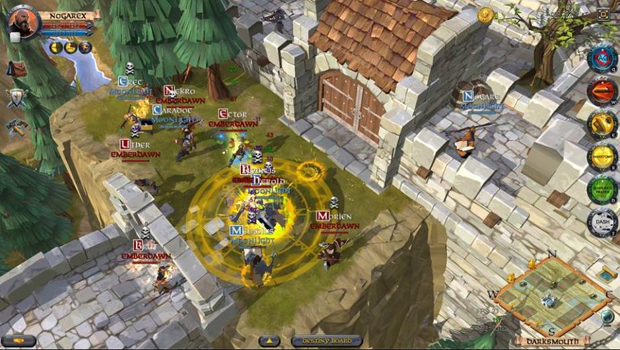 Albion Online is a sandbox, isometric MMORPG. It’s been a hot topic for lots of sandbox gamers for the past year or so, and our site even had a chance to give it a run through in the very early days of the alpha. While the state of the game was rocky back then, the devs have been putting some serious work in over the past 7 months, and I was selected to update our coverage over the past several days. The reason Albion Online has been so looked forward to is the massive emphasis on crafting, the hardcore style of play where you lose all your gear when you die, and its cross-platform nature which will allow for people on mobile devices to play with those on the computer across various operating systems. So you can see why this game has been the center of attention for a lot of hardcore gamers and sandbox gamers alike.

The graphics in Albion Online are not the highest of qualities. If you’ve played Runescape in the past few years, you’ll probably be right at home. Yet, despite the overall low resolution, the game still manages to look quite decent. And there’s a reason for it, too. The graphics can’t be too intense so that mobile devices can play them without blowing up or draining your battery in an instant.

Even on the windows client, you can tell the game was designed with mobile in mind with the simple graphics, isometric perspective, and large buttons on the UI. You can easily imagine the same interface on a tablet. However, the UI also looks extremely bulky when playing on your computer. I think that this will be a major turn-off for a select few, but will probably be easily looked over by most, including myself. 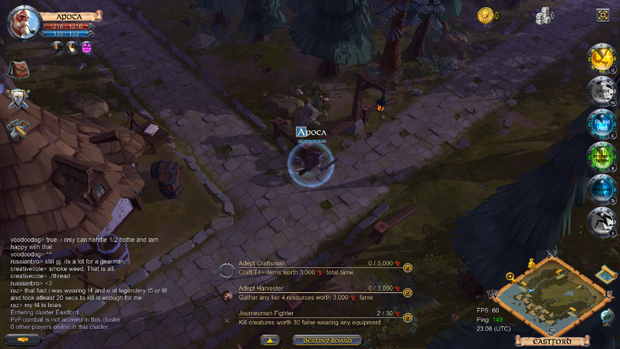 You can see how the UI is a bit clunky.

Albion Online is very much a point-and-click game. I personally would have preferred WASD movement, as it’s a lot easier on my wrist. My largest gripe with the game is not being able to rotate the camera. There were some situations where I would have liked the ability to change my camera angle, usually when trying to click on certain resources that are tightly grouped together. But, for the most part, the controls are fairly smooth for an alpha game.

As you might expect from a sandbox game, the customization is fairly extensive, at least in the later bits of the game. When you are making your character, though, the options are currently few. You will get a limited number of options for stuff like your hair, facial hair, and underwear color. Later on, there are apparently plans for up to six races, but right now human is the only option.

The gameplay in Albion Online definitely strays far from the modern formula of MMORPGs. It’s far from a themepark, but still has bits and pieces of that genre that help it along. One key examples include dungeons and mob camps that can be farmed for silver. Overall the features trend far more towards sandbox though. Every piece of gear in the game is made by players. Besides the starting areas, all of the ‘cities’ are player made as well. This, of course, means the game runs on a player economy with player interaction being supreme. Something a majority of MMOs seem to ignore or outright offer ways around these days. 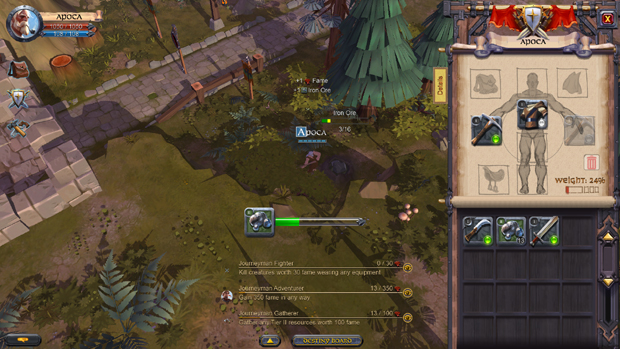 Iron ore is quite abundant in Albion.

As I said, everything is crafted. Instead of levels, things are structured into tiers. Tier One tools can be made with the basic and easiest-to-get Tier One resources. To get Tier Two resources, you’re going to have to use the tools you made with the Tier One resources, and it’ll take a little bit more searching to find them. Eventually, as you get to the higher tiers, you’ll need to get further and further from the “safe” areas to get them, which puts you at risk of PVP, which as previously stated puts far more on the line than your typical MMO. Which is a good incentive to join up with a strong guild who can protect you while you’re getting the higher tier resources to make the best gear.

When you craft items like armor and weapons, you get to choose what abilities come with the gear. That’s right, rather than classes or skill trees, your abilities are defined by the gear you’re wearing. So you might have a set of “gathering” leather gear meant to help you travel fast and a set of plate armor that is designed to let you tank damage. While at the same time you might have another set of plate that is more designed for dealing damage by choosing skills that increase attack speed and lower your enemies’ defense. You are what you wear, in other words.

The tier system is both interesting and kind of frustrating. If you’ve failed to stock up on tools before dying, you’ll quickly find yourself back at square one and having to build up everything from scratch. You do have the potential to run and grab your stuff, and you’re even given a temporary shield that makes you immune to damage, but the likelihood of you actually getting to it without dying a second time is fairly low if you don’t take the time to re-gear beforehand. So you’ll need to stock up on both gear and tools before you head out. And you’ll more than likely want to stock up in more than once place, as banks aren’t universal – the bank you have in one town won’t be the same as the one you have in another. 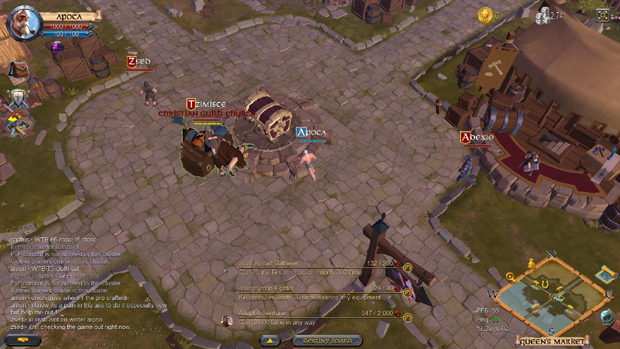 You'll be visiting this place a lot.

One ailment that a lot of sandbox games seem to have is lack of direction. Albion Online has chosen to combat this by use of the Destiny Board. This is a massive spider-web of achievements that can help point you in the right direction and act as a sort of dynamic task system. When you first check out the Destiny Board, you’ll be a bit surprised – it gives a similar impression as Path of Exile’s massive specialty tree. It’s not quite on the same scale, but is still impressive.

The PVE element is a lot stronger than I thought it would be. In a lot of sandbox games, I feel as if the PVE combat is tacked on as an after-thought. However, in Albion Online you can tell it’ll be an integral part of the game from the start. There are both animals to fight and skin, and humanoid enemies to kill for silver. Dungeons are present as well, though not instanced as you might expect – you can run into other players in them and, if they’re in a PVP zone, I imagine battles for loot will ensue.

On the other end of the spectrum is the ability to own land and build houses (or other structures) on it. One of the main perks of building a home is extra storage. Access to crafting stations is another bonus. You’ll also be able to display trophies, which will serve to give you buffs. Generally, everything in the home will give you some kind of benefit to encourage you to have it. However, I have to admit that I wasn’t able to get into this system of the game in the short time I had to play. So everything I have on this system is second-hand. 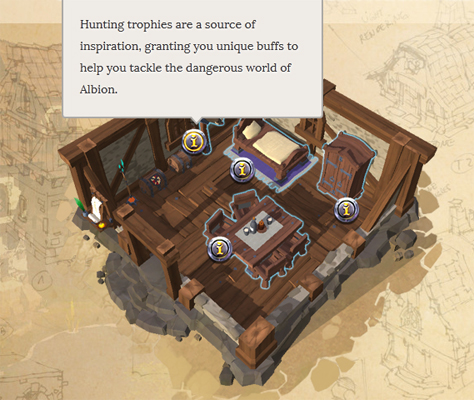 As I said earlier, when you craft a piece of gear you’re able to choose what abilities will come with it. Naturally, higher tier gear has access to more and better options. Each type of gear – cloth, leather, plate – seems to follow a sort of theme – plate is more suited to tanking, for example. But they aren’t restricted solely to that theme – you could go with abilities that focus more on damage dealing with plate, or you could just mix and match pieces from different sets for a wider variety. This makes for some interesting combat.

Speaking of the combat, it’s fairly fun for a point-and-click. It’s suitably difficult so that you can’t just run into a fight and button mash and expect to win. But at the same time, it is still quite accessible. Like most games, I feel that ranged combat is a bit OP. However, there are abilities for melee designed to make ranged combat more difficult – like dash or various slows. But that comes into play more in PVP than PVE. All-in-all, I found the combat a pleasant surprise when compared to what my expectations originally were. Which is good, because combat plays a big role in the game (though not the only role, for sure).

A huge part of the game is PVP. Not only is it a great way to stock up on resources (nothing like a bloated gatherer to top off your resource reserves), but the combat in the game is fairly fun, especially group combat. PVP also comes into play with the player cities and territory control. The way the inventory system works makes death meaningful, as well. When someone kills you, they’re not just making you take a quick trip to the respawn statue – you drop everything that is on you and that makes you think before you go into a fight.

The territory control system should be quite interesting once the game is fully released. Even in the alpha, you could get an idea of the grand scheme of things by looking at the world map. It portrays large arrays of land controlled by guilds. It even has hints of a sort of trade route system which I’m honestly not familiar with. I imagine that in the future they plan to set it up so you can make money through some sort of trade route system, judging by the little ships and whatnot they have going around the map.

Albion Online is an interesting mixture of sandbox features. It’s like Runescape and Ultima Online got together and bio-engineered a super baby. While the game isn’t quite as hardcore as Ultima was in its “best” state, it certainly has its moments. Plus it has the bonuses of being a “modern” game to help sweeten the deal. If you’re a fan of sandbox games that require effort, Albion Online is definitely a game you need to keep your eye on. The cross-platform availability should make things quite interesting as well.

Want more Albion Online? Catch our first look to see it in action!