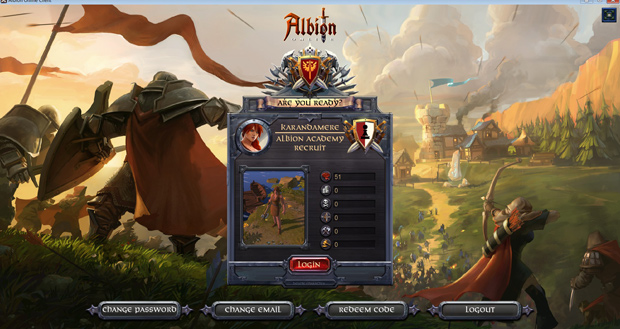 The Alpha build of Albion Online is truly an interesting and bold undertaking by Sandbox Interactive Studios. The overhead camera angle, among other features, truly makes it feel like a trip back to the MMOs of the early days of PC gaming like Ultima Online and Anarchy Online. In this title, you do not level; instead, what you wear and how you use what you have determines whether you live or die. A very simplistic rock-paper-scissors combat system can very swiftly take you from smashing wolves to pieces in the woods to being crushed utterly by the rogues hiding in the darkest caves. As this is an Alpha, there are of course bugs, crashes, and a host of problems that will not, with any luck, be in the game as it comes closer and closer to completion. 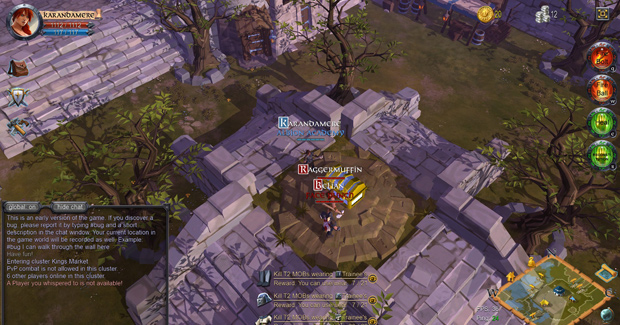 The world has a fantasy based setting with castles, wilderness to explore, and caves to delve into. You can build your own settlement to live on and transport to, provided you can find a space of land that someone else does not already own. I did notice that all of the real estate in the Alpha was gathered up relatively fast. I would expect similar to happen in the release of the game, without smaller plots of land or a larger amount of land to settle upon. Albion Online is also heavily reliant upon guilds and teamwork, where guilds can fight over control of territory in the world. Controlling territory gives your guild a greater access to materials such as wood, stone, gemstones, and cloth which can be used build your own equipment, as well as your guild’s village. 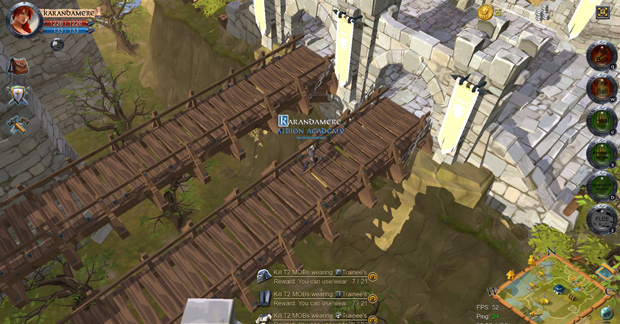 Lord British Is Not Home

Much like Ultima Online, a fully PVP MMO of years past, you can go into the world and murder other players while they are out on their own business. There are supposed to be zones where PVP is outlawed, and breaking that law can grant bounties or penalties to those who break the law. To those who die in the wilderness, I would like to offer you some important advice: craft some spare equipment and keep it in your bank in the main town, or nearby wherever you may find a chest. If your body stays in the wilderness too long, the items on your body begin to decompose and fade away. As time passes, your equipment will also break. You cannot repair it. Structures can be repaired, but not your items; at least not yet, and there is no word that I have seen on that changing. A lot of talk in the general chat says you will lose equipment often. This coincides with the “Destiny Board,” a series of talents and unlocks where you gain access to new items and abilities. 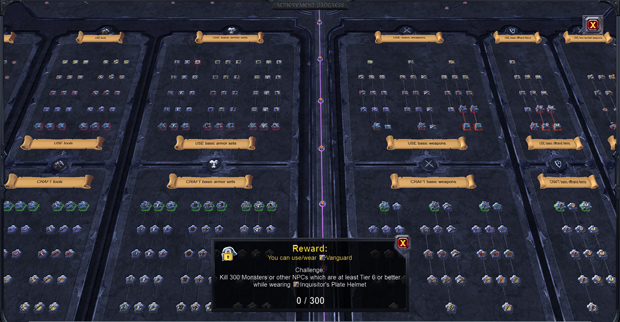 Albion Online offers a “Tier” equipment system. There are currently seven tiers of equipment, from the starting gear you can craft once the game begins, all the way to specialty equipment that can be crafted much later on in the game. I have to stress the “later” part, though the devs have changed how many pieces of equipment are required to go up to the next tier of crafting. The beginning of this game really felt like “Crafting Simulator 2014,” with the amount of crafting that your path can take. However, there are options for progress. Killing enemies with a certain tier on can unlock the ability to wear the next piece. From there, you can farm the materials to make it yourself, or if you are strapped, you could perhaps purchase it off the Auction Hall. 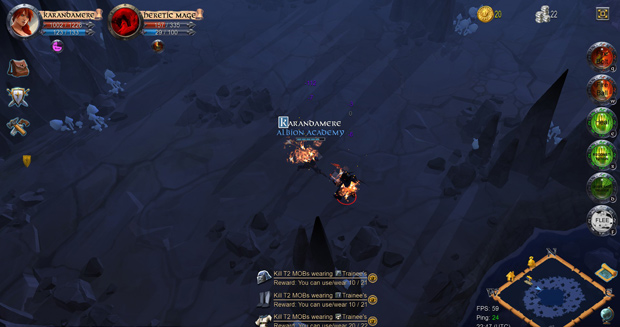 Danger Around Every Turn

This is definitely a game where it pays to be in a guild. And I don’t just mean to have a tag over your head. You need to really belong with a trusted band of companions. The developers insist that coordination and teamwork is more vital for conquering territories than simply “zerging” (100-200 players rushing a zone to try and simply overwhelm the rival guild). That is not something I have seen enough players confirm one way or another.

There are more dangers than just your fellow players though. Powerful enemies are lurking over every bridge! Heretic mages and rogues lurk in the woods and in caves, seeking your blood if you come too close to their domain. Killing animals and other natural creatures does not net you coin, as in other games. They have strived to make Albion Online a more Realistic-Fantasy setting, where wolves, boars, bears and the like give you furs or leather instead of money. Defeating humanoids will however net you money (which is taxed, giving you less than the amount shown). The overworld enemies do not appear to give much in the way of silver. That leads to… 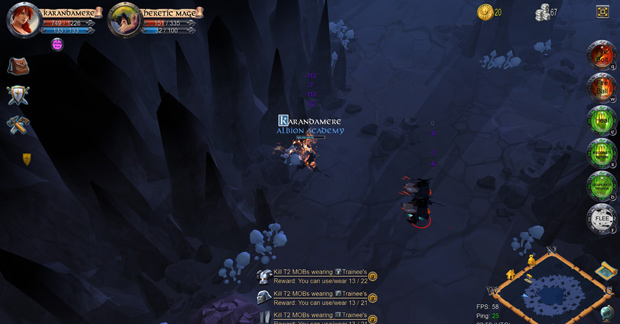 Dungeons! Most maps seem to contain at least one dungeon you can delve into, if you are strong enough to get to it. I would recommend always scouting ahead, and planning your route to get somewhere. There is always a chance that you can perish in a sudden attack, leaving you spending more time running back to your body, than you do fighting and amassing a fortune. Between the dungeons, and selling crafted gear, you can quite easily make money in this world. Some of these dungeons are tiny, circular affairs where you wander and kill, while there are longer, larger dungeons with greater challenges for those powerful enough to tackle them. What can you use money on? Your village and home, of course! You have to fortify your hold as a team, because when darkness falls, demons can be seen trudging through the shadows, destroying everything in their path. I have yet to come across them, but I have read of their existence. 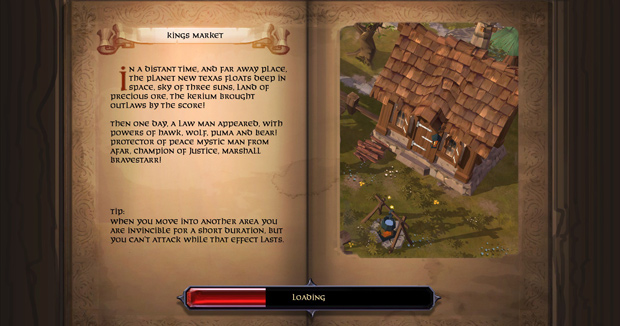 All Is Not Paradise

For the PVP lover, this could be the game you have been waiting for. Its fast-paced combat and guild-oriented territory claiming appeal greatly to people who are into the maxim of “What’s yours is mine, what’s mine is mine”! There’s always something to do and someone to attack. Politics and intrigue could certainly be a large part of this game, just as much as combat. A guild allying together to battle stronger powers, with greater challenges to overcome, is most certainly a positive. You can quite literally build whatever your heart desires in this game. Personally I tend to wear full plate and carry a staff and healing tome, because I love spellcasting, but I also really like to not be as vulnerable. And without casting penalties (a’la Dungeons and Dragons), I can hurl fireballs from the safety of my tin-can. 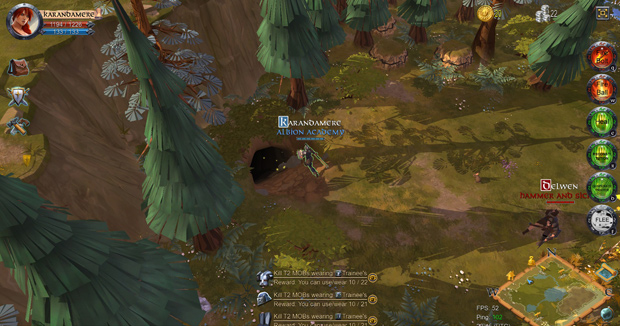 But it is not all happy-go-lucky killing non-stop! There are drawbacks to the current system that I sincerely hope get revamped. I detest the idea of gear not being able to be repaired; meaning gear’s going to break and you will have to recraft, which means farming again, unless you take a great deal of time out of your day to farm and put materials in the bank for use later. At one point in the beta, one of the tiers (4 or 5 I do believe) required fifty pieces of the same slot crafted in order to access the next level. That is more than a little outrageous. I was glad to see they lowered it to a more manageable number. I’m all for things taking time, but that seems like it is just grindy on purpose.

The system just seems to exist for the purpose of taking time, of constantly crafting equipment that serves no purpose other than to replace it when it inevitably breaks. If everyone is doing this, I have a sinking suspicion that unless the playerbase is gigantic, the economy will stagnate with the tons of equipment that floods the market. That does not speak well for how they are preparing their game. 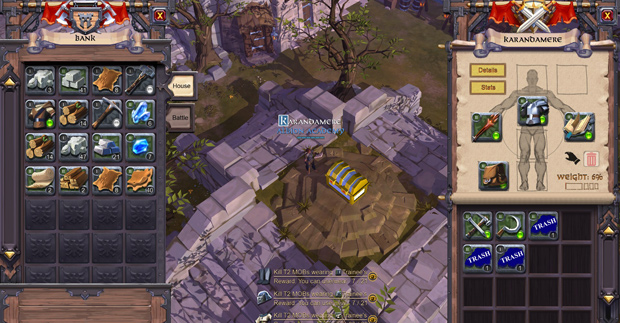 Death. Death is a part of this game. If you play, you will face the reaper at some point or another. Even the cleverest, most prepared strategic mind will fall prey to chance, or a hungrier player. As of this particular build, items decay very quickly on your body, so to those in the Alpha or who make it to the Beta, I do warn you: If you do not get to your body fast, I hope you have mats on hand, because your precious armor can and will deteriorate into a trash item. I recall a time where I was wandering a zone and came across an aggro boar. It was a surprise because all of the wolves were passive. That struck me as incredibly odd. But the boar killed me, and I learned just how frustrating the corpse runs will be. If you do not have spare equipment or a friend to go with you, prepare to feel the agony of dodging angry animals. There is no loot all command, so you have to drag and drop your items one at a time. (If you guys are listening, that would be a stellar idea!) 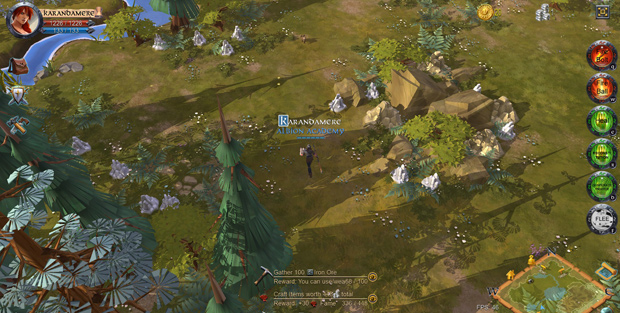 Speaking of materials, if you are wielding a weapon, you cannot farm any items in the world. Not stone, gems, wood, or cloth. You have to unequip your weapon, and then click on the desired material. That will auto-equip the item you need. Much of your inventory will be kept with farming items in the early game, so I recommend strongly buying or crafting a nice bag to increase your inventory space. While I appreciate their want to make the game more realistic, as you accrue penalties to movement speed from overburdening your inventory, it can be incredibly burdensome (no pun intended). I sort of like being able to hold an absolute metric ton of equipment, as it makes me feel more heroic, strong.

Heroes with Attitudes: Work in Progress.

Albion Online is a very unique title in the current MMO market. I do fear that perhaps they are trying to do too much at one time with one game. I love the concept though, and had it been several years ago, I’d have hopped on this with a killer instinct and an eager eye. Since this is an Alpha, there are many things that will no doubt change as time progresses; I do worry that there is no real actual story, and that for all intents and purposes, there are no quests to undertake. You just get to roam the world and make your way, which is interesting in and of itself. I’m interested to see what else comes of this title, and perhaps I will be able to give more updates as time progresses into the Alpha and Beta of this bold, refreshing MMO.

I also appreciate that it is 100% free. Now, I will grant you that this is an alpha, and as such a cash shop would be incredibly unlikely. The website touts that it is going to be 100% free, but time will tell if there is some manner of cosmetic/crafting shop that pops up after the game releases. I do however have high hopes for it to stay free. It takes a while to get into the game, with all the crafting that is done, but again, it is a new concept. It is similar to other titles in minor respects, but between its heavy emphasis on sandbox elements and ambitious multi-platform claims, it is certainly in a class of its own.