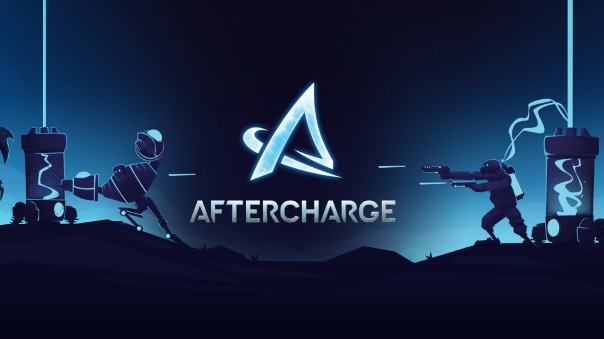 There are a few tropes in sci-fi when it comes to robots and humans.  Robots are unfeeling; humans are emotional. Robots are tough and sturdy; humans are fragile and prone to perishing easily.  Robots are mechanical, by-their-programming machines, and humans are unpredictable and conniving. Well, what happens if you reverse those tropes?  I’d like to think you end up with Aftercharge, a 3v3 arena combat game with some pretty interesting twists.

The two teams of Aftercharge are the robots and the enforcers.  The enforcer’s job is to eliminate the robots and protect their energy extractors.  The robots want to destroy said extractors, of course — we need our conflict to come from somewhere, after all!  The catch? Enforcers can’t die, but are limited to their energy reserves, which charge at the extractors. The robots, on the other hand, are all invisible, but can only damage the extractors by getting up close and punching them. 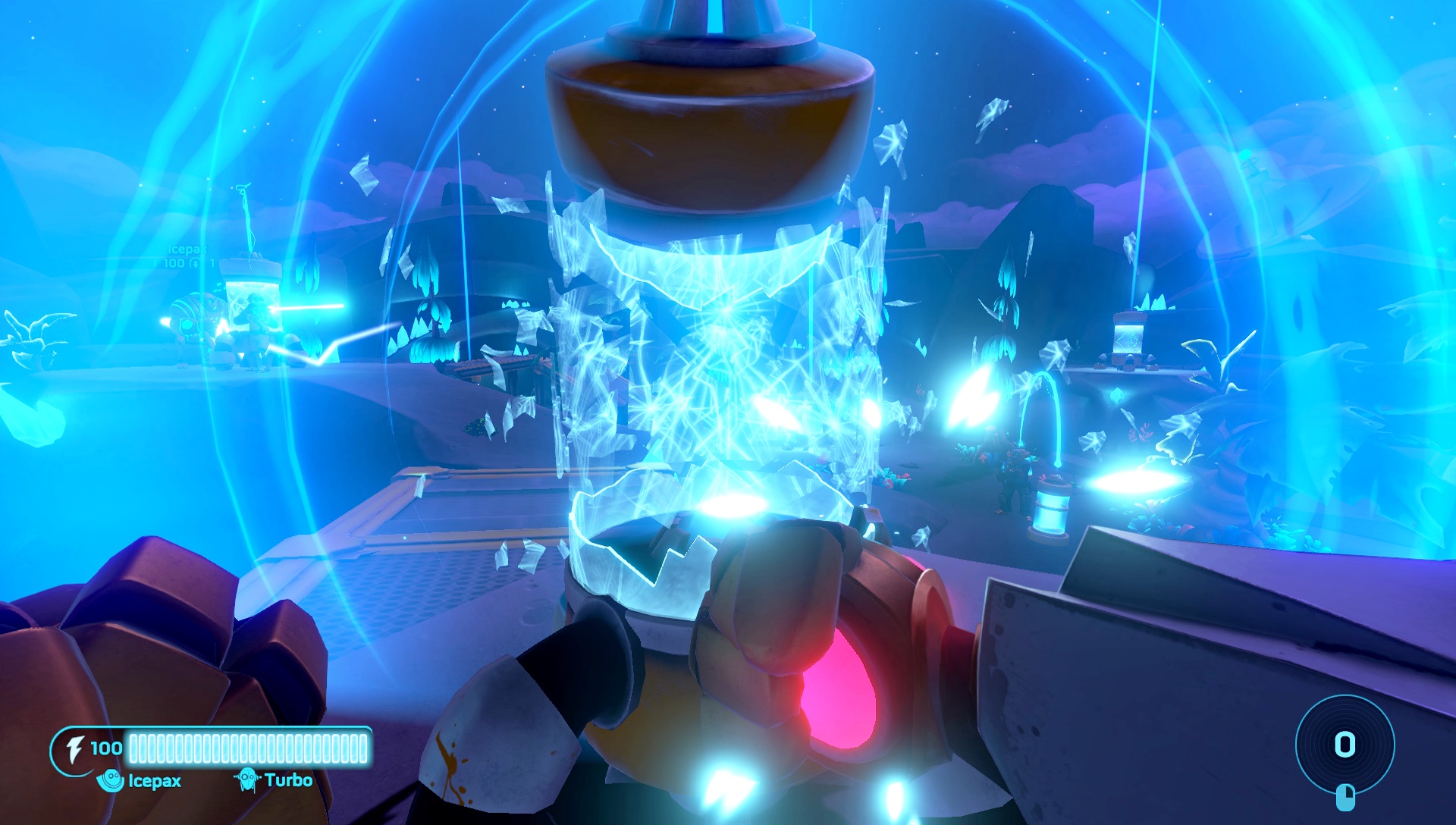 The extractors are the key to winning or losing, but robots can only destroy them via melee attacks.

Imbalanced, you say?  Well, not quite. The robots are invisible, but the enforcers have tracking equipment that can indicate if a robot is nearby.  In fact, if a robot walks directly in front of an enforcer, they’re spotted immediately and a tether links them to show other enforcers where the robot is.  To win, the Enforcers must disable all three robots at the same time. Simple, right? Well, except for the fact robots can revive each other quickly, and robots can also share some of their health to supercharge other robots, giving a variety of benefits such as damage protection or speed boosts.

Robots, on the other hand, have the disadvantage of having to melee the energy extractors, and attacking them immediately disables their stealth.  There are also six extractors to destroy, and only three robots. Enforcers have the advantage of range in this case, what with their guns and their bombs and their artillery strikes and whatnot.  Each attack the enforcer uses, though, takes up precious energy, even their basic attacks. So it becomes a race to protect your energy source as the robots try to take them away from you, and it involved some pretty intense mind games when I was playing. 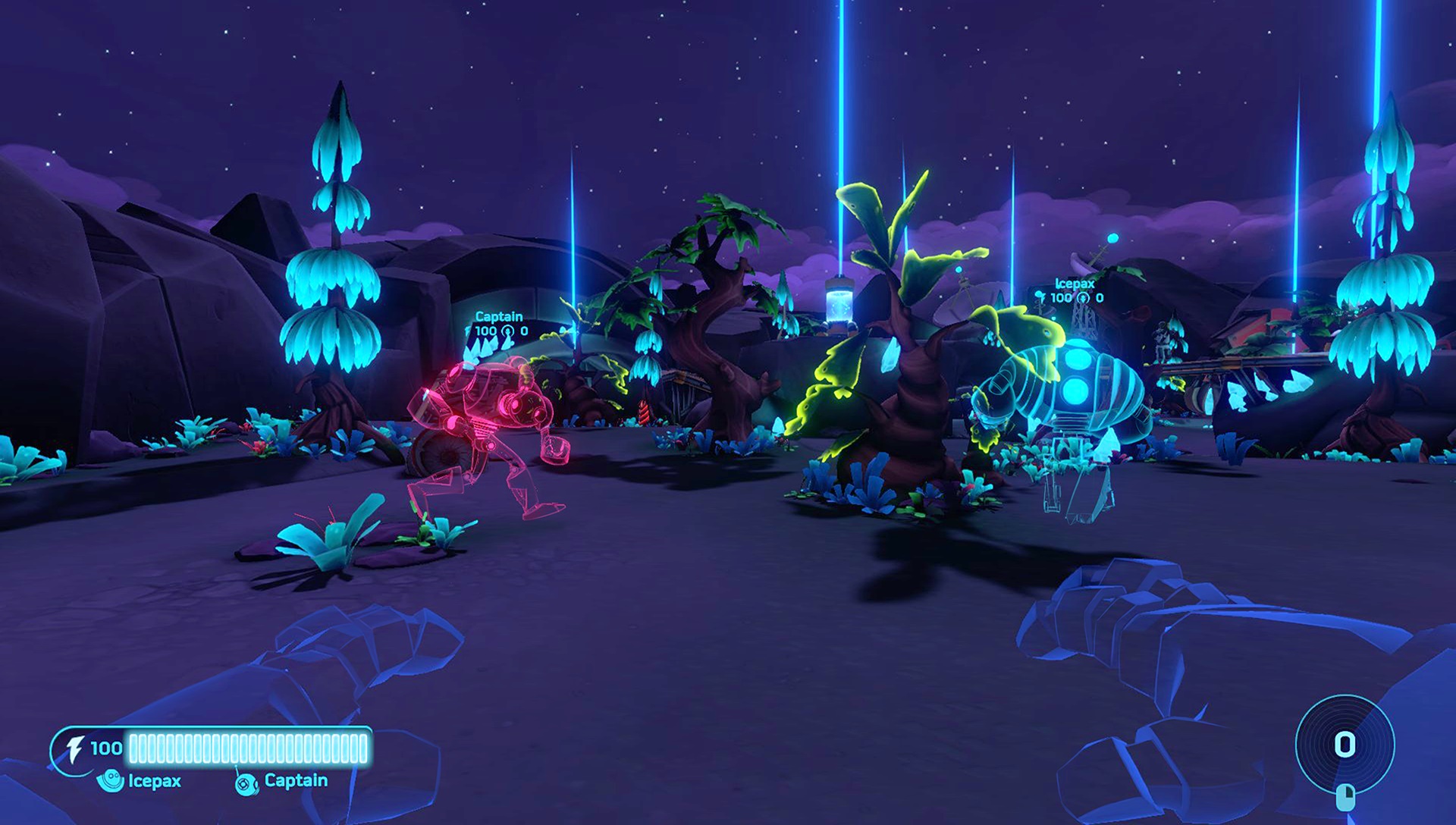 Robots are invisible to enforcers most of the time, but not to each other.

Both the robots and the enforcers have different classes to choose from.  For example, in my games, my enforcer used dual pistols, so they’d attack quickly, but each shot didn’t do much individual damage.  It also had a mine to set out, and could fire a sort of charged shot from both pistols that did substantially more damage. On the flip side, my robot of choice was named Turbo, and you can imagine what its ability was.  In fact, my choice turned out to be clutch, as I could quickly zip around the map and revive my fallen friends and escape before I could be taken out.

Games were incredibly fast paced, hectic, and enjoyable.  Teamwork and team composition seemed incredibly important on the robot side, while the Enforcer side was much more about how well you play together.  All-in-all, Aftercharge is a very enjoyable arena shooter that does bring some uniqueness and charm to the genre.