The idea behind this series is to both mildly entertain, and inform. My goal is to sit down with f2p MMOs that I have not spent enough time with, play them from level 1 to cap, and do as much content as I can. That way I can see just how viable it is for a player starting with nothing and working their way up through the game. I’ll post my findings, both positive and negative, in hopes that perhaps devs see what is in need of change/what is working, and what new players may have to be aware of. This first one is more casual, at the start of Blade & Soul. I’m uncertain if I’m just going to do one of these at a time, or cycle around. It would probably be easier to focus. I do hope this is something that people find, enjoy and gain some use out of.

I played Blade & Soul when it was around beta-full launch, and enjoyed it. But as it does hold a lot of open world/clan-based PVP, I wasn’t really sure it was for me. But I guess as long as you aren’t wearing the clan colors, it’s not a big deal. It’s a fun action MMO and one I haven’t really put much time into, so I figured this would be a fantastic idea to bring back my old “Adventurer’s Journal” idea. I had a level 5 or so Gunslinger from when I was going to go back to playing and potentially streaming Blade & Soul, so I figured I would just play them. That way I don’t have to decide on a new character. I can just jump right into the world! So, I took command of a terribly buxom dual-pistol wielding martial artist and moved into this world.

Thus, Tyrandamere was born. I don’t really know where I came up with that name, but it is a slight portmanteau of Tryndamere. The downside to the first few levels is that I’ve played through these quests so many times. As a result, I truthfully didn’t pay them too much mind. A lot of my time was spent putting bullet holes in an invading force, and the death of Master Hong, by Jinsoyun. I learned that the Adders and the Blackram were working together, two vile forces that were in definite need of justice. Pirates and Thieves were a major point of discussion in the first real playthrough, as the two groups now working together were proving to be a real thorn in the side of honest, hard-working people. So it was up to me to defeat them, with violence. That’s just what I did. From chasing off Kusim at the Dusk Adder Stronghold to setting things right with burning the Jiangshi bodies, a lot of hard work was done in this little crusade. Though I did completely forget where the oven was to drop the zombie corpse. 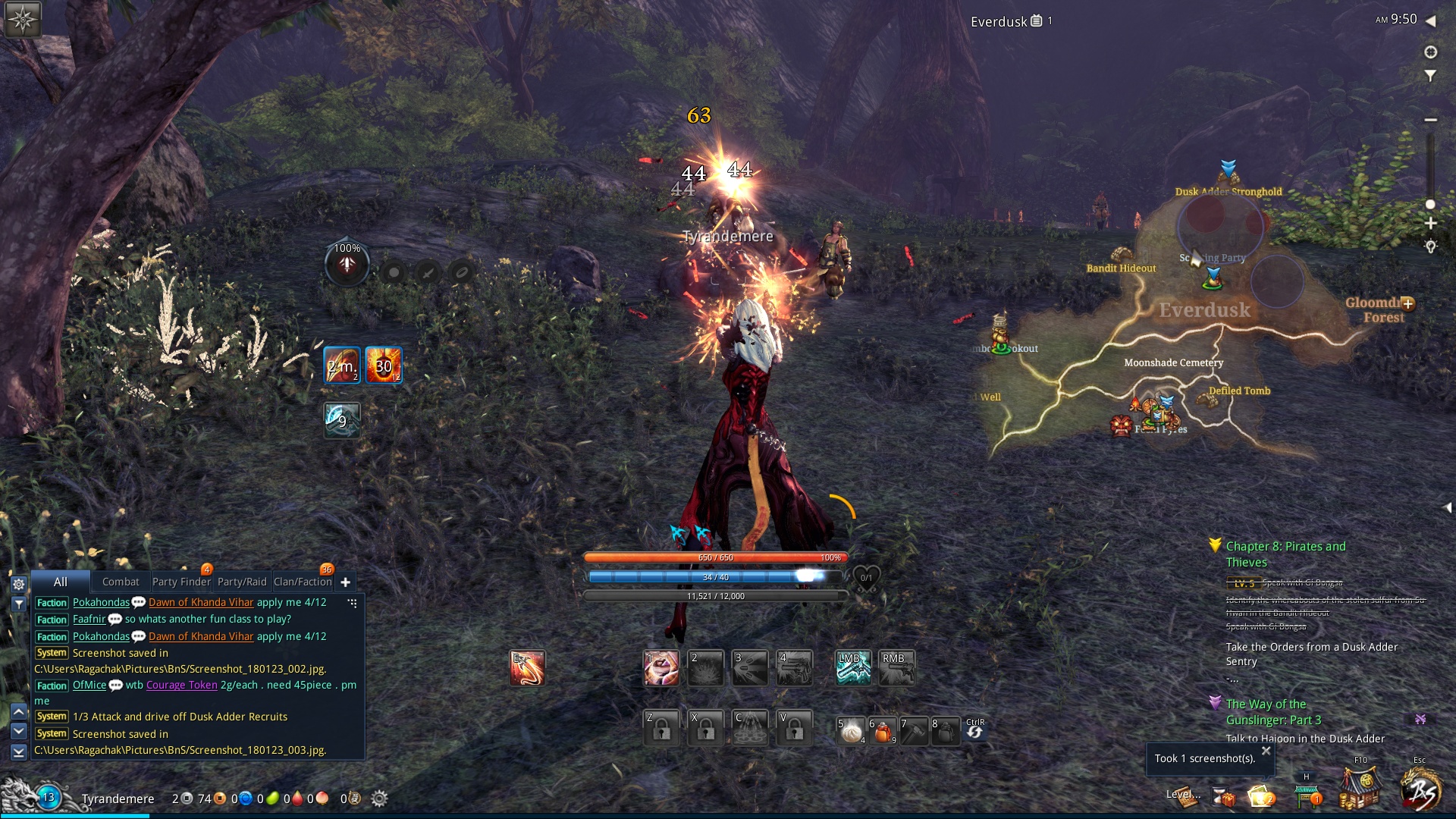 Yes, I call 'shooting them' a martial art. If it works, why argue?

However, there is one thing I certainly did not forget, and that was the first session of farming for items, which takes place at the Moonshade Cemetery area. There’s a powerful monster that roams those dead, vile grounds, and it’s very important to kill it every time It comes back. The contents of the treasure chest it drops allow you to spin a wheel. A curious, interesting wheel that gives everything from Locked Chests with powerful weapons (at random), costumes (very revealing on the Gunslinger, I have to say), or a set of “Profane Soul Shield” packs. From 3, 5, 8 pieces. The 8 piece might have all of the slots you need for set bonuses and useful stats, but I wouldn’t hold my breath. Mine did, but maybe I was just lucky for once. So I got a cool set of guns, a fancy, very revealing dress, and some stats. The regular Jiangshi can drop these as well, but it seems like it’s a better result from the bigger foe.

It seems like everything in this world wants stuff. Weird stuff, like pearls, teaching me how to repair my guns (by hammering them over and over at a bonfire. Don’t you cook at those?) and then there were the training sessions, by that mysterious masked martial artist. One of the things that I enjoyed about this set of play sessions, is that I had no idea what I was doing, other than my reload button and my auto attack. These are curiously swapped (LMB – Reload RMB – Open Fire). But you have a set of attack skills also, but no serious idea on how to use them. These two training sessions I underwent explained what I can do with my current abilities, by putting them to use against dummies, then actual targets. I had a very hard time with the Counter ability on the Gunslinger while doing the training, but not in actual combat, which is terribly curious. It’s important to me to learn these strategies, combos and other things in the actual world. This is a strange world though. These play sessions have taken me through 8 chapters of the story, and there’s so much more to go. Everdusk is so appropriately named though. A gloom hangs over the sky, high above the mountains, above the trees. It blots out the sun, but somehow, green things still grow here. Defiled Tombs, Bandit Hideouts, the Dusk Adders, everything here is very thematic. 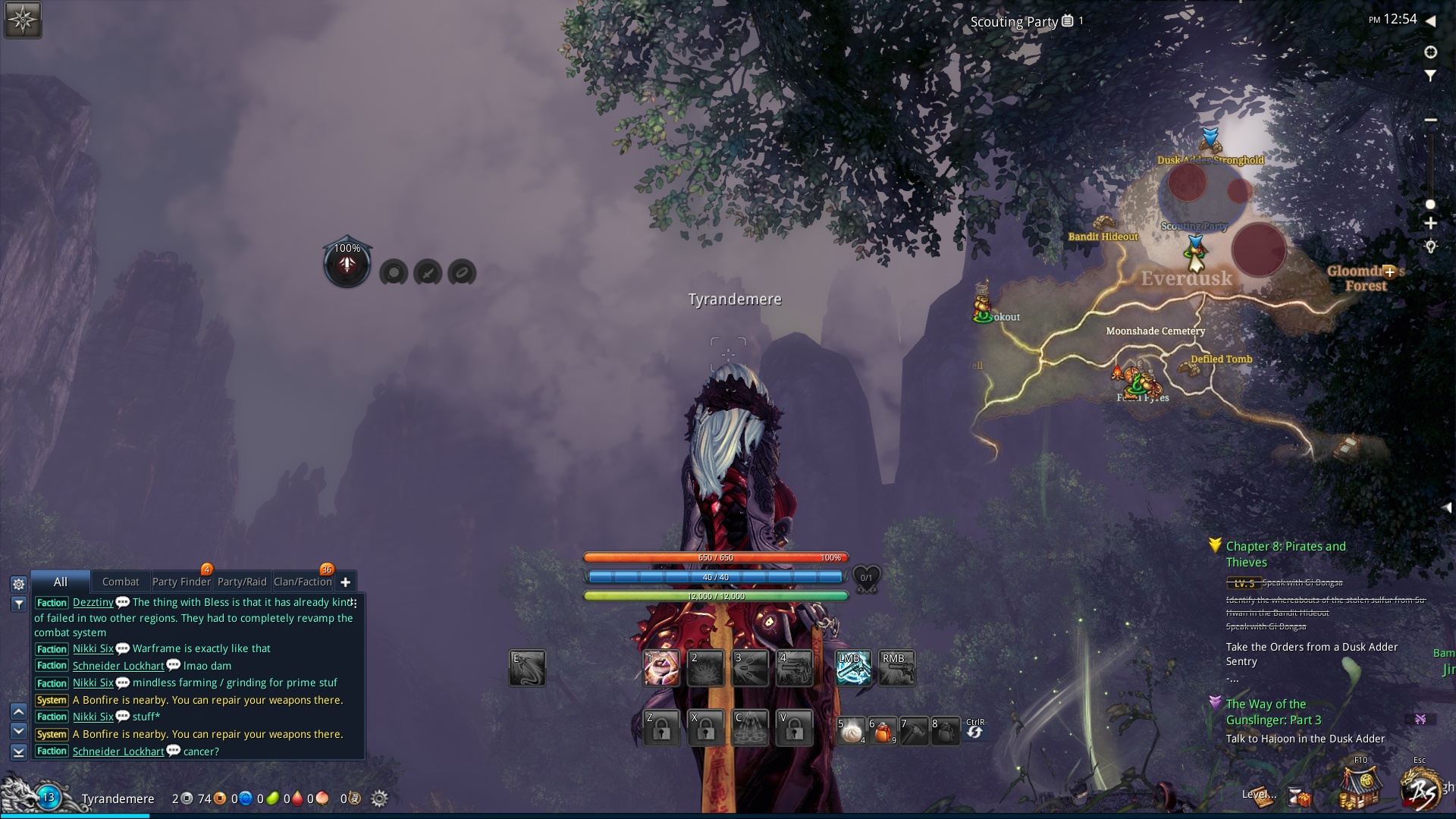 Above the mountains, above the trees, a gloom lurks.

It’s interesting to go from such a bright, cheerful home to this bleak existence. But I’ve learned much so far, with my thirteenth level. Sure, I can reload, and dash forward, pistols blazing. But there’s so much more to it than that! You have a counter ability that leads to a knock-down, meaning free damage. You can engage with the Hook, that also reloads with the pistol reload. It’s a great means of travel outside of your dash/leap/glide. Then there’s the explosive ammo mechanic. Gunners can use certain skills that will generate Explosive Ammo. This will enable a new skill, Unload, and all of these abilities are very powerful and worth spending time using in stronger fights. During regular encounters, I typically RMB and shoot everything before it gets to me, or try to practice my countering. It’s going to be very important one day, so I want to be prepared. I still have much to learn, as I head for my third lesson. I have to say though: I’ve never seen a world where so much bouncing goes on. It’s really quite phenomenal. I was going to try browsing the store for the Premium Account, but I did not see it in the Hongmoon Store. It primarily held cosmetics, costumes, stuff like that. Though there are also Revival Charms, Repair Hammers, Dyes, Patterns. I do wish you could hover over these to learn exactly what they did.