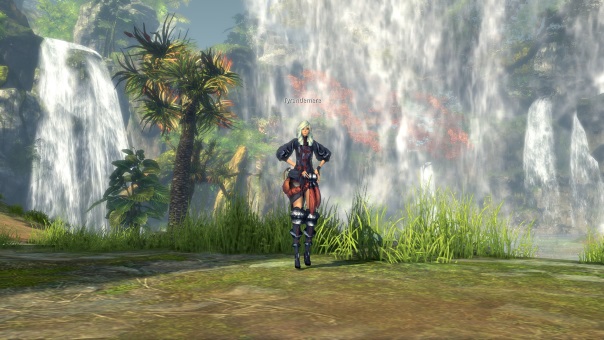 I spent way too long thinking I needed to crawl through a dungeon to proceed. However, I was not prepared for that, and instead, I needed to pray in front of an urn in this house. That would explain my confusion. That is what it meant to “Pay my respects”.  Far too much time has been spent in Jadestone Village doing nothing. There is a mission still before me. And it’s to kill … Venomous Plague Mites. Wait, no, that’s not it. I received a final letter from my master, who is now dead. He also takes the time to point out “gone” means “dead”, because even after all this time, he’s still a little snot, even beyond the grave. The fate of the Hongmoon School is in my hands. I have to learn more and spread Master Hong’s teachings. That is, however, not a jape. I must stop and do a brief treasure hunt to receive his last gift before we move forward into the world. I read his diary, and he’s just snotty and immature in it, but I wouldn’t have it any other way. Oh, and new clothes! Maybe this will close at the front? It does! The “Masked Hongmoon” outfit is now mine. Somehow it fits, despite it being on that shrimp. Unless he prepared one for me in advance. I guess I’ll never know. 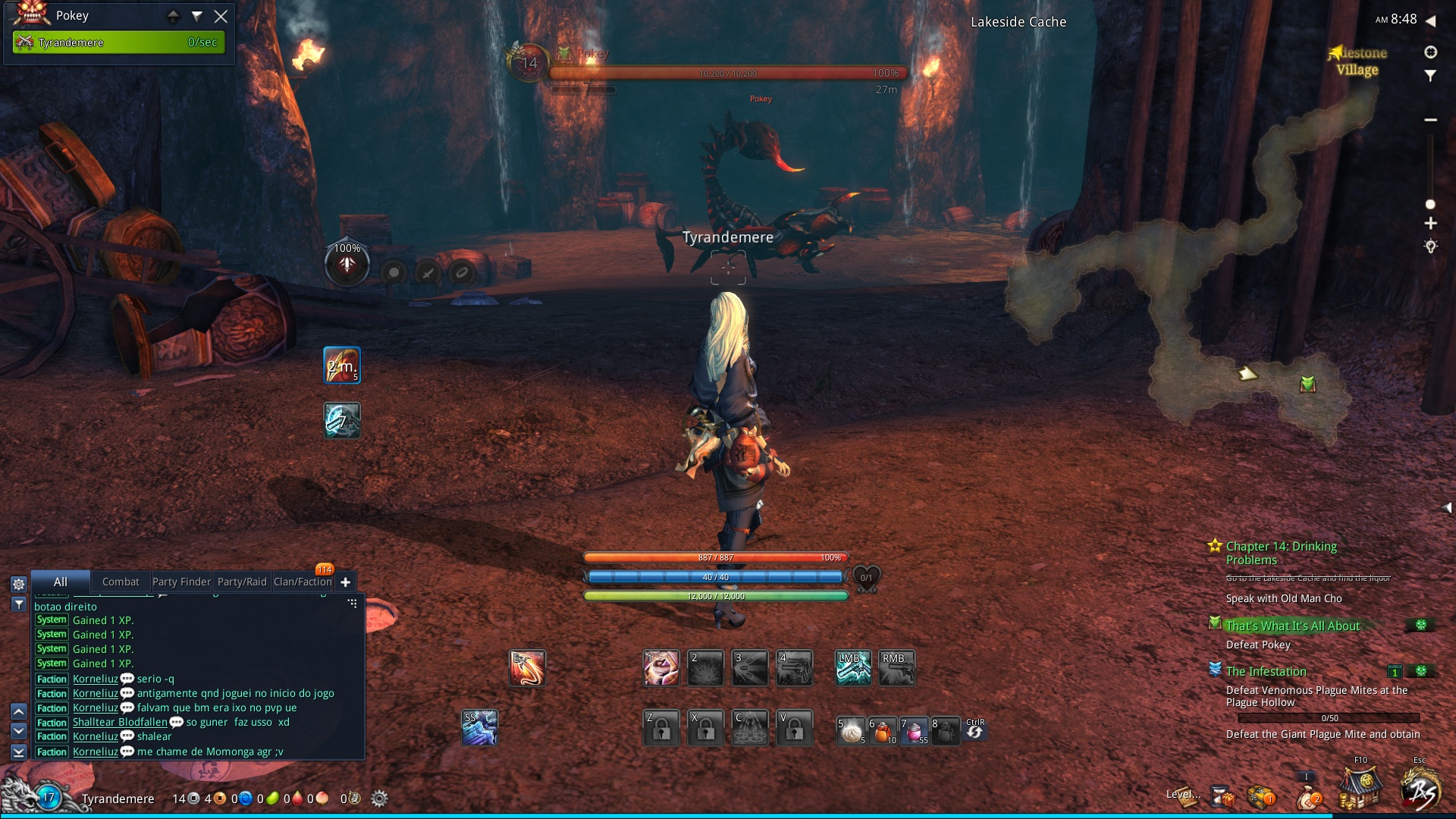 The word is that Jinsoyun is on her way to Songshu Isle in the south. Shu? Gross. However, the bridge was destroyed by someone, which is just so damn convenient. However, there’s also a convenient martial arts technique that can get me across the gap: Dragon Pulse. So, we head to the east, towards Pondskip Vale, which is a terribly appropriate name, if a bit on the nose, to see out this old man. What burden or task must I do for him to learn this ability? Like any good master, it’s something trite like “bring Juniper firewood”. I don’t know why I expected anything else. Then, pour water into his jar, from a smaller jar. You know what he said to me? “Congratulations. You can do menial chores. Your parents would be proud” and I won’t lie, I laughed at that. That’s very self-aware. Then he brings it back around and points out that Pulse Riding is dangerous and my chi needs a good shove to get going again. With my chi as it is now, I would certainly die, and I don’t want that. What I must do now, is seek out the Eight Masters, that are so very conveniently in the area. But he needs a cold one to crack open with the boys. So I’m off to a cave to fetch his booze for him. Yup, this is the Master I figured I would meet sooner or later. He sent a pupil after the booze but they never came back. “If he’s in there drinking my liquor, I want you to murder him. Well, maybe not murder. Rough him up a little”. So I’m off to beat up someone!

Alcohol is very important to this man. So we’re going to bring it to the Jadestone Tavern and meet him there. This was labeled a Dynamic Quest. “That’s what it’s all about”, and the goal is to defeat Pokey. This mission’s like an onion, it’s layers upon layers. The cave is infested with Koki Shaman, who look very much like frogs, or some kind of imp. Not a kappa, but close. Bomani wants to prove he’s the mightiest disciple, but unfortunately, he was very much outclassed. A few shots from my pistols put him in his place. This almost feels unfair, but my masters taught me that even my guns are a martial art. A gun-fu, if you will. Then he has the nerve to ask if it’s a normal thing I do, randomly assaulting innocent strangers in caves! Actually … no, that’s not really out of the ordinary for me I suppose. But he yelled at me about wanting to be the best. He’s not exactly innocent. He’s very drunk though. He’s not going to be this blurry violent jerk’s punching bag though. He’s going to get crazy strong, acquire huge muscles, then I’ll be sorry. But … he has no idea what I look like since he’s so drunk that I’m blurry. I have a feeling we’ll meet again someday. Now, before I leave this cave, I want to finish this “Dynamic Quest”, so it’s off to another part of the cave. It’s just like a martial arts training mission, only my master is dead. 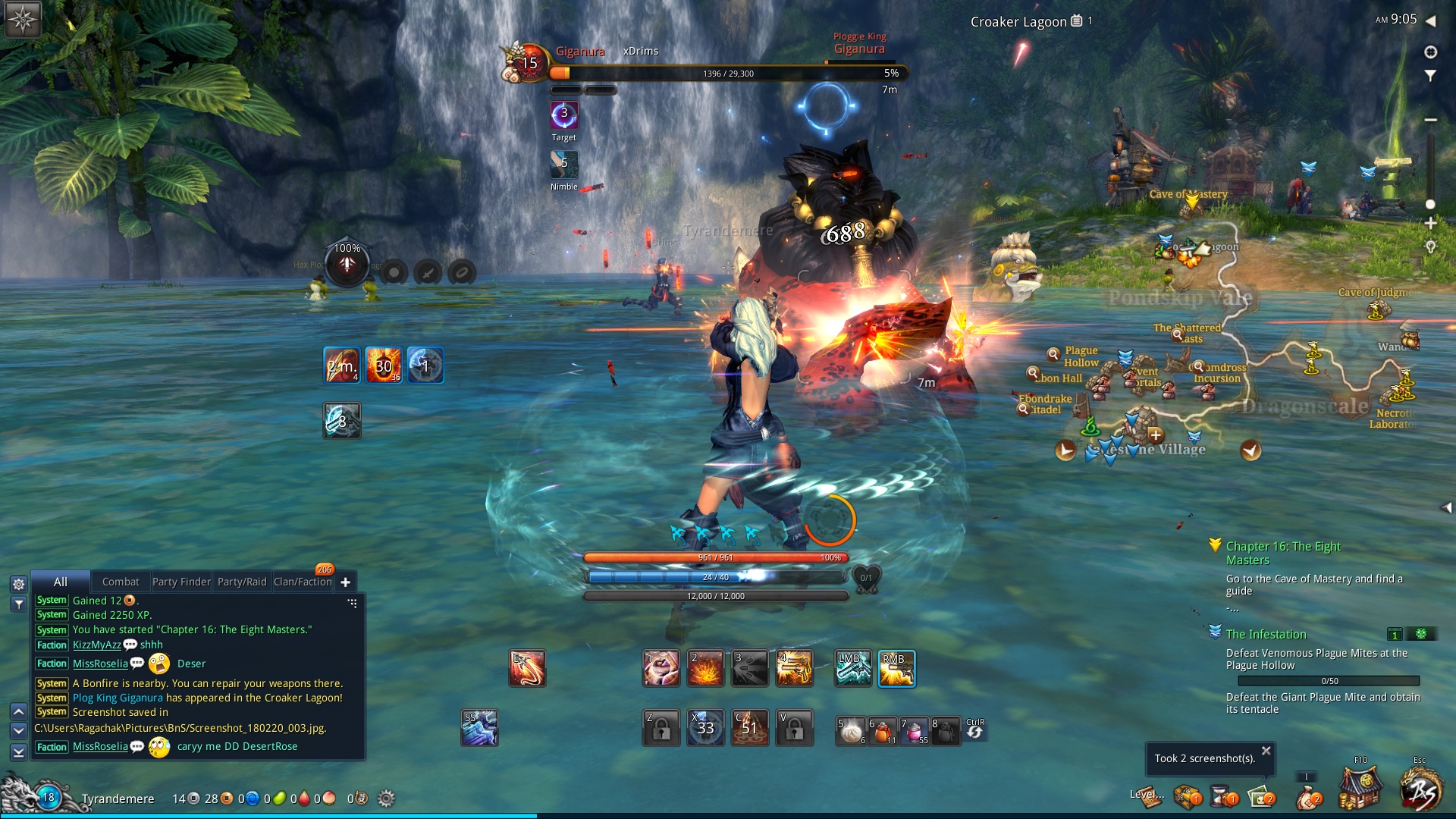 Before I enter the 'Cave of Mastery', this toad also seems to be aggressive.

Wow, this got dark sort of fast. As I wander this cave, I wonder if I’m the only gunner who reloads after every kill. It’s just a habit I got into. I’d hate to run out of shots, and I appear to never run out of reloading opportunities. These pistols must be chi-enchanted. Pokey, is not a man like I thought. It’s a massive, evil-looking scorpion. Scorpions are majestic creatures, so I feel a bit of pity taking it down. But what must be done, must be done. So I enter battle. He’s a very simple battle, but taking him down lands me a “Scorpion King’s Combat Soul Shard”, so I feel like if I keep coming back here, I can get something truly magnificent. Of course, he can’t “remember”, and now he needs food. So now I need to go get him some food, then he’ll clearly remember where the Eight Masters are. Why do I have a feeling that he’s getting me to do trivial things, just to send me to these masters? I’m going to be quite cross if this Pulse Riding is the same as simply running across water, only in the sky. So now we’re off to Old Man Jum’s house. By house, I mean on the side of the road, because he’s drunk too. “Bear gall pairs with everything. Beer, wine, Beerwine. The last one’s a secret invention of mine. Shhhhh. Don’t tell anybody” he says. . . I have a sneaking suspicion he just mixes them together in a big jug. My apologies, bears, but you must be slain for your gall. And of course, he’s no longer at the tavern. So I have to track him down, and he happens to be at “Croaker Lagoon”, near the “Cave of Mastery”. That’s where the masters are, but I need a guide. He sure won’t do it, he’s drinking and eating.

The next stop for me is this “Cave of Mastery” in Blade & Soul. What awaits within? I cannot say. I did not seek out a guide. Surely, it will be okay. Next, I write, it will be what awaited me in this foreboding place. The world is finally catching up to me, so now side-quests will be viable. To me, this feels very much like a long-form Kung-Fu film. Perhaps a serial. I enjoy it though, I like even the cliche of the dead master, the drunk master, and the secret masters. However, I do sort of wish I went into fewer caves. So. Many. Caves. Why does everyone in this world hide stuff in caves? I get that there’s no refrigeration and stuff, but ugh. It’s not a huge drawback, but it’s becoming pretty predictable.