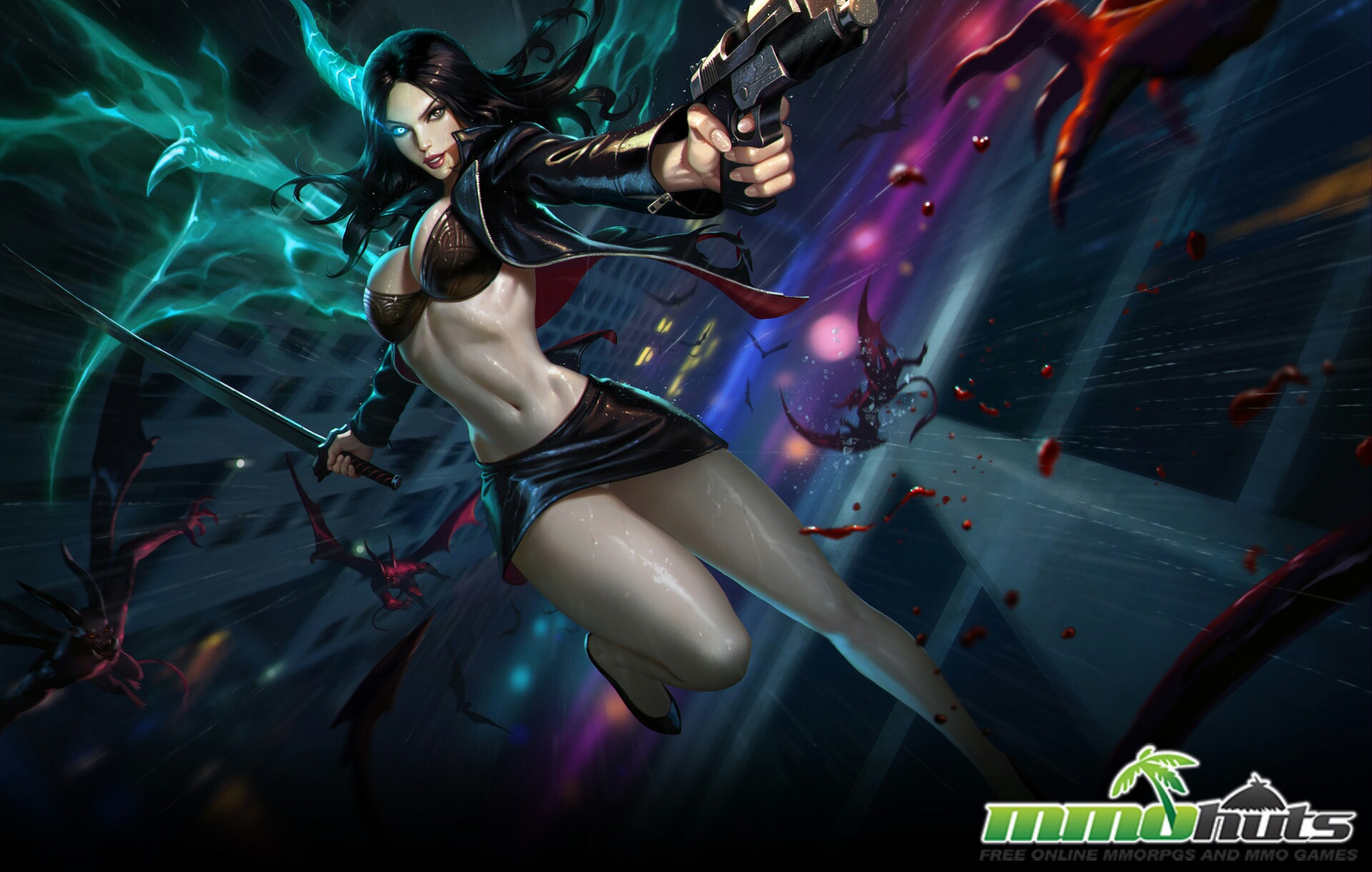 When it comes to the Mobile MOBA scene, Vainglory is the top dog right now. Being not just the first ever mobile MOBA game out there, but being finely made and regularly updated as well. With its current foothold on the mountain, it would seem that anyone else dipping their finger in the market share cake is going to get bashed by comparisons.

One of the first to step up to the task is Gaea Mobile’s creation, Ace of Arenas.

A Mish Mash of Various MOBAs

My first impression of Ace of Arenas is it’s a mish mash of the different MOBAS available today. In terms of aesthetics. AoA copies Dota 2’s skinning system where you not only buy the hero skins, but also hero weapons with cash. 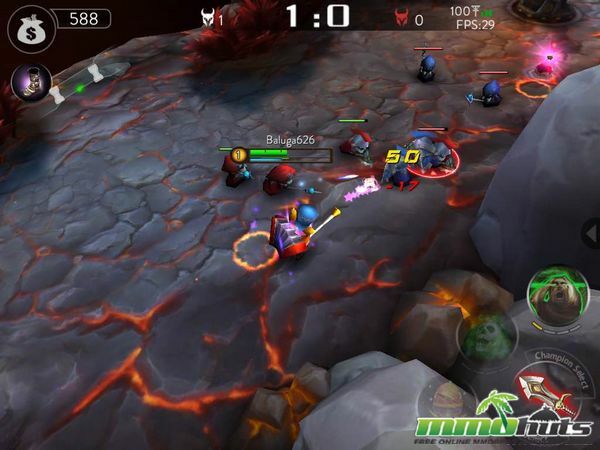 Visually combat is pretty nice for a mobile game.

Ace of Arenas also copies League of Legends’ rune system. This is done through an itemization purchasing system outside of matches, labeled as gems. Gems have stat enhancing capabilities which are similar to what League is offering to players as runes. In fact, AoA has the same amount of gem categories like League’s but the gem pages have fewer slots than its League counterpart.

Don’t even get me started with the game’s heroes. It would seem that AoA transplanted some heroes from League and DOTA both in terms of skills and appearance, with a few instances of at least a few visual inspiration pulls Heroes of the Storm. I can cite two examples here: one really good example is AoA’s Habbie. All of his abilities are similar to Teemo, even the way he speaks is similar to League’s most hated character. Another fine example is Thor, who at the core is just a reskinned version of Dota/Dota 2’s Zeus.

The only silver lining you can give Ace of Arenas on this front is that they’re only stealing from PC based competition not vying for the mobile market themselves. Aside from a few similar interface designs, Ace of Arenas is presented in an entirely different way from Vainglory. Still Ace of Arena’s presentation is a bit rough around the edges. 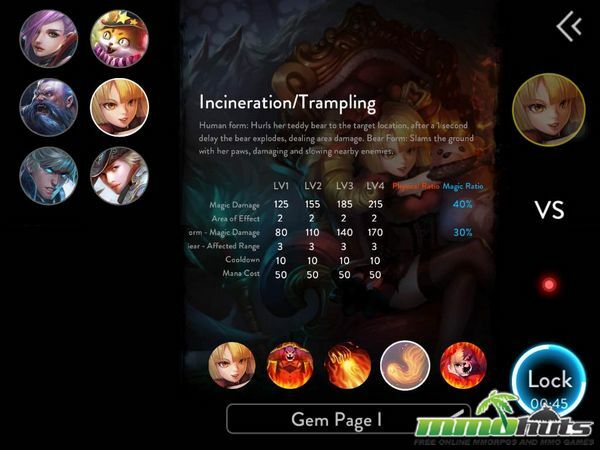 If you're not new to mobas, you may find some familiar faces here.

Now moving on to the difference between the two. AoA adopts the virtual gamepad control scheme whereas VG is purely a touch-based MOBA. This of course opens up tons of pros and cons for Ace of Arenas. Virtual Gamepads are known to not be the best option for games requiring more precise controls. In the MOBA setting for instance, you might find it rather challenging to be constantly moving your character, selecting an ability, and aiming the skill shot all at once. With how skillshot heavy Ace of Arenas is, the problem becomes apparent early on.

I personally would’ve wanted Gaea Mobile to just create their own customized control system, even if it ends up being just like VGs. Because based on my experience alone, I’ve had a few instances where I was tempted to throw my ipad to the floor because I missed an ult which potentially could have turned the tide of a match. For reference, it was Hiti’s ult that offers a confusing hit box to begin with. This fault in the controls makes characters reliant on kiting and crowd control skills inferior to the less skill intensive heroes that can simply auto attack their way to victory. 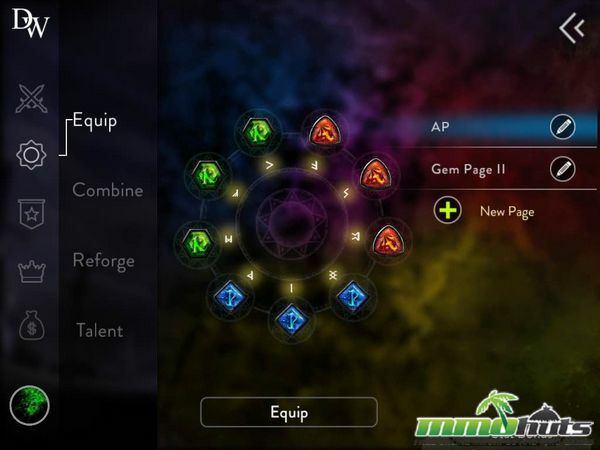 AoA doesn't reinvent the wheel, but it stole some pretty nice ones and added spinner rims.

Another problem I noticed is the lousy social media interconnectivity AoA has. You can login for premium cash rewards and all that just like your typical mobile game. However, the game doesn’t have a smooth transition to your Facebook like other games. And it doesn’t go directly to the FB app installed but opens a browser to log in instead.

Another thing that AoA lacks is a means to communicate with teammates. I mean I personally like that there’s no chatting system in-game since it deters a build-up of toxic conversations that competitive games are known for. I would’ve loved a phrasing comm. system just like hearthstone to at least make team coordination possible. But then, VG also doesn’t have one so maybe right now there isn’t a solution to this problem just yet.

Also, there is an upside to AoA’s decision to lift heroes straight from League and Dota. Many of their characters represent archetypes already popular and relatable to PC veterans of the genre. Plus their roster is rather massive for a freshly launched game. Seeing 25 heroes in the roster on launch day caught me by surprise. 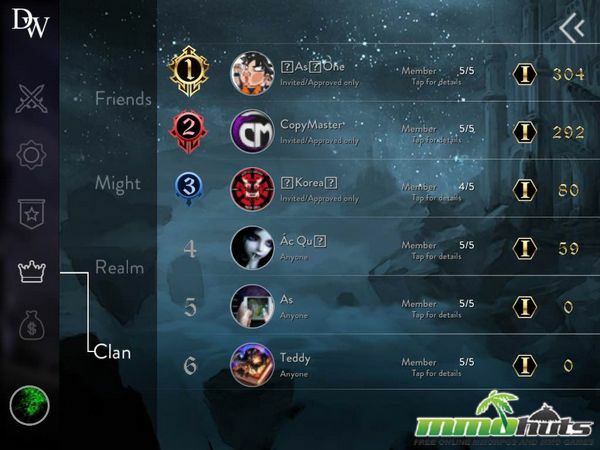 While rough around the edges, AoA has enough features to make some PC mobas jealous.

Another good thing to mention is that, AoA has more game modes compared to VG. You can participate in 1v1, 2v2 and 3v3 matches in Ace of Arenas. You can also go against bots, which the game boasts that no network is needed to play, but then, you can’t really log in the game if you don’t have an internet in the first place.

Ace of Arenas also has a clan, ranking and pilgrim system which adds more to the game’s replayability aside from just bashing heads in the arena.

Finally is the talent system in place where you can unlock stat boosts exclusive for the character.

At this point, Ace of Arenas isn’t too shabby. I mean sure Gaea Mobile really had its work cut out for them since they are trying to get a piece of the pie Vainglory has been eating for a while now. It’s clear that what AoA lacks in refined game features, it makes up in feature and roster numbers.

What I don’t like about this way of doing things though is it seems that Gaea Mobile doesn’t really trust the gameplay quality their game is providing. All these game features seem present as a distraction from the glaring issues holding AoA back from its full potential. Truth be told, some of the cons are enough to turn players off the game.

But then, the game is still new, and heck, even VG has its fair share of bugs and problems when it started. Look where it is now?
I can say that with a few more updates here and polish there, Ace of Arenas has a clear shot at being the #2 MOBA on the mobile market. Yet it’s going to be a distant second. AoA has a long ways to go to make Vainglory players jump ship.